Flowering plants integrate endogenous and external cues to accurately time the transition from vegetative to reproductive growth (Cho et al., 2017). Many plants, including Arabidopsis thaliana, sense changes in day length (photoperiod) to transition to flowering as the season changes. Decades of careful molecular genetic dissections have uncovered the photoperiod-induced flowering pathway of Arabidopsis, which is centered on sensing increases in day length within leaf phloem cells to activate the expression and transport of phloem-mobile florigen (FT, FLOWERING LOCUS T) to the shoot apical meristem to trigger the floral transition (reviewed in Song et al., 2015). 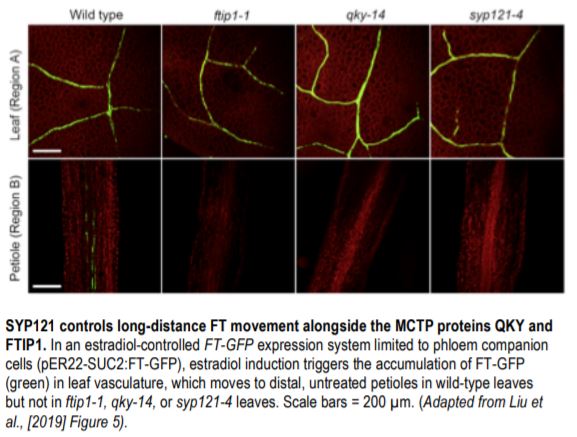 Next, the authors addressed whether QKY interacts with FT to regulate its transport from CCs-to-SEs during photoperiod-induced flowering. As anticipated, protein-protein interaction assays confirmed that QKY interacts with FT, much like the MCTP protein FTIP1 (Liu et al., 2012). To assess the extent to which QKY, SYP121, and FTIP1 contribute to FT movement, the authors performed elegant FT transport assays in the wild type and mutant backgrounds. Using an estradiol-inducible FT-GFP expression system limited to CCs (pER22-SUC2:FT-GFP), the authors demonstrated that estradiol treatment in wild-type leaves led to the accumulation and transport of FT-GFP in distally located untreated petioles. By contrast, FT-GFP was not detected in ftip1, qky, or syp121 petioles after estradiol induction in leaves (see Figure). Similarly, immunogold electron microscopy of plants transformed with SUC2:FT-9myc revealed FT in CCs and SEs in the wild-type background but in CCs and not SEs in the ftip1 qky, syp121 qky, and ftip1 qky syp121 backgrounds. Therefore, a QKY-SYP121 complex mediates FT movement from CCs to SEs through endosomal vesicular trafficking to the plasma membrane, which occurs alongside the FTIP1-mediated transport of FT through the endoplasmic reticulum. Together, these parallel mechanisms ensure that FT is transported long-distance through the phloem to induce the floral transition. 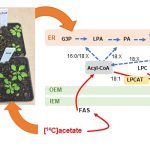