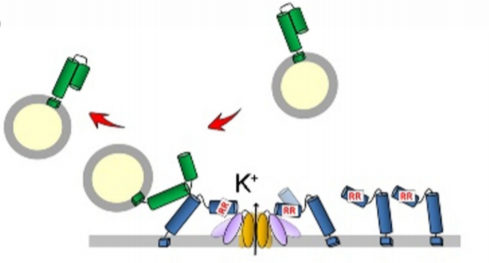 There are four classes of SNAREs characterized by the presence of either a conserved Arginine (R SNAREs) or Glutamine (Q SNAREs) (Qa, Qb, and Qc, depending on the location of the Q residue) within the SNARE domain, and one of each class is present in a functional SNARE complex (Grefen and Blatt, 2008; Karnik et al., 2017). Of the ~9 Qa SNAREs in Arabidopsis thaliana that localize to the plasma membrane, SYP (Syntaxin of Plants) 121, SYP122 and SYP132 are the major contributors to secretory vesicle trafficking (Kim & Brandizzi, 2012; Karnik et al., 2017). SYP121 and SYP122 are close homologs and have somewhat overlapping functions. However, SYP121 has unique roles in abiotic stress resistance, stomatal movement, as well as targeting, recycling and regulation of plasma membrane K+ channels (Karnik et al., 2017). This latter function has emerged as an important driver of cell expansion, as K+ is the most abundant inorganic solute in the cell and maintains the turgor pressure required for cell expansion (Honsbein et al., 2009; Honsbein et al., 2011). Despite these unique functions, SYP121 and SYP122 both assemble and operate with the same Qabc SNAREs and R-SNAREs. In general, while different vesicle trafficking pathways may employ common SNAREs, accessory factors dictate the specificity of each of these SNAREs toward specific vesicle trafficking pathways.

One such factor that preferentially interacts with SYP121 is the Sec1/Munc18 (SM)-family protein, SEC11. In animals and yeast, SM proteins prevent promiscuous interactions between SNAREs and accelerate vesicle fusion with the plasma membrane (Baker and Hughson, 2016). SEC11 in Arabidopsis binds to SYP121 to drive SNARE complex assembly and accelerates vesicle fusion, and evidence suggests this interaction accounts for the functional specificity of SYP121 (Karnik et al., 2013; Karnik et al., 2015). SEC11 has a major cleft that binds SYP121 in the closed, inactive conformation, preventing interaction with other SNAREs. Binding of the minor cleft of SEC11 to the N-terminus of SYP121 is proposed to promote the open, active conformation of SYP121, resulting in SNARE complex assembly and K+ channel activation (Figure 1A) (Karnik et al., 2017). The SEC11-SYP121 interaction additionally regulates recycling of components of the SNARE complex (Karnik et al., 2015).

Previous work established that a SEC11-SYP121 interaction occurs via an F9 residue located near the N-terminus of SYP121, a residue that is also present in SYP122. A SYP121-specific motif, F9xRF that includes the conserved F9 residue also participates in K+ channel binding, leading to a competitive binding model of SEC11 and K+ channels to SYP121, where SEC11- activated SYP121 binds and activates the K+ channel, displacing SEC11 from the F9xRF motif. The interaction between the K+ channel and SYP121 also displaces its cognate R-SNARE, which is a negative regulator of K+ channel gating (Figure 1A). This proposed “handshake” mechanism effectively coordinates SNARE complex assembly with channel activation (Zhang et al., 2015). Because of the presence of F9 in both SYP121 and SYP122, binding of SEC11 to this residue alone cannot explain the functional specificity and K+ channel gating activity of SYP121, suggesting the presence of a second binding site within the N-terminus of SYP121. In this issue of Plant Physiology, Zhang et al. (2019) set out to uncover the molecular mechanism of SEC11 binding to SYP121 in Arabidopsis in order to understand how SEC11 contributes to the functional specificity of SYP121 and to refine models of SNARE complex assembly and K+ channel regulation. 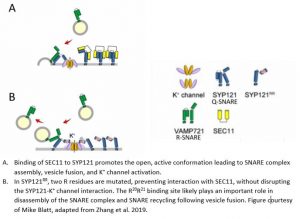 By swapping specific regions of the N-terminal domains of SYP121 and 122 that lack sequence conservation, the authors identified a second SEC11 binding site in SYP121 located ~11 amino acids downstream of the previously identified F9xRF motif that is absent in SYP122. They establish two key residues, R20 and R21, that when mutated in SYP121RR (R20A and R21A), abolish this interaction. To establish the in vivo significance of this second SEC11 binding site, Arabidopsis plants stably expressing modified versions of SYP121 were transformed with a SEC11-derived peptide, SEC11D149, that binds to SYP121 and blocks its function in vivo (Karnik et al., 2015). The mutant SYP121RR abolishes SEC11D149-dependent inhibition of secretion in a YFP-based secretion assay in Arabidopsis plants. Furthermore, domain swapping of the region that contains the second binding site with the same region in SYP122, as well as the SYP121RR mutant, closely phenocopy the syp121 mutant in terms of root and hypocotyl growth. The authors also measured K+ and osmotic content, which are indicators of the K+ channel regulatory function of SYP121. Consistent with previous findings that the first SEC11 binding site within SYP121 (the F9xRF motif) interacts with K+ channels (Zhang et al., 2015), mutation of this region of SYP121 had the most drastic effect on both K+ and osmotic uptake. Mutation of the second SEC11 binding site had a more modest effect on K+ content relative to mutation of the F9xRF motif, and did not significantly affect osmotic content. These observations provide convincing evidence that the disruption of this newly identified second binding site within SYP121 interferes with SEC11 binding without disrupting the SYP121-K+ channel interaction (Figure 1B). The authors also point out that the SYP121RR mutation is sufficient to eliminate the dominant negative effects of the SEC11D149 peptide, demonstrating that the growth phenotypes caused by SEC11D149 are primarily due to its interaction with SYP121, even though SEC11 binds SNAREs involved in other vesicle trafficking pathways within the cell, for example, with SYP111, which is active during cell division to form the cell plate (Waizenegger et al., 2000; Assaad et al., 2001).

This work provides a molecular explanation for the ability of SEC11 to specifically bind to SYP121, and not to its closely related homolog, SYP122. The identification of a second binding motif within SYP121 also has implications for models of SNARE complex dynamics, whereby binding of SEC11 to the second R20R21 binding site within the N-terminus of SYP121 allows for an interaction with SEC11 subsequent to SEC11 displacement from the F9xRF motif by a SYP121-K+ channel interaction. This second binding site therefore likely plays an important role in disassembly of the SNARE complex and SNARE recycling following vesicle fusion, which requires SEC11 and is important for efficient vesicle trafficking to the plasma membrane (Figure 1B). These exciting observations begin to unravel how vesicle trafficking and solute uptake in plant cells have been coupled to efficiently facilitate cell expansion and ultimately plant growth. 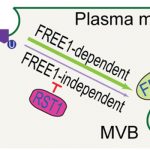 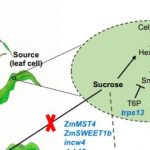 Senescence: the genetics behind stay-green corn
Scroll to top