Molecules based on 1,3,5-triazine are rare in nature. Most 1,3,5-triazine compounds are anthropogenic and have only existed in the last 150 years. Because it is easy to synthesize, 1,3,5-triazine is often employed as a modular scaffold in industrial applications, including the synthesis of medicines, resins, agrochemicals, and reactive dyes. The highly stable nature of triazine compounds leads to their persistence in the environment. Some plants have the ability to degrade these compounds into metabolic intermediates, many of which accumulate in soil and streams in agricultural areas. 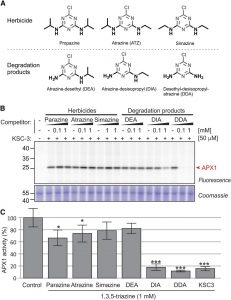 Although bioactivities have been reported for 1,3,5-triazines in plants, little is known, with the exception of the herbicide atraxine, about the direct targets of these compounds in plants.. Morimoto et al. (10.1104/pp.19.00481) show that small 1,3,5-triazines selectively target ascorbate peroxidases (APXs) in Arabidopsis (Arabidopsis thaliana), tomato (Solanum lycopersicum), rice (Oryza sativa), maize (Zea mays), liverwort (Marchantia polymorpha), and other plant species. One 1,3,5 triazine probe in particular, called KSC-3, selectively binds APX enzymes, both in crude extracts and in living cells. KSC-3 blocks APX activity, thereby reducing photosynthetic activity under moderate light stress, even in apx1 mutants. This suggests that APX enzymes in addition to APX1 protect the photosystem against reactive oxygen species. Profiling APX1 with KCS-3 revealed that the catabolic products of atrazine, which are common soil pollutants, also target APX1. KSC-3 should prove to be a powerful chemical probe in studying APX enzymes in plants. 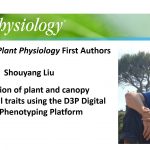 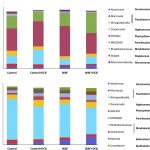 Role of Polysaccharide Synthesis in Diatoms
Scroll to top