By now we’re probably all familiar with the central dogma of auxin signalling; that the interaction between auxin and auxin receptors (e.g., TIR1) leads to degradation of Aux/IAA proteins, freeing up ARF transcription factors to do their things. The complexity of this simple system arises in part due to the large numbers of all of the constituent parts. Reed et al. have used a genetic approach to tease apart the roles of several ARFs in the hypocotyl elongation response. They generated multi-mutations in several ARFs, and combined these with microRNA constructs that specifically silence various ARFs. Hypocotyls became progressively shorter as additional ARF genes were knocked out, demonstrating overlapping functions for the ARFs. Furthermore, the mutants primarily affected hypocotyl elongation in conditions in which auxin promotes rapid elongation e.g., response to darkness, far-red light or high temperatures. The knock-out lines showed some but reduced responses to gibberellins and brassinosteroids, suggesting that these other growth-promoting hormones can compensate to some extent for the loss of auxin response. (Summary by Mary Williams) Plant Physiol. 10.1104/pp.18.00718 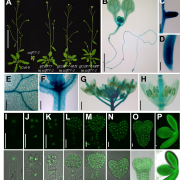 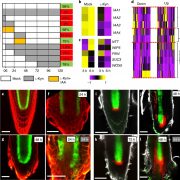 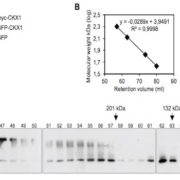