The acid-growth theory was proposed over 40 years ago based on early observations that low apoplastic pH promotes growth in a pathway involving the plant hormone auxin (Rayle and Cleland, 1992; Hager, 2003; Arsuffi and Braybrook, 2018). Since this discovery, a clearer understanding of the mechanism behind acid growth and its regulation is beginning to surface. Apoplast acidification is mediated by proton pumping ATPases (H+-ATPases) in the plasma membrane (PM). Auxin induces acid growth via a signaling cascade that (among many other effects) induces expression of PM H+-ATPases, and stimulates H+-ATPase activation via phosphorylation (Hager et al., 1971; Hager, 2003; Arsuffi and Braybrook, 2018). Low apoplastic pH causes loosening of the cell wall, and the activation of ion channels drives osmotic water uptake and cell expansion (Rayle and Cleland, 1992; Hager, 2003; Majda and Robert, 2018). Secretory vesicle traffic provides a membrane source and delivers cell wall materials to the expanding cell, and also controls the density of PM transporters through regulation of exo- and endocytosis (Geldner et al., 2003; Grefen and Blatt, 2008). While the connection between auxin and H+-ATPase activity/PM density is well known, there are many questions remaining about how these critical transporters are trafficked to the PM.

SNARE proteins are essential for intracellular vesicle trafficking and mediate fusion of vesicles to target membranes (Grefen and Blatt, 2008). SNAREs are classified based on the presence of either a conserved Glu residue (Q-SNARE) or Arg residue (R-SNARE) within the four-helix bundle SNARE motif. Q-SNAREs are typically localized to target membranes, while R-SNAREs are found in vesicle membranes. During membrane fusion, Q- and R- SNAREs form a ternary complex containing three Q-SNAREs, one from each of the Qa, Qb, and Qc class (defined by the location of the Q residue within the four-helix bundle), as well as their cognate R-SNARE (Grefen and Blatt, 2008; Baker and Hughson, 2016). Three PM-localized Qa-SNAREs in Arabidopsis thaliana, SYNTAXIN OF PLANTS 121 (SYP121), SYP122, and SYP132, are expressed throughout plant development, although SYP132 is present at relatively lower levels. SYP121 and SYP122 mediate the majority of PM trafficking and have some overlapping and distinct functions (Karnik et al., 2017). In this issue of Plant Physiology, Xia et al. (2019) identify a role for the Qa-SNARE SYP132 in trafficking of H+-ATPases to the PM to facilitate acid growth.

To investigate the effects of SYP132 on trafficking of one of the major H+-ATPases, AHA1, fluorescent-protein fused versions of both proteins were transiently co-expressed in tobacco (Nicotiana tabacum) epidermal cells. When expressed with SYP132, AHA1 exhibited a punctate fluorescence pattern characteristic of internalization, in contrast to the PM localization of AHA1 when expressed on its own. Internalization was not observed when either SYP121 or a dominant negative version of SYP132 (SYP132HabcD) was coexpressed with AHA1, confirming this effect is due to SYP132 activity. SYP132 (and SYP132 HabcD) co-expression had similar effects on AHA1 in Arabidopsis root hairs, where internalization of AHA1 was coincident with the endocytic dye FM4-64, confirming that SYP132-dependent internalization of AHA1 occurs via endocytosis. AHA1 trafficking was further explored in two Arabidopsis mutants defective in clathrin-mediated endocytosis – chc1, a clathrin heavy chain mutant; and HUB1, an inducible dominant negative mutant (Kitakura et al., 2011; Larson et al., 2017). In both of these mutant backgrounds, co-expression with SYP132 no longer promoted AHA1 internalization and AHA1 remained mostly at the PM, suggesting SYP132-dependent internalization of AHA1 is due to an increase in endocytosis. Using Arabidopsis plants stably expressing varying levels of SYP132 either by overexpression of SYP132 with a constitutive promoter (SYP132-OX), or use of the syp132 heterozygous mutant (syp132T), levels of AHA1 internalization were shown to positively correlate with SYP132 levels. This result was confirmed more generally for PM H+-ATPases using cell fractionation. Furthermore, SYP132 overexpression (which induces AHA1 internalization) resulted in an increase in apoplastic pH, while apoplastic pH in syp132T was decreased relative to wild type. In line with these observations, SYP132-OX plants were smaller and had shorter hypocotyls in dark-grown seedlings. Altogether, these results support the hypothesis that SYP132 is a negative regulator of H+-ATPase trafficking to the PM by stimulating their internalization via endocytosis (Fig. 1A). 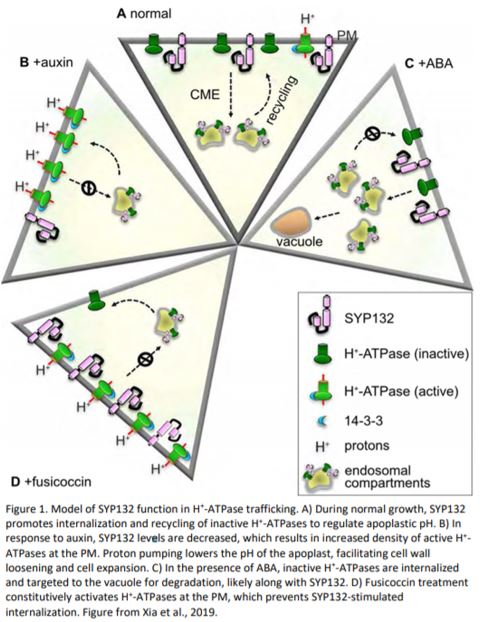 Given that auxin regulates acid growth, the authors examined the relationship between auxin and SYP132. Taking advantage of the known differential effects of high auxin treatment (~10 μM) on shoot and root growth (Evans et al., 1994; Velasquez et al., 2016), SYP132 transcript levels were measured following high auxin treatment. SYP132 expression decreased in the shoot where growth is promoted, and increased in the root where growth is inhibited, consistent with the observed correlation between SYP132 levels and H+-ATPase trafficking and acid growth (Fig. 1B). Similarly, SYP132 levels correlated with stomatal aperture size, which is heavily dependent upon auxin and active H+-ATPase density at the PM (reviewed by Jezek and Blatt, 2017) – SYP132-OX plants had smaller stomatal apertures on average relative to syp132T. Fusicoccin (FC) is a fungal phytotoxin that activates H+-ATPases (and other transporters) by stabilizing their interaction with 14-3-3 binding proteins (Olsson et al., 1998).  FC increased stomatal opening in all plants including SYP132-OX, demonstrating that the negative effect of SYP132 overexpression can be rescued through constitutive activation of H+-ATPase channels. FC treatment increased total H+-ATPase levels; however, in SYP132-OX plants, this translated into an increase in the PM:internal membrane density of H+-ATPases, indicating that FC prevents SYP132-dependent internalization of active H+-ATPases (Fig. 1D). Together, these data suggest that internalization of H+-ATPases is also tied to their activation state. In the activated state, H+-ATPases undergo less SYP132-dependent internalization/recycling than in their deactivated state, possibly providing a mechanism for fine-tuning active H+-ATPases at the plasma membrane.

In addition to regulation by auxin, it has been previously documented that ABA negatively regulates H+-ATPase levels, which involves the tonoplast localized R-SNARE VAMP711 (Xue et al., 2018). In both WT and SYP132-OX plants, total H+-ATPases were decreased upon ABA treatment, likely via vesicle transport to the vacuole. SYP132 levels were also decreased in ABA-treated SYP132-OX plants, suggesting they are also degraded by targeting to the vacuole (Fig. 1C).

Together the results presented by Xia et al. (2019) clearly show that the Qa-SNARE SYP132 plays a role in intracellular trafficking of H+-ATPases and contributes to the regulation of auxin-mediated acid-growth. The effects of SYP132 on H+-ATPase trafficking are somewhat counterintuitive, since SYP132 is a target SNARE localized to the PM. SYP132 as a negative regulator of H+-ATPases raises many questions of how, mechanistically, SYP132 may perform this function. There is evidence that SYP132 interacts directly with H+-ATPases (Fujiwara et al, 2014), and it would be interesting to investigate if other accessory factors contribute to the observed negative regulation of H+-ATPase targeting. Future work aimed at investigating SYP132 interactions and the link between H+-ATPase activation and SYP132-dependent trafficking will be important for understanding how apoplast acidification is fine-tuned by hormones during growth and development.

Hager A, Menzel H, Krauss A (1971) [Experiments and hypothesis concerning the primary action of auxin in elongation growth]. Planta 100: 47-75

Jezek M, Blatt MR (2017) The Membrane Transport System of the Guard Cell and Its Integration for Stomatal Dynamics. Plant Physiol 174: 487-519

Olsson A, Svennelid F, Ek B, Sommarin M, Larsson C (1998) A phosphothreonine residue at the C-terminal end of the plasma membrane H+-ATPase is protected by fusicoccin-induced 14-3-3 binding. Plant Physiol 118: 551-555 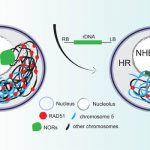 The nucleolus protects the repetitive rDNA during meiosis
Scroll to top