The yield of key food crops (i.e., wheat [Triticum aestivum], rice [Oryza sativa], maize [Zea mays], and sorghum [Sorghum biocolor]) relies on their production of seeds, while the propagation of almost all crops is seed-dependent. Seed set in turn relies on the production of flowers containing the male and female gametophytes, successful fertilization, and the subsequent growth and development of the embryo and endosperm. Temperature fluctuations often have a particularly detrimental effect during reproduction with extremes leading to a reduction in fertility in many plant species. Thermosensitivity in response to heat results from developmental or physiological effects on meiosis during male and female gametogenesis, pollen tube germination and growth, fertilization, and subsequent development of the seed (Giorno et al., 2013; Saini, Sedgley and Aspinall, 1983). Cell-to-cell interactions between the gametophytic tissues may also be disrupted (Giorno et al., 2013). With climate change set to increase the frequency of extreme weather events, it is imperative to understand how heat and cold affects each of the steps from flower initiation to seed development, and how these effects can be mitigated.

Anther and pollen development are more sensitive to temperature fluctuations than are other steps in gametophyte development, fertilization and seed set (e.g., (Warrag and Hall, 1984; Erickson and Markhart, 2002; Kim, Hong and Lee, 2001). As an example of the impact of a heatwave, under higher temperatures tomato (Solanum lycopersicum) pollen grains accumulate less starch prior to anthesis and less soluble sugars at anthesis (Pressman, Peet and Pharr, 2002). Starch accumulation during late stages of pollen grain maturation is important as it provides an energy source for the male gametophyte during germination and pollen tube growth. Heat stress also affects mono- and disaccharide levels, leading to decreased glucose and fructose and increased sucrose levels in tomato pollen (Sato et al., 2006).

In this issue of Plant Physiology, Begcy, Dresselhaus, and colleagues from the University of Regensberg, Helmholtz Center Munich and University of Vienna present a study on the longer-term effects of transient heat stress on subsequent pollen development and fertilization in maize (Zea mays; (Begcy et al., 2019)). Plants with pollen grains at the tetrad stage were subjected to two days of heat stress followed by physiological and morphological analysis. Two weeks later, the mature pollen was examined by developmental and morphological assays, metabolomics, transcriptomics.

Begcy and colleagues validated the immediate effects of their heat stress treatment through the presence of tetrad microspores with irregular morphology. Interestingly, staining with the DNA and tubulin-binding compound 4’,6-diamidino-2-phenylindole (DAPI; (Bonne et al., 1985)) led to less intense colouration of heat-stressed microspores, indicating that DNA may be damaged or decondensed, the cytoskeleton influenced by increased temperature, or the cell wall affected in such a manner that DAPI uptake is impacted. Whether reduced DAPI staining is transient or continues throughout pollen development once maize plants are returned to more conducive temperatures remains to be tested. 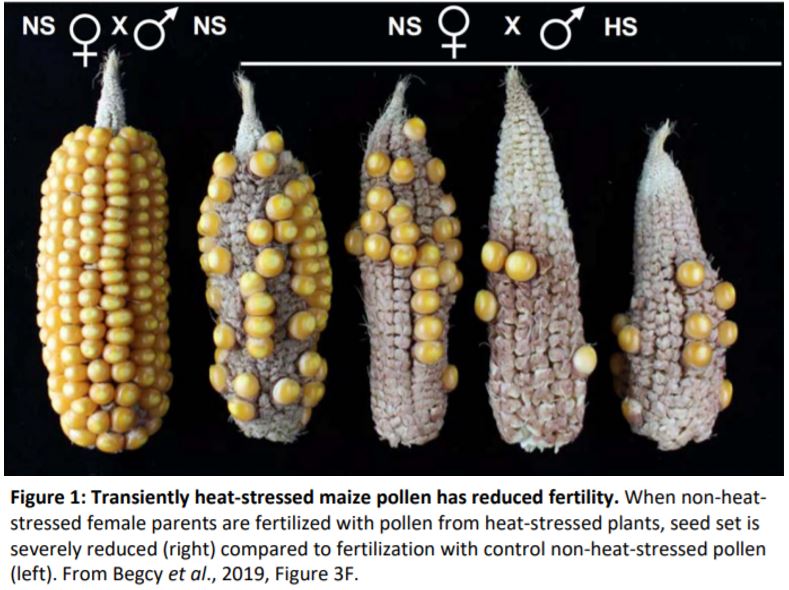 Having confirmed that two days of heat stress at an early stage of gametogenesis is sufficient to affect short-term maize pollen development, the authors turned their focus to the longer-term effects of this transient increase in temperature. Histological analysis demonstrated a delay in some aspects of pollen development that is evident as the grains mature. Loss of pollen adherence to the anthers was accelerated, which may be linked to the low germination and fertilization rates of pollen from heat-stressed plants (Figure 1).

At a metabolic level, starch granules and total starch were reduced in mature pollen grains from heat-stressed plants, as has previously been observed in tomato (Pressman, Peet and Pharr, 2002). To test whether this decrease in starch was caused by enzymatic limitations, mature pollen grains were stained with fluorescein diacetate, a vital stain which is hydrolysed non-specifically by esterases, lipases, and proteases. The authors speculate that the reduction in photoassimilates could have affected enzymatic activity, influencing starch/sugar levels and lipid composition and hence pollen grain function. To more directly link changes in photoassimilates with pollen viability and alterations in metabolites, transient heat stress will need to be applied to only non-reproductive or reproductive tissues and the assays focused on the activity of specific enzymes.

A detailed transcriptomic and metabolomic analysis of mature pollen grains followed. RNA-seq identified a subset of genes with differential expression between transiently stressed and control pollen grains, including those encoding heat shock proteins, a potential regulator of apoptosis, and a JAZ/TIFY protein that may repress expression of transcription factors involved in plant defence along with other up-regulated genes linked to stress responses. Further analysis of the RNA levels of transcription factors showed induction of some families which are usually expressed during early pollen development rather than in mature pollen (MYB and MYB-related), and down-regulation of other families that are more usually expressed later in pollen development (Golden-like 2; GLK). Genes linked to translation and growth were down-regulated, while a correlation analysis revealed mis-regulation of a number of kinases. In some instances, changes in gene expression could result from differences in the development of the mature pollen grains after transient heat stress. Further analysis of specific signalling and cell wall-associated protein families did not identify global changes in gene expression. Auxin responses were also not altered in mature maize pollen despite a decrease in auxin levels in anthers of other plant species upon heat stress (Sakata et al., 2010).

One outcome of the RNA-seq correlation analysis was identification of mis-regulated genes involved in carbohydrate metabolism, with down-regulation of ADP-glucose pyrophosphate, phosphate dehyrdrogenase and enolase, and up-regulation of an invertase and a phosphofructokinase. Gas chromatography confirmed that transcriptional changes were accompanied by increased fructose, sucrose and glucose levels while pyruvate was decreased, with the increase in sucrose echoing previous results from tomato (Sato et al., 2006). The decrease in pyruvate could conceivably be linked to lipid biosynthesis and basic metabolism as pyruvate is used in the generation of acetyl-coenzyme A (acetyl-CoA), which in turn is used in the synthesis of lipids and ATP. Metabolic analyses indicated a decrease in long chain saturated fatty acids and increase in long chain unsaturated fatty acids that could limit the germination of pollen and growth of pollen tubes due to their reliance on lipids for cell membrane formation. Therefore, even two weeks after a transient heat stress, the effects on the transcriptome and metabolome are likely to result in reduced male gametophyte viability due to changes in lipid composition and energy biosynthesis via pyruvate.

Whether this knowledge can be used to make grains and seeds more thermotolerant remains to be explored. The applicability of these results to further crop species will also need to be confirmed. Conceivably, crop varieties could be bred or developed that retain higher starch levels and pyruvate levels, lower sucrose, glucose, and fructose levels, and normal lipid profiles under transient heat stress. The expectation is that pollen viability may be retained at a higher level in such plants upon transient heat stress and thus thermotolerance could be increased in the face of more frequent heatwaves. 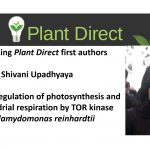