Plants have evolved highly sophisticated signalling systems that enable them to coordinate growth and development and respond rapidly to environmental fluctuations. These long-range signals can take the form of mobile small molecules such as phytohormones and RNAs, but can also be electrical signals associated with waves of calcium (Ca2+) and reactive oxygen species (ROS). The systemic signal is propagated to distal tissues extremely rapidly, at speeds ranging from ~100 to >1000 µm s–1, which approaches rates of nerve conduction in animals (Choi et al., 2016).

In addition to its role in long-distance systemic signalling, elevated cytosolic Ca2+ ([Ca2+]cyt) concentrations in the immediate vicinity of the stimulus site also demonstrate its involvement in local (within a single leaf) intercellular signaling. Ligand-gated cation channels in the plasma membrane (PM) permit Ca2+ influx into the cytosol, of which the cyclic nucleotide (cNMP)-gated channels (CNGCs) are known to be involved in Ca2+ fluctuations occurring in response to biotic and abiotic stress perception (reviewed in Meena and Vadassery, 2015). These Ca2+ signals are then spread to the surrounding tissue through the vasculature and trigger a multitude of defense responses. However, with regards to host defense specifically against herbivores, little is known about the precise mechanistic details of the transduction pathway involving local and long-distance Ca2+ signals. A new study by Meena et al. (2019) utilising the common cutworm herbivore, Spodoptera litura, describes the role of a member of the Arabidopsis CNGC family, CNGC19, in herbivory-induced local Ca2+ influx and downstream defense responses.

Several CNGCs show altered expression in response to mechanical wounding and/or treatment with S. litura oral secretion. However, CNGC19 is highly and rapidly upregulated in both local and systemic leaves, indicating that this isoform is specifically involved in herbivory perception responses. In the presence of cNMPs, CNGC19 functions as a selectively permeable Ca2+ ion channel that localises exclusively to the PM.

To characterise the role of CNGC19 in the generation and propagation of the Ca2+ signal during wounding, Meena and co-workers utilised the GCaMP3 fluorescent protein-based [Ca2+]cyt sensor. Following wound-induced activation of CNGC19 in wild-type (WT) plants, the Ca2+ signal was seen to spread rapidly from the wound site to the vasculature and then across the leaf itself (Figure). It has previously been hypothesised that this latter phase of Ca2+ signal transmission may occur via the plasmodesmata (Toyota et al., 2018) and is thus slower. Crucially, however, in cngc19 loss-of-function mutants this local Ca2+ signal propagation was significantly impaired.

Concomitant with its role in regulating herbivory-induced Ca2+ fluxes, CNGC19 was additionally found to positively regulate other aspects of downstream induced defense responses to S. litura. Analysis of cngc loss-of-function mutants revealed that they were more susceptible to caterpillar feeding in comparison to WT. These mutants also accumulated significantly lower levels of jasmonic acid (JA) and its biologically active derivative, jasmonoyl-isoleucine (JA-Ile) during herbivore attack, accompanied by the down-regulation of known JA-responsive marker genes. Moreover, expression of CNGC19 was shown to be dependent on the jasmonate receptor, CORONATINE INSENSITIVE 1 thus, CNGC19 appears to function as part of a positive feedback loop.

Since JA biosynthesis is rapidly induced upon wounding and is known to be regulated by Ca2+ cascades (Wasternack and Hause, 2013), the attenuated Ca2+ signal propagation in the cngc19 mutants likely contributes to this observed cngc19 defense phenotype. Surprisingly, the cngc19 mutants also exhibit decreased accumulation of aliphatic glucosinolates—a major group of secondary metabolites active in plant resistance to chewing insects—but increased levels of its precursor, methionine. Expression levels of branched-chain aminotransferase (BCAT) 4, which catalyzes the first step in the aliphatic glucosinolate biosynthetic pathway, were significantly down-regulated in the cngc19 lines, and bcat4 mutants pheno-copied cngc19 mutants in insect feeding assays. Taken together, the Ca2+ CNGC19 channel likely regulates BCAT4 expression and thus the biosynthesis of defense-related secondary metabolites, further implicating CNGC19 as a positive regulator of induced herbivore immune responses.

This study highlights the role of one specific CNGC channel in local Ca2+ signal propagation in response to herbivory. The glutamate receptor-like (GLR) proteins are another well-studied group of ion channels shown to be essential in wound-induced electrical and Ca2+ signalling events (Toyota et al., 2018). It would, therefore, be of interest to investigate any potential cross-talk between GLRs, CNGCs and other groups of ion channels involved in generating these Ca2+ fluxes. Such rapid local and long-distance Ca2+ signals, coupled with ROS and electrical signals, also occur under other biotic and abiotic stress conditions. How these multiple signals are integrated by the plant to generate an appropriate stimulus-specific response remains to be determined.

Wasternack, C. and Hause, B. (2013). Jasmonates: biosynthesis, perception, signal transduction and action in plant stress response, growth and development. An update to the 2007 review in Annals of Botany. Annals of Botany 111: 1021–1058. 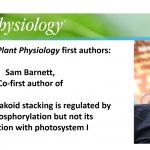