The cell cycle is a tightly coordinated dance with the ultimate goal of dividing one cell into two. Eukaryotic cells tend to divide in the same general pattern, broadly reduced to four phases; cells increase organelle content in the G1 phase, DNA replication occurs in S phase, cells grow in size and protein content during the G2 phase, and ultimately they undergo mitosis and cytokinesis in M phase. Each of these four phases must be regulated and checkpointed to prevent uncontrolled cell growth. In mammals, one means to regulate the cell cycle is via the production of microRNAs (miRNAs), a class of ~21 nt small RNAs that function to post-transcriptionally silence gene expression, with crucial roles spanning development, physiology, and stress responses. In plants, however, the role of small RNAs and the ARGONAUTE (AGO) proteins that load and transport them are largely unknown. 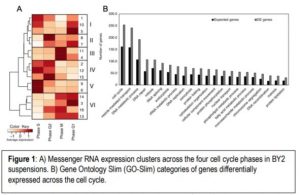 Trolet et al. (2019) explore this question of small RNA-dependent cell cycle regulation using a suite of elegant experiments. They leveraged the tobacco (Nicotiana tabacum) BY2 cell suspension system, a fast-growing cell culture line that can be synchronized for cell cycle studies and monitor the mRNAs, proteins, and small RNAs expressed at each phase (Nagata et al., 1992). Focusing particularly on the AGO1 protein, which selectively binds and transports microRNAs, the authors first generated a Green Fluorescent Protein (GFP) tagged version of AGO1. After synchronizing BY2 cells and monitoring the fluorescent expression level of AGO1, they found that AGO1 levels were relatively consistent across the cell cycle. Knowing that the overall expression level of AGO1 did not change across the cell cycle, the authors surmised that perhaps the localization of AGO1 may be important. AGO1 expression dominated the cytosol in S phase, in nuclear bodies during G2, and was absent from condensed chromosomes during mitosis, showing that AGO1 expression is labile but has specific spatiotemporal patterns during the cell cycle.

With this in mind, the authors then performed a set of measurements of total RNA, small RNA, mRNA, and AGO1-loaded small RNA pulldowns to assess variation across the cell cycle in BY2 suspensions. As expected, highly expressed genes include those involved in histone deposition to coil and uncoil DNA, as well as cytoskeleton and cytokinesis-related genes (Figure 1). Gene expression across all phases was clustered into modules, and compared with the distribution of different small RNA classes that could potentially be regulating their expression. Most classes of small RNAs did not differ across the cell cycle, but miRNAs did, suggesting that post-transcriptional regulation of genes is crucial for the cell cycle to progress. Intriguingly, a class of 19 nt small RNAs derived from transfer ribonucleic acids (tRNAs) were also differentially regulated, which may also serve as post-transcriptional modifiers.

In order to identify if miRNAs are regulating a target mRNA by cleaving the transcript, the authors generated an additional dataset using PARE (Parallel Analysis of RNA Ends) sequencing. They identified 51 differentially expressed miRNAs that regulate 31 target genes across the cell cycle. The gene targets of these cell cycle-specific miRNAs include transcription factors from the AP2/ERF, MYB, SCARECROW, and GRF families, as well as genes involved in disease resistance. Some of these miRNA-target pairs were only expressed in a single cell cycle phase, as well.

Overall, the manuscript reveals to us that the cell cycle is regulated by a complex, layered set of expression and regulation over time and space. The identification of cell cycle phase-specific miRNA-target pairs clearly shows that the proper division of cells requires mRNA regulation by small RNA production, broadening the scope of the role of small RNAs in plant development.

SAGL1-CER3 Function in Cuticular Wax Biosynthesis in Response to Humidity 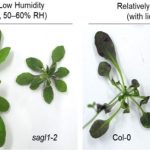 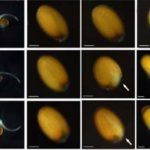