Date palm (Phoenix dactylifera L.) is one of the few fruit tree species capable of surviving in desert environments, and as such, date palms are essential for desert agricultural production. In a new study, Xiao and colleagues (2019) investigated several mechanisms that allow date palms to survive the extreme and highly variable temperatures and drought conditions of the desert.

Germination of many seed plants involves the emergence of distinct root and then shoot structures (cotyledons or leaves). By contrast, date palms undergo a germination mode referred to as remote tubular germination that involves the initial emergence of a root-like structure termed the cotyledonary petiole (CP). Subsequently, the CP elongates and thickens, and at later stages of germination the primary leaf emerges from an opening in the CP. The distal CP tip further elongates to form the main root.

Xiao et al. found that the embryo within the CP tip during the first few weeks post-germination showed high anatomical similarity to the embryo found in pre-germinated seeds, suggesting a state of paused embryonic development during early germination (see Figure). This pause was supported by low rates of cell division, monitored by ethynyl deoxyuridine (EdU) incorporation into DNA, low expression of developmental genes and increase of hormones involved in dormancy. 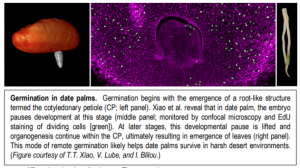 In later stages of the germination process, embryo development continues. Within the CP, the apical pole of the developing seedling shows shoot apical meristem like features, while the external distal tip of the CP develops root-like features such as accumulation of starch granules, and genes marking the differentiated columella layers. The paused embryonic development, followed by protected organogenesis within the CP, suggests that date palms have evolved a developmental program that aims to provide maximum protection to the future seedlings from the desert environment.

Post-germination, date palms develop an intricate root system consisting of vertically growing main and anchor roots, secondary lateral roots, and agravitropic pneumatophores. Main roots showed a complex differential accumulation of suberin and lignin which may prevent water loss and balance ion fluxes. Root transcriptomic data revealed high expression aquaporins, facilitators of water uptake, as well as genes involved in bacterial responses in roots, the latter of which reflects a role for root bacterial communities in adaptation to stress conditions. Finally, pneumatophores were shown to have differential root thickness along the proximal-distal axis, arising from both difference in cell sizes and numbers. Although the function of pneumatophores remains unclear, the authors propose a role in increasing water uptake. 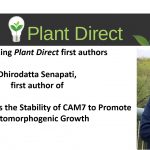