Background: For germnating seedlings to survive and become a mature plant, they must push through the overlaid soil to reach the light. During this process, mechanical damage is a problem for successful emergence. Most dicots form a hook-like structure (apical hook) on the apex of the young stem to overcome this challenge, promoting successful emergence. Many phytohormones regulate apical hook development, including salicylic acid (SA), whose role in this process is not well described despite being important in early seedling development. Meanwhile, the interplay of SA and ethylene (ET) in defense responses has been widely studied, but their relationship in early seedling development remains unclear.

Questions: Does SA participate in apical hook development of etiolated seedlings? What is the possible mechanism of its action?  Furthermore, what is the physiological effect of SA and ET interplay?

Findings: We found that exogenous SA antagonized the effect of ET and reduced the apical hook angle of etiolated seedlings in Arabidopsis. This action of SA was dependent on ETHYLENE INSENSITIVE3 (EIN3) and EIN3-LIKE1 (EIL1), the core transcription factors of the ET pathway. SA-activated NONEXPRESSER OF PR GENES1 (NPR1) directly interacted with EIN3 and disrupted the binding of EIN3 to its target promoters, including the promoter of HOOKLESS1 (HLS1), a gene essential for apical hook development, thus reducing the hook angle. In addition, we discovered that NPR1 and EIN3/EIL1 coordinately regulated subsets of genes that participate in plant growth and stress responses, suggesting that interaction between NPR1 and EIN3/EIL1 is an important node for integrating SA and ET signaling in multiple physiological processes.

Next steps: Although we provide an NPR1-dependent mechanism of SA in regulation of apical hook development, an NPR1-independent pathway exists and is worthy of further study. Our findings have identified new regulatory mechanisms of hook development, and can be exploited by crop scientists to modify seedling morphology and promote rates of seedling emergence. 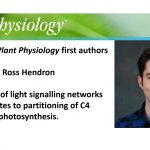 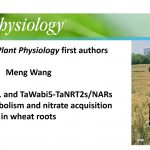