Simple plant cell morphologies, such as cylindrical shoot cells, are determined by the extensibility pattern of the primary cell wall, which is thought to 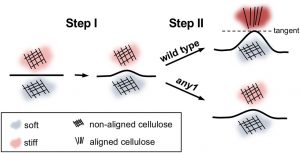 be largely dominated by cellulose microfibrils, but the mechanism leading to more complex shapes, such as the brick-shaped or jigsaw-like patterns in the epidermal pavement cells of many eudicot leaves, is much less well understood. Details about the manner in which cell wall polymers at the periclinal wall regulate the morphogenetic process in epidermal pavement cells and mechanistic information about the initial steps leading to the characteristic undulations in the cell borders are elusive. Altartouri et al. (10.1104/pp.19.00303) have used genetics and imaging methods to study the impact of the spatio-temporal dynamics of cellulose and homogalacturonan pectin distribution during lobe formation in the epidermal pavement cells of Arabidopsis cotyledons. Their data suggest that lobe initiation involves a modulation of cell wall stiffness through local enrichment in demethylated pectin, whereas subsequent increase in lobe amplitude is mediated by the stress-induced deposition of aligned cellulose microfibrils. The results of this study provide evidence for the initiation mechanism of cell shaping and the roles of cellulose microfibrils and demethyl-esterified pectin during the developmental process of the undulations of pavement cells. 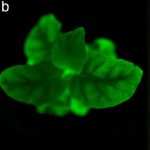