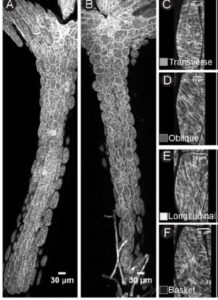 The plant cortical microtubule array is a dynamic self-organizing structure that controls the mechanics of plant growth by guiding the deposition of wall materials. While much is known about the properties of individual microtubules, the mechanism by which plant cells organize the cortical array into functional patterns for the deposition of wall materials is poorly understood. Microtubule polymerization dynamics are influenced by microtubule-associated proteins (MAPs) and cellular cues. The CYTOPLASMIC LINKER ASSOCIATED PROTEIN (CLASP) is a well-studied MAP found across plant, fungal, and animal systems, although most studies have focused on its role in mitosis. The model plant Arabidopsis has a single CLASP gene that is expressed throughout the plant.  Thoms et al. (10.1104/pp.18.00961) report that the loss of the Arabidopsis CLASP (AtCLASP) results in cellular growth anisotropy defects in hypocotyl cells. They examined the microtubule array patterning in atclasp-1 null mutants and discovered no major defect in the array patterns per se but rather a significant defect in the timing of transitions between array patterns. Detailed analysis and computational modeling of the microtubule dynamics in two atclasp-1 fluorescent-tubulin marker lines indicate that AtCLASP plays a critical role in cellular morphogenesis through its actions on newly formed microtubules that are involved in facilitating array transitions.

The H+/K+ Antiporters of Endosomal Membranes
Scroll to top