The main problem to elucidate the genetic basis in regards to a plant local adaptation is the geographic and climatic biased scope of the tests. Here, Lowry et al. overcame this by evaluating the contributions of individual genetic loci to the adaptation of outcrossing switchgrass (Panicum virgatum L.) across 10 geographic regions at the central United States. Highly divergent lowland and upland ecotypes were used to develop a four-way outbred mapping population, where the crosses design was key to quantify the differences in effects of the alleles. The authors mapped multiple significant Quantitative Trait Loci (QTL) for five traits: biomass, flowering and green-up time, plant height and tiller number. Most of the QTL showed an important genotype-by-environment (G×E) effect. However, the results suggested that the same loci do not consistently contribute to the divergence between the ecotypes. Furthermore, a two-way comparison of the biomass QTL additive effect looking for trade-offs showed they were weak, rare or undetectable, which implies a gene flow restriction between ecotypes, allowing to breed lines that perform well across large areas. (Summary by Ana Valladares) PNAS 10.1073/pnas.1821543116 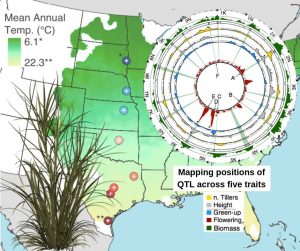 Paleogenomic insights into the origins of French grapevine diversity (Nature... 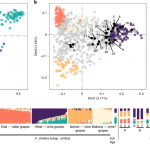 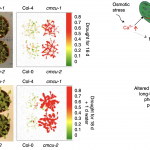