The grapevine has it that some living varieties of Vitis vinifera were grown by the Romans, and maintained for over two millennia. Ramos-Madrigal et al. used target-enriched genome-wide sequencing for 28 grape seeds recovered from archeological sites dating to the Iron Age, Roman period and Middle Ages. The meta-analysis revealed that these archeological grapes were more closely related to modern varieties from West and Central Europe than to wild grape relatives. By calculating the kinship coefficient between the ancient samples, the close relationships were found for archeological samples found in sites 600 km apart, suggesting that the grape cuttings were transported across long distances in ancient times. Additionally, some of the ancient varieties were also found to be similar to modern varieties, suggesting that varieties related to “Savagnin Blanc” were grown in France since approximately two millennia ago (Summarized by Magdalena Julkowska) Nature Plants 10.1038/s41477-019-0437-5 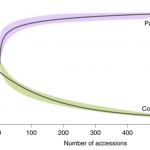 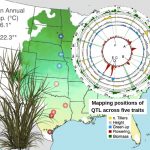