Identifying natural genetic variation, understanding how it influences traits, and utilizing it for crop improvement is a major objective in plant science. Miller et al. (2019) have identified genetic variation in the promoter region of BnaUPL3.C03 from a panel of Brassica napus accessions that can influence seed size, lipid content and final crop yield. They establish a mechanism in which reduced expression of BnaUPL3.C03, encoding a HECT E3 ubiquitin ligase, leads to elevated levels of LEAFY COTYLEDON 2 (LEC2), a transcription factor controlling seed maturation. This prolongs seed maturation processes, leading to increased seed size and lipid content. They also show that variation in BnaUPL3.C03 expression could be exploited to increase yields of major oilseed crops.

Using a panel of 94 B. napus oilseed rape accessions with high genetic diversity, Miller et al. identified a significant association region relating to the trait of seed weight per pod (SWPP). A subset of the 10 B. napus accessions that had maximal variation in SWPP were grown under field conditions. High SWPP accessions had significant increases in plot yields, indicating that SWPP is an important measure of seed yield under field conditions.

The genetic region related to SWPP corresponded to an ortholog of the Arabidopsis UPL3 (Downes et al., 2003). While there are two UPL3 homologs in B. napus, BnaUPL3.C03 was identified to vary significantly between accessions. Specifically, analysis of seedlings from six lines that conferred high or low SWPP showed that BnaUPL3.C03 expression levels negatively correlated with SWPP. That is, high SWPP lines had low BnaUPL3.C03 expression and vice versa.

Miller et al. found that Arabidopsis loss-of-function upl3 mutants (upl3-4 and upl3-5) had seeds approximately 10% larger than wild type and had a 12% increase in seed lipid content. In comparison, over-expression of AtUPL3 using the 35S promoter (35S:3HA-UPL3 transgenic) reduced seed size and lipid content. Interestingly, mutants in Brassica rapa (the A genome donor to B. napus) of the UPL3 gene had larger seeds than the respective segregating wild type, thus indicating a potential role for UPL3 in regulating seed size in both Arabidopsis and Brassica species.

Multiple sequence differences were identified in the BnaUPL3.C03 promoter and 5ʹUTR sequences of a high- (Coriander) and low-expressing (Dimension) accessions. To determine how these influence the variation in seed size, transgenic Arabidopsis lines of loss-of-function upl3-4 expressing AtUPL3 with either promoter fused to the N-terminus were constructed. The high-expressing Coriander promoter transgenic lines showed near wild-type seed sizes, while reduced levels of complementation was observed for those under the low-expressing Dimension promoter.

Given there are several Arabidopsis genes that influence both seed lipid content and seed size, the expression of these were analysed in upl3-4 to determine how UPL3 could potentially function. UPL3 was identified to mediate the proteasomal degradation of LEC2. LEC2 is known to activate the expression of seed maturation and seed lipid accumulation genes (Barthole et al., 2014, Baud et al, 2016). upl3-4 mutants had increased endogenous LEC2 protein while 35S:3HA-UPL3 transgenic lines had reduced LEC2 levels.

When assessing seven current elite B. napus lines, the authors found that there was substantial variation in BnaUPL3.C03 expression, although relatively high levels in comparison to the study’s low expression line. Considering the findings of how UPL3 levels can be manipulated to alter seed yield, this indicates that there could be a significant potential for further yield increases via reduction of BnaUPL3.C03 expression. 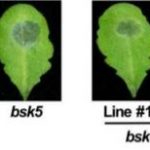 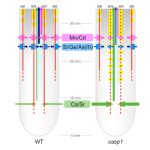