RLKs transduce signaling through their various interacting partners and downstream components and function in plant development and responses to hormonal and environmental cues. The signal transduction mechanisms remain a mystery, as most RLK substrates are not fully defined yet. Brassinosteroid signaling kinases (BSKs) are in vivo targets of the brassinosteroid receptor brassinosteroid insensitive1 (BRI1) and are partially redundant positive regulators of brassinosteroid signaling and brassinosteroid-dependent growth (Tang et al., 2008; Sreersmulu et al., 2013). The relevance of BSKs to plant immunity is not defined and might be diverse.

In this issue of Plant Physiology, Majhi et al. (2019) present evidence supporting the role of BSK5 in PTI. The authors show that BSK5 interacts with multiple RLKs and PRRs such as PEPR1 and EFR in a direct and specific fashion. PEPR1 and EFR phosphorylate BSK5, but not BSK1 and BSK6, thus defining BSK5 as component of signaling downstream of these PRRs. Genetic and phenotypic analyses revealed that bsk5 mutation causes increased susceptibility to both biotrophic bacteria (Pseudomonas syringae) and nectrophic fungi (Botrytis cinerea). The bsk5 mutants are also compromised in resistance to pathogens otherwise induced by PAMPs and fail to accumulate callose, reactive oxygen species and PATHOGENESIS-RELATED 1 transcripts. Majhi et al. further demonstrate that phosphorylation, kinase activity, and plasma membrane localization are essential for BSK5 immune function.

Like BSK5, BSK1 and BSK3 have been detected in protein complexes with PRRs (Shi et al., 2013; Zhang et al., 2017; Wang et al., 2017), which raises the question of how they modulate PTI differently. This difference in activity might rely on factors that determine the specificity of the association between BSKs and PRRs. Proteins that interact with BSK5 are in part different from those that interact with other BSKs; however, botrytis-induced kinase1 (BIK1) seems to act in the same signaling pathway as BSK5 and equally affects PTI-mediated responses (Liu et al., 2013). A second question relates to the specificity of BSK5 function in immunity and whether this is a ‘side’ reaction relative to its role in brassinosteroid signaling. The answer may lie in the biochemical properties of BSK5, as distinct mechanisms of activation might result in diverse physiological functions. It remains to be established how BSK5 associates with substrates to fine-tune other stress responses, and if this is a conserved mechanism that might explain bsk5 responses to salt stress and abscisic acid (Li et al., 2012). It is worth noting that the phosphorylation site of BSK5 is conserved in BSK1 and corresponds to the major site phosphorylated by the brassinosteroid receptor BRI1 (Tang et al., 2008). However, unlike in BSK5, this site is not required for BSK1 function in disease resistance (Wang et al., 2017).

Future investigation should determine how BSK5 interferes with immune signal transduction to shut down PTI responses such as the oxidative burst. In theory, this could be achieved either by direct phosphorylation of RESPIRATORY BURST HOMOLOGs or by regulating the activity of other kinases that directly influence reactive oxygen species production. Identification of BSK5 targets will shed the light on new signaling components and enhance our understanding of their activation mechanisms within and beyond Brassicaceae.

The genome history of camelina emerges from the shadows 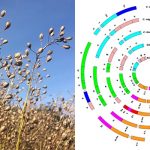