In chloroplasts, the pigments of the light harvesting complex channel light energy to photosystem II (PSII) and PSI. The light energy is used to separate an electron from PSII, starting its cascade through the electron transport chain. Accompanying the electron transfer, a proton gradient across the thylakoid membrane is established, with a higher concentration of protons and lower pH in the thylakoid lumen. The proton gradient (ΔpH) functions as an intermediate storage the harvested light energy and drives ATP synthesis as protons pass across the membrane through the chloroplast cpATP-synthase. Yet, the accumulation of positively charged protons on one side of the membrane also generates a gradient in charge or membrane potential (ΔΨ). Like the ΔpH, the ΔΨ serves as a storage of the harvested light energy; it could be roughly imagined as an analogue to a battery, with the negative pole on the stroma side of the membrane and the positive pole in the lumen. Consequently, protons are attracted to move from the lumen to the stroma.  ΔpH and ΔΨ combine to establish the proton motive force (also referred to as the proton electrochemical gradient) that drives the flux of protons through the cpATPase (Figure 1) (Allen, 2002; Armbruster et al., 2017).

The chemical gradient or ΔpH is inseparably connected to protons, but ΔΨ is a difference in charge, so any ion can replace the proton. Therefore, replacing protons in the lumen with another cation (or simultaneously removing protons and a negative charge) alters the relative contributions of ΔpH and ΔΨ to the proton motive force. This currency exchange of charge substitution is particularly important under non-optimal conditions, such as low light, when energy available for biomass production is low, and light needs to be harvested efficiently. The efficiency of the energy transfer from the harvested light into the electron transport chain depends on the lumen pH; at a low pH (i.e. a higher proton concentration) fewer electron acceptors are available. In these circumstances more of the harvested light energy is dissipated as heat during non-photochemical quenching (NPQ), thereby decreasing photosynthetic efficiency. 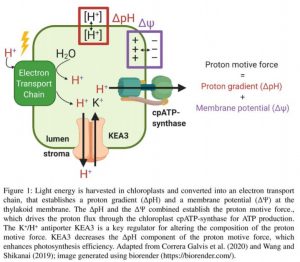 In this issue of Plant Physiology Correa Galvis et al. (2020) demonstrate that the Arabidopsis thaliana (Arabidopsis) potassium exchange antiporter (KEA3), a K+/H+ antiporter, is a key component responsible for altering the composition of the proton motive force by decreasing the relative contribution of the ΔpH while increasing the contribution of  the ΔΨ (Figure 1). Correa Galvis et al. (2020) use Arabidopsis mutant plants with limited ATP-synthase capacity as a tool; these mutants store a higher proportion of the proton motive force as ΔΨ (Davis et al., 2016). Combining these mutants with kea3 knockouts, they demonstrate that KEA3 function improves photosynthetic capacity in plants that are dependent on storing e a larger proportion of the proton motive force as ΔΨ, a situation that is for example found in wild-type plants under low light. They further show that the KEA3-dependent conversion of ΔpH to ΔΨ is directly connected to the stability of several components of the electron transport chain, further contributing to enhanced photosynthetic efficiency.

The results presented by Correa Galvis et al. (2020), combined with previous results from Wang and Shikanai (2019), elegantly demonstrate the important contribution of the K+/H+ antiporter KEA3. KEA3 is an excellent example of an ion transporter that is important for processes other than nutrient distribution in the plant. KEA3 activity is not connected to maintaining potassium nutrition; the movement of the proton is the important aspect of the transporter activity, and potassium acts as a general positive charge that is moved. Moreover coupling proton and potassium transport contributes to ATP production rather than costing ATP. KEA3 could therefore be seen as a H+/K+ transporter as opposed to a K+/H+ transporter.

The role of KEA3 in chloroplasts highlights the interconnection of ion fluxes; other transport proteins might have equally complex and crucial roles in cells. It might be time to move away from viewing ion transporters solely as nutrient or osmolyte carriers, and towards a more integrated approach on investigating ion and charge movement. The complex interconnectivity of all ion fluxes across all cellular membranes makes them challenging to investigate. In recent years, mathematical modelling of ion fluxes and the development of genetically-encoded fluorescent ion sensors have emerged as essential tools for enhancing our understanding of these networks; in particular they helped to increase our knowledge on the regulation of cytosolic pH signalling events (Chen et al., 2012; Jezek and Blatt, 2017; Behera et al., 2018). Many more roles of ion transport proteins and ion flux networks are likely be waiting to be discovered.

Jezek M, Blatt MR (2017) The Membrane Transport System of the Guard Cell and Its Integration for Stomatal Dynamics. Plant Physiology 174: 487-519 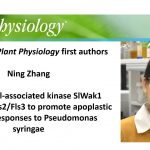 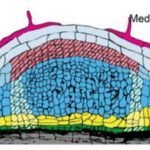 A Nod to Their Ancestors: Mutation of MtNOOT1 Highlights Conserved Nodule D...
Scroll to top