Update: Toward a data infrastructure for the Plant Cell Atlas 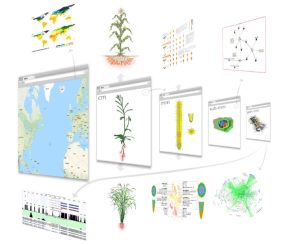 The ability to analyze the information contained within a single cell, for example through single-cell RNA sequening (scRNA-seq) presents exciting possibilities to biologists. Building on this and similar technologies, the Plant Cell Atlas (PCA) (www.plantcellatlas.org/) has the goal of creating an information resource about the state (DNA, RNA, proteins, molecules) of various plant cells in various conditions. Obviously, this project requires a lot of data, but if the data isn’t collected and curated appropriately, the information gleaned will be limited. Here, Fahlgren et al. describe their vision for the data infrastructure that will support this ambitious project. The authors describe the project as requiring tiered sets of databases: infrastructure, consolidation, and investigator. The PCA infrastructure design can be adapted from the Human Cell Atlas Data Coordination Platform or the EBI’s Single Cell Expression Atlas systems, and several consolidation-based tiers such as The Arabidopsis Information Portal (TAIR) and the Bio-Analytic Resource for Plant Biology (BAR) provide starting points for the development of the PCA project. Data sharing, annotation, curation, and integration require data and metadata standards and vocabularies and consistent analysis pipelines that will need to be adhered to by investigators. Finally, the authors discuss options to address the interlocking needs for ongoing curation and funding. The result of these efforts should enable researchers to pose questions such as how equivalent cells in different species respond to the same environmental stimulus.  (Summary by Mary Williams @PlantTeaching) Plant Physiol. 10.1093/plphys/kiac468

Review. Defining biodiverse reforestation: Why it matters for climate change mitigation and biodiversity 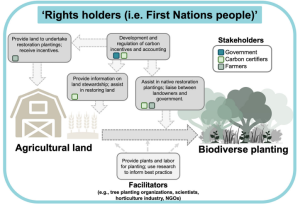 Biodiversity contributes to thriving, healthy ecosystems that are essential for climate tolerance, improving water quality and habitat structure. As time goes on, there is increasing pressure to address climate change concerns worldwide, with one possible climate change mitigation approach being reforestation for carbon sequestration. Andres et al. address issues with simple reforestation, asking what characterizes biodiversity for such ecosystems and who holds the power in creating such a definition. Through examining publicly available documents and website content of associated organizations, an image of biodiversity through the eyes of stakeholders such as governments, farmers, carbon certifiers and rights holders/First Nations communities is presented in an Australian context. Groups varied in their priorities for particular types of biodiversity, with some prioritising benefits such as genetic diversity, improving climate tolerance, crop protection or soil structure. As an overarching approach to reforestation, incorporating a minimum of 20-30 native species per hectare or at least 80% of the species from the reference site is recommended. Andres et al. encourage setting quantitative targets to provide support for long term monitoring of reforested areas in terms of biodiversity. This paper provides an interesting investigation into the nuance of meaning around biodiversity, providing recommendations for future work in biodiverse reforestation.  (Summary by Orla Sherwood @orlasherwood) Plants People Planet.10.1002/ppp3.10329 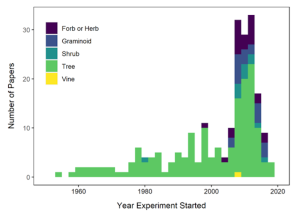 “The local is best” is a mantra in ecological restoration: if you want your project to succeed, you should use local plant material since it’s already adapted to local conditions. However, ecosystems now need to withstand both current and future conditions brought by climate change. As a result, restoration practitioners need new seed-sourcing guidelines to address these challenges. In this review, Vitt, Finch and colleagues provide a detailed overview of the studies about the performance of different provenances under a shared environment; a kind of experimental design that should aid seed source selection. Most studies have been focused on tree and forest species from North America and Europe, although studies with herbaceous species have notably increased during the last decade. Most studies used geographic or climatic distance to categorize different provenances, but around half of the studies did not consider potential genetic effects. The authors emphasize the need to address these biological and geographical biases. Additionally, they offer helpful recommendations for improving seed sourcing in the context of climate change, such as adopting stricter procedures for reporting the seed provenance and using species distribution models to identify new sources. This review thus offers an exciting starting point for better seed-sourcing practices and research. (Summary by Carlos Andrés Ordóñez Parra @caordonezparra). Front. Conserv. Sci. 10.3389/fcosc.2022.938110

Tansley Insight: Analyzing the impact of autotrophic and heterotrophic metabolism on the nutrient regulation of TOR 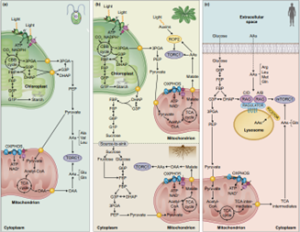 A protein kinase, target of rapamycin (TOR), controls cell growth and metabolism in all eukaryotes. The role of TOR in regulating synthesis and breakdown of organic compounds in response to nutrients, hormones and cellular energy to promote growth and development is universal in autotrophs and heterotrophs. TORC1 is one of TOR complexes conserved for several functional roles. Although, the roles of TORC1 are similar in all eukaryotes, its takes cues from each organism based on their mode of nutrition. Mallen-Ponce et al. reviewed the roles of amino acids and carbon compounds in regulating TORC1 in different eukaryotes. Amino acids activate the functional role of TORC1 in microalgae and yeast. But in mammals, additional input from growth factors is needed to activate mTORC1. In plants, nitrates and ammonium are the primary nitrogen signals to activate TORC1. Carbon in form of fixed CO2 regulates TORC1 activity in microalgae, whereas in mammals the glucose form is used and in plant roots, glucose converted to sucrose activates TORC1. Light input is required for complete activation of TORC1 in shoot apexes, with auxins being the connecting signal. Further studies on how TORC1 perceives amino acids and carbon availability in plants and algae are needed. (Summary by Idowu Obisesan @IdowuAobisesan) New Phytol. 10.1111/nph.18450 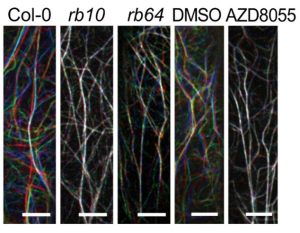 TOR (Target of Rapamycin) complex is an information hub that integrates nutrition and energy signals and serves as a master regulator for multiple downstream cellular processes. The actin cytoskeleton in plant cells is highly dynamic, with rapid changes of its organization and constant turnover between its monomeric and filamentous forms, requiring a large energy supply. While both TOR complex and actin cytoskeleton dynamics relate to energy level, little is known about the connection between them. In this recent work from Dai et al., the connection of TOR complex 1 (TORC1) and actin cytoskeleton dynamics in Arabidopsis has been established. Using spinning-disc confocal microscopy, the authors quantified actin filament dynamics under impaired TORC1 conditions and ATP-deficient conditions. Impairment of TORC1 by genetic mutations and TOR inhibitor treatments led to decreased actin cytoskeleton dynamics and reduced sensitivity to actin inhibitors, but the organization of the actin cytoskeleton was not altered. The authors showed that inhibition of TORC1 functions led to reduced ATP levels, and actin filaments displayed reduced dynamics in ATP-deficient conditions. Further, exogenous feeding of adenine partially rescues the actin filament dynamics upon TORC1 function impairment. Using fluorescence marker-tagged functional complementation lines, the authors demonstrated that an important component of the TOR complex, RAPTOR1B, is localized to the cytoplasm and mitochondria surface, supporting an essential role of TORC1 in controlling physiological ATP production in plant cells. (Summary by Xiaohui Li @Xiao_hui_Li) PNAS 10.1073/pnas.2122969119 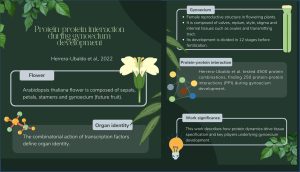 Circadian regulation of the transcriptome in a complex polyploid crop

Circadian regulation fine-tunes patterns of gene expression in plants in changing environments and has been selected for during crop domestication. Many studies have been done on circadian gene expression in Arabidopsis, but far less is known about this regulation in hexaploid bread wheat, especially on how it is balanced across its three subgenomes. Here, Rees et al. present a 3-day circadian RNA-sequencing time course of aerial tissue from bread wheat (cv. Cadenza) seedlings, providing a valuable resource to explore these questions. First, they performed global analysis on the gene expression patterns and compared this to published data on Arabidopsis. Although previous work reported 72.5% balanced expression of wheat triads at a single time point, here only 11.1% were circadian balanced, which is likely due to the many criteria of circadian balance: phase, period, and rhythmicity. Overall, there were three times as many imbalanced as balanced triads in wheat, and a lower proportion of rhythmically expressed genes compared to Arabidopsis. Also, the mean period length for wheat was approx. 3 hours longer than for Arabidopsis, but there were no distinct differences between the three wheat subgenomes. Secondly, the authors compared the wheat and Arabidopsis transcriptomes for specific sets of genes. They found that the core circadian gene expression was conserved, as well as most of the circadian expression of photosynthesis, photoreceptor, and light signalling genes. However, the circadian control of primary metabolism genes was more variable, with several genes expressed rhythmically in Arabidopsis but not in wheat, or with different peak phases or relative amplitudes. (Summary by Jiawen Chen @Jiaaawen) PLoS Biol. 10.1371/journal.pbio.3001802 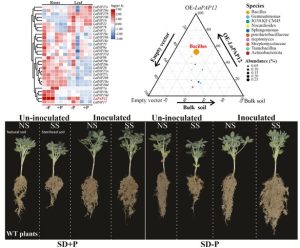 Phosphorus (P, Pi in the form of inorganic orthophosphate) is crucial for plant homeostasis because it is a plant growth-limiting factor. White lupin is an excellent crop model to study Pi changes due to the development of cluster roots (CR). CR are composed of rootlets that allow a more efficient Pi mobilization and uptake due to the increased presence of acid phosphatases (APases). The rhizosheath, the soil area adhering to the roots, is where APases are released, where most associations between roots and the microbial community occur, and is critical for tolerance to abiotic stresses such as drought and P scarcity. In this work, Aslam et al. identified the induction of a gene encoding Purple Acid Phosphatase 12 (LaPAP12), under P deficiency in white lupin.  In knock-down or overexpression lines of white lupin or rice, rhizosheath formation was correlated with LaPAP12 expression level, and elevated expression was also correlated with increased abundance of Bacillus bacteria in the rhizosheath-associated microbiome.  One of these, B. megaterium, is a phosphate-mobilizing, auxin-producing bacterium that promotes P-acquisition in rice and lupin, particularly under dry-soil and low-P conditions. In conclusion, the authors determined the existence of a bacterial community in white lupin rhizosheath associated with expression of LaPAP12 gene and Pi acquisition. This work improves the understanding of how bacterial communities and APase secretion are involved in P acquisition. (Summary by Eva Maria Gomez Alvarez, @eva_ga96). Plant Physiology. 10.1093/plphys/kiac418 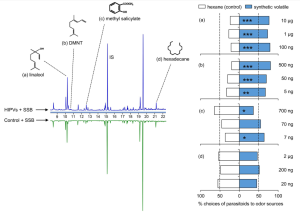 Herbivore attack can trigger release of volatile organic compounds (VOCs) in numerous plant species. These airborne compounds from an infected plant act as messengers in plant-plant interactions causing adaptation to the stress in adjacent plants. Globally, rice is a staple food for millions of people, rendering pest infestation a large threat to rice growers. Yao et al. have shown that release of VOCs from rice plants infected with striped stem borer (SSB) caterpillars can induce both direct and indirect resistance to these pests in uninfected rice plants. Direct resistance was classified by increased jasmonic acid associated gene expression and increased defense priming in plants exposed to the SSB-induced VOCs and then to SSB caterpillars. While priming effects were observed for most genes by exposure to the caterpillar-induced VOCs, expression of defense related genes LOX8, DOX2 and CPI8 were upregulated before exposure to insects, suggesting defense induction prior to infection. Transmission of caterpillar induced VOCs including linalool, MeSA and DMNT increased attraction of parasitic wasps, a natural predator for SSB caterpillars, leading to indirect resistance. This research demonstrates the potential for exploiting airborne VOCs in priming natural defense responses in rice, a densely planted crop which therefore enhances possible plant-plant communication for this species. (Summary by Orla Sherwood, @orlasherwood) New Phytol. 10.1111/nph.18548 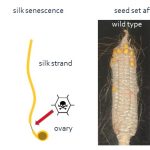 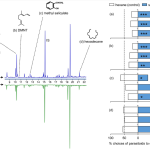