Background: Flowers are receptive to pollination during a limited window of time. This fertile period varies from mere hours in some species, like cacti, to weeks in others like some orchids. At the end of this period, non-pollinated flowers will senesce and die, thus ending the potential for flowers to produce seeds and fruits. Our research focuses on the regulation and functions of programmed cell death (PCD) in the context of plant development. PCD is a genetically encoded, actively controlled form of induced cell death that is indispensable for plant growth and reproduction, and might be involved in flower senescence.

Question: We set out to explore mechanisms underlying flower senescence in the important crop plant maize. Senescence in maize flowers had previously been described to involve tissue collapse at the base of the maize stigma (called silk strand), prompting us to ask if PCD might contribute to this process.

Findings: We analyzed changes in gene expression in senescent silk strands and discovered several induced transcription factor (TF) genes in this tissue. As TFs control the activity of other genes, TFs are prime candidates to understand the regulation of silk senescence.  From several TFs, we identified a candidate we named KIL1 as a key regulator of silk senescence: KIL1 is a potent PCD activator, and loss of KIL1 function extended the fertile window in maize flowers. Interestingly, KIL1-related TFs also control senescence in the model plant Arabidopsis, suggesting that the control of flower senescence by PCD is evolutionarily conserved.

Next steps: The discovery of KIL1 is a first step toward understanding flower senescence in maize. Further exploring KIL1 functions may allow us to modulate maize fertility. Especially under short-term stress situations that are known to reduce maize seed set, an extended fertile period would contribute to stabilizing seed yield in new maize varieties.

Seed germination: It’s about restricting ABA biosynthesis at the chromati... 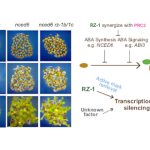 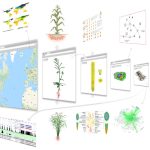