Focus Issue on Architecture and Plasticity 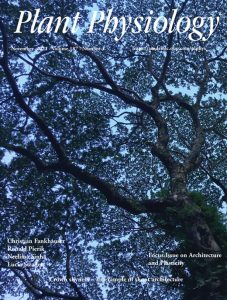 The November issue of Plant Physiology is a Focus Issue on Architecture and Plasticity. One of the most intriguing aspects of plant growth and development is the environmental responsiveness (also known as “plasticity”) of plant architecture (growth form). Depending on environmental conditions, roots can grow deeper, branch more, or be hairier; leaves can be thicker or thinner, and point sideways, downwards, or upwards; shoots may or may not elongate and form branches. Understanding these outcomes requires knowledge of how conditions are perceived, transduced, and how cells and tissues respond to this information. Not only are they inherently interesting, but these insights are crucial to engineer crops of the future, that can withstand climate instability, and grow “greener” with less need for environmentally costly supplements. Check out the editorial overview 10.1093/plphys/kiab402 and full issue. (Summary by Mary Williams @PlantTeaching) 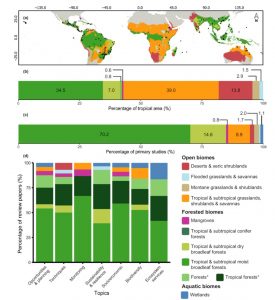 You’ve heard of “Plant Awareness Disparity” (10.1002/ppp3.10153), a term gaining popularity to highlight the fact that plants are sometimes overlooked as living organisms (replacing the abelist term “Plant Blindess”). You’ve also recently read that plants with bigger, more conspicuous flowers get more research attention (10.1038/s41477-021-00912-2).  Silviera et al. extend these observations and demonstrate that some biomes are overlooked by researchers and policymakers, in what they describe as “Biome Awareness Disparity”. The authors noted that social media posts and engagement vary with the type of biome that is being discussed, and that the scientific literature also over-reports on forested biomes as compared to open, grassland biomes. A consequence of this over-emphasis on trees and forests is an association between restoration and tree planting. Several high-profile tree-planting programs vie for donations, but at the same time few have demonstrated success. Furthermore, grasslands aren’t improved by tree planting. In fact, they are degraded by this practice. Clearly, biome awareness disparity is BAD for tropical ecosystem conservation! (Summary by Mary Williams @PlantTeaching) J. Appl. Ecol. 10.1111/1365-2664.14060. 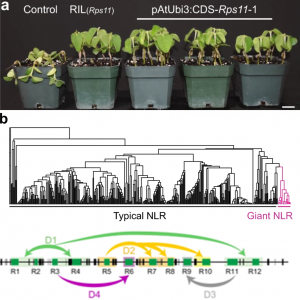 Phytophthora sojae is an oomycete pathogen that causes huge yield losses in soybean. Genetic studies have identified several loci that confer resistance (Resistance-to-P. sojae loci, or Rps). Here, Wang et al. have cloned Rps11 and found that it encodes a very large NLR (nucleotide-binding site leucine-rich repeat) protein. Their initial mapping identified a cluster of NLR-encoding genes responsible for broad-spectrum resistance (they found resistance to 80% of the P. sojae isolates they tested), and fine-structure mapping followed by generation of Rps11 transgenic lines demonstrated that Rps11 alone confers this resistance. From start- to stop-codon, the Rps11 gene is 14 kb, but its transcript initiation site lies 13 kb upstream of the ATG and contains several introns, making this a very large gene. The authors also investigated the evolutionary history of this large gene through phylogenetic analysis and found that it originates from several unequal recombination events. Identifying which features of Rps11 are responsible for the broad-spectrum resistance awaits further studies. (Summary by Mary Williams @PlantTeaching)  Nature Comms. 10.1038/s41467-021-26554-8 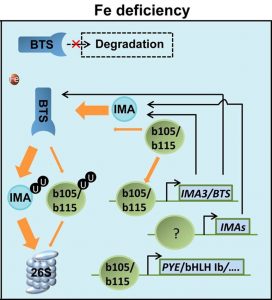 Plants need to maintain an optimum level of iron (Fe) for normal growth and development. Many Fe-responsive molecular players have been identified in Arabidopsis, including the IRON MAN (IMA) peptides. These peptides are induced by Fe deficiency, but their role in maintaining Fe homeostasis remains poorly understood. Li et al. provide a mechanistic insight into the role of IMA in the Fe-uptake pathway. They found that IMAs harbor a BRUTUS (BTS) interaction domain (BID) in their C-terminus which enables them to interact with BTS, a negative regulator of Fe uptake. Further, the bHLH transcription factors 105 and 115 which positively regulate Fe uptake also contain a BID. Under Fe-sufficient conditions, the bHLH105/115 proteins undergo ubiquitination and degradation by the action of BTS. However, under Fe deficiency when IMAs are expressed, competitive binding of IMAs with BTS leads to BTS sequestration, protecting bHLH105/115 from degradation and allowing them to positively regulate the Fe-uptake pathway. The findings of this study show that sequestration of BTS by IMA is essential for activating Fe deficiency response in Arabidopsis. (Summary by Chandan Kumar Gautam @chandan_gautam) PNAS 10.1073/pnas.2109063118 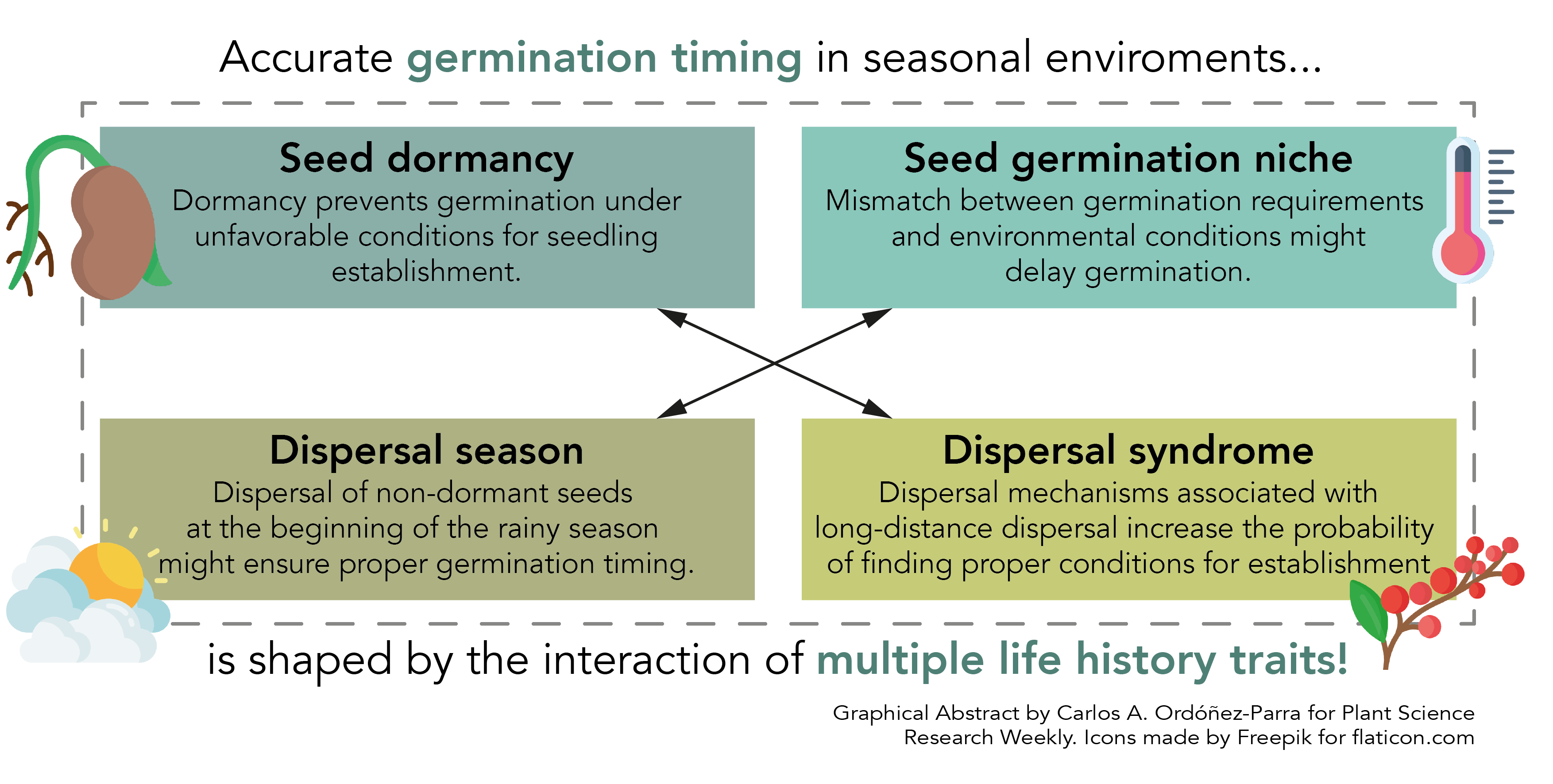 Ensuring that seeds germinate in the most suitable conditions for seedling establishment is critical for plant fitness, especially in environments where water is not readily available all year. Seed dormancy is considered to be the primary mechanism to achieve this. Still, many other different life-history traits such as germination requirements, dispersal season and dispersal syndrome might ensure proper germination timing in the absence of seed dormancy. Here, Escobar and colleagues investigate the functional interactions between these traits in more than 80 species from the Brazilian Cerrado. Seed dormancy was significantly related to dispersal syndrome, with wind-dispersed seeds having higher probabilities of being nondormant. Still, these traits exhibited a strong phylogenetic signal, suggesting that they jointly evolved. In contrast, dispersal season and germination niche did not show such signal, implying they are more evolutionary flexible. Moreover, these two traits were significantly correlated, with species that disperse during the rainy season having germination requirements aligned with the abiotic conditions of that time. Therefore, this research illustrates how these traits are combined to produce functionally equivalent strategies to ensure proper germination timing in seasonal ecosystems. (Summary by Carlos A. Ordóñez-Parra @caordonezparra) Oikos 10.1111/oik.08522

Maternal care in plants is expressed through the investment in means for seed dispersal and germination and resource allocation to seeds. While the latter is limited by seed mass, this trait only provides a partial view of the functional importance of maternal care in plants. Notably, seed macronutrients –namely carbon, nitrogen and phosphorus– differ significantly between species, but little is known about the plant and ecological factors that shape seed nutrient content. In this paper, Mašková and Herben measured the seed nutrient content of 510 herbaceous species from Central Europe and assessed its relationship with species habitat, seed mass and plant lifespan. All nutrients exhibited a strong phylogenetic signal, meaning that closely-related species had similar seed nutrient content. Still, nonstructural carbon and nitrogen content varied significantly with species habitat, with species from nutrient-poor and highly-disturbed environments having low values for each element. This trend suggests that plants preferentially allocate nutrients that are expected to be limiting the germination environment. Additionally, small-seeded species use proportionally more of their biomass for nutrient storage than heavy-seeded ones. As a result, this research provides fascinating insights into the different factors that shape seed nutrient content and its potential ecological implications.(Summary by Carlos A. Ordóñez-Parra @caordonezparra) Oikos 10.1111/oik.08186 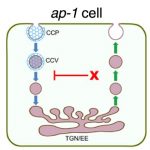 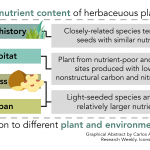