The rate of most biological processes is ultimately determined by protein activity levels, which of course are determined by rate of degradation or inactivation as well as production. Dissmeyer reviews the Cys/Arg branch of the N-degron pathway (previously called the N-end rule pathway) that contributes to protein degradation. In this pathway, post-translational modifications including excision of the N-terminal Met to reveal a Cys or other “destabilizing” residue, and oxygenation and arginylation, leads to recognition, ubiquitination and protein degradation. The review discusses the biochemistry of the pathway including the mutants that helped define it in plants, and the similarities and differences between the pathways in plants, animals and fungi. The review also covers the contributions of the N-degron pathway in stress responses, including the well characterized role in the response to hypoxia. (Summary by Mary Williams) Annu Rev. Plant Biol. 10.1146/annurev-arplant-050718-095937 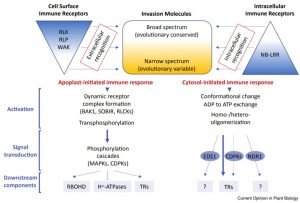 Interactions between plants and microorganisms occur in many different ways and on many different levels. Scientists have been attracted to this field of research because of the need to identify the agents causing infectious diseases in economically important crops. Models have been developed to describe the coevolution of plants and microbial attack. Models are abstract representations of reality. Their purpose is to reduce the complexity to a manageable and understandable level. A model is, essentially, a microcosm of scientific hypothesis generation. However, as George E.P. BOX said: “Remember that all models are wrong; the practical question is how wrong do they have to be to not be useful.” A valuable used in the study of plant–microbe interactions is called the ‘zigzag’ model, which encompasses two branches of the plant immune system: Pattern-Triggered Immunity and Effector-Triggered Immunity. Thirteen years after the zigzag model was proposed, two reviews, by Van der Burgh and Joosten, and Kanyuka and Judd, take a fresh look at it with the aim to consider how well it fits its intended purpose, and how a model framework to inspire future researchers in the field of plant–microbe interactions might develop. Both reviews propose that the model be revised to emphasize where the microbe is perceived, by either cell-surface immune receptors, leading to apoplast-initiated immune responses, or intracellular immune receptors, leading to cytosol-initiated immune responses. (Summarized by Francesca Resentini) Trends Plant Sci 10.1016/j.tplants.2019.04.009 and Curr Opin Plant Biol 10.1016/j.pbi.2019.02.005 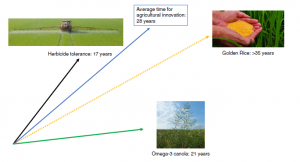 Evolution of vascular plants through redeployment of ancient developmental regulators

Land plants (Tracheophytes), utilize the well-developed vascular tissue for conducting water and other nutrients necessary for plant growth. In Arabidopsis and other land plants, the key player of vascular cell division is well characterized and this includes the TMO5-LHW (TARGET OF MONOPTEROS 5 – LONESOME HIGHWAY) heterodimerization, downstream of auxin signaling. Loss of either one of the basic Helix Loop Helix (bHLH) transcription factors leads to reduced cell division during vascular development. In this paper, Hofland et al. identified the evolutionary conservation of TMO5 – LHW dimerization using the genomics data from onekp project and determined heterdimerization of potential orthologs. Through complementation assays in planta the authors have shown that TMO5-LHW dimerization, which promotes cell division necessary for vascular development, evolved during the origin of land plants. (Summary by Suresh Damodaran) bioRxiv 10.1101/650358 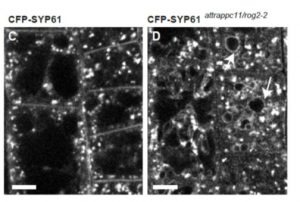 Transport protein particles (TRAPPs) are multisubunit complexes that regulate intracellular trafficking, but haven’t yet been well characterized in plant cells. The authors previously identified AtTRAPPC11 as an abundant protein in the SYP61 vesicle proteome, with homology to mammalian TRAPPC11. Here, Rosquete et al. show that loss-of-function of TRAPPC11 causes abnormalities in the SYP61 vesicle trafficking and abnormalities in the trans-Golgi network/early endosome, which is a protein trafficking hub. Furthermore, loss-of-function mutants showed hypersensitivity to salt stress. (Summary by Mary Williams) Plant Cell 10.1105/tpc.19.00110 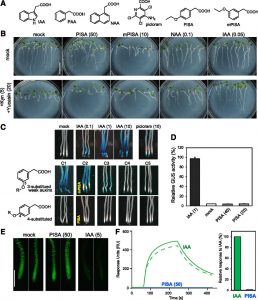 Auxin transport regulated by directional transporters such as PIN (PIN-FORMED) proteins ensures maintenance of proper auxin levels for growth and development. Plants modulate auxin flow by regulating the localization of PIN through exocytosis and endocytosis allowing recycling of PIN protein within a cell. In search of modulators of PIN internalization during such regulation, Oochi et al. have identified ethoxyphenylacetic acid (PISA/Pinstatic acid). The major characteristic of PISA includes its inability to participate in the canonical auxin signaling pathway via the SCFTIR1/AFB complex, therefore it is unable to induce the auxin responsive marker DR5. When assayed for auxin-related developmental phenotypes, PISA showed auxin-like effects including on root elongation. In comparison to known transport inhibitors of auxin, PISA exhibited positive effect on shootward IAA flow in the root. PISA-mediated PIN internalization causes an increase in auxin efflux and subsequent phenotypes. Dissection of a detailed mechanism of this transport modulator will help understand the regulation of auxin flow. (Summary by Suresh Damodaran) Plant Physiol. 10.1104/pp.19.00201 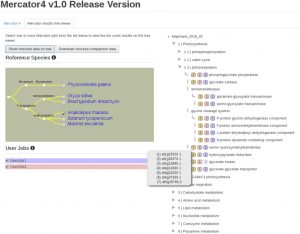 Revolutions in omics technologies have rapidly increased the number of plant genomes, transcriptomes and proteomes available. However, protein sequences need to be assigned a biological function to provide useful insights for comparative genomics and transcriptomics. Here, Schwacke et al present MapMan4, a tool to classify proteins and provide ontology information for omics data as well as an associated package, Mercator, an online protein annotation tool. MapMan4 is compared against other ontology tools including Gene Ontology (GO) and KEGG. Arabidopsis thaliana is annotated at a success rate of 47% using Mercator compared to 32% using a KEGG annotation. The authors demonstrate these techniques by studying gene loss in parasitic plants. More information about MapMan4 and Mercator is available (Summary by Alex Bowles) Molecular Plant 10.1016/j.molp.2019.01.003

Most synthetic pesticides do not stick well on plants especially during raining season and can be washed off during irrigation shorty after application. Therefore, the farmer may need to apply several times or hope for dry days to spray. Swinges et al. developed a synthetic peptide with two separate functional groups; one adheres to the surface wax of the leaf to hold the pesticide in place while the other has antimicrobial activity. First, they tested various peptides for their ability to bind GFP to the surface of soybean leaves, and showed that a naturally occurring peptide thanatin (THA) does this in a rainfast manner. Then made a fusion of THA with DS01, a peptide known to protect soybean from Phakopsora pachyrhizi, the fungus that causes Asian soybean rust. Plants sprayed with this difunctional peptide showed resistance to soybean rust even after rinsing. (Summary by Adenike Ayoade) Green Chemistry 10.1039/C9GC00457B 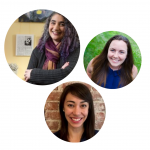