Review: The great diversity in kinds of seed dormancy: a revision of the Nikolaeva–Baskin classification system for primary seed dormancy ($) 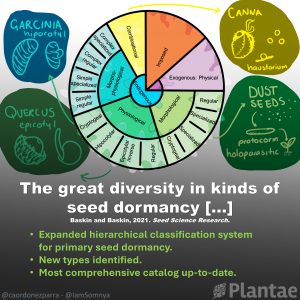 In 1967, Marianna G. Nikolaeva presented the first detailed system to classify seed dormancy based on its causes and the conditions required to break it. Later in 2004, Jerry and Carol Baskin devised a hierarchical classification system based on Nikolaeva’s proposal, which has been widely used by seed biologists all over the world. Now, the Baskins have come together again to bring us an updated and expanded version of the Nikolaeva-Baskin classification system. Most notably, several new dormancy kinds are included inside physiological, morphological and morphophysiological dormancy classes. For example, seeds whose epicotyl or hypocotyl emerge from the seed way after radicle protrusion now have a specific place in the system. Moreover, this system is the first proposal that includes specific categories for the dormancy found in orchids, mycoheterotrophs and holoparasites with undifferentiated embryos. Additionally, it reviews our current knowledge on the seed dormancy of plants with distinct seed morphologies, such as those of palms and seagrasses. This paper provides an up-to-date vision of seed dormancy, showing the outstanding diversity of mechanisms that shape germination in different species and ecosystems, making it a must-read for every plant biologist. (Summary and sketch by Carlos A. Ordóñez-Parra @caordonezparra and Eddy Mendoza-Galindo @IamSomnya) Seed Sci. Res. 10.1017/S096025852100026X 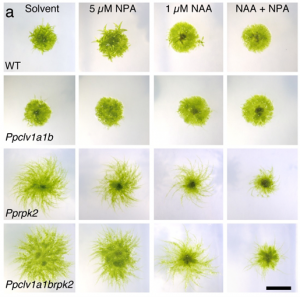 The size and shape of aerial organs in angiosperms is determined by the activity of shoot apical meristem cells. The mechanism by which this cell population is maintained has been well described in Arabidopsis, and involves a negative feedback loop of diffusible CLAVATA peptides and the transcription factor WUSCHEL. However, in bryophytes WUSCHEL is not essential for stem cell maintenance, posing questions about the evolutionary origins of stem cell regulation in the last common ancestor of land plants. In this study, Nemec-Venza et al. show that in the moss Physcomitrium patens, CLAVATA genes regulate stem cell identity by altering the activity of the plant hormone auxin. The group utilized plants with knock-out mutations in CLAVATA family genes alongside chemical modulators of auxin activity to unravel the complex interplay between these two pathways. Through this approach, they identified the receptor-like kinase PpRPK2 as the key regulator of stem cell identity and organ shape via its effect on auxin homeostasis. The authors thus suggest that the regulatory network consisting of CLAVATA, auxin and stem cell function is conserved across land plants, while the WUSCHEL gene family was incorporated into the pathway following the emergence of vascular plants. (Summary by Rory Burke @rorby95) New Phytol. 10.1111/nph.17969 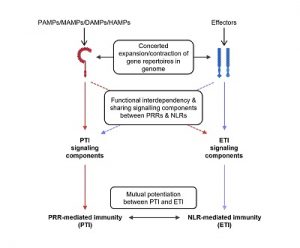 In plants, immune signalling and the corresponding defence responses are initiated by direct or indirect recognition of pathogen molecules via immune receptors. In the plasma membrane, pattern-recognition-receptors (PRRs) recognize signs of invasion and pattern-triggered immunity (PTI) is initiated. Inside the cell, nucleotide-binding LRR (NLR) receptors recognise race-specific microbial effectors (or their actions) and effector-triggered immunity (ETI) is elicited. It was originally thought that PTI and ETI were independent but recent reports have shown that these two pathways share signalling components and work synergistically. This makes PRRs and NLRs functionally-dependent and therefore likely to have co-evolved. A preprint by Ngou et al, tested this hypothesis by analysing plant receptor repertoires. The authors reported that the expansion or contraction immune PRR repertoires in plants coincide with those of NLRs. This indeed suggests an evolutionary relationship between these receptors. (Summary by Mariana Schuster @MariSchuster) bioRxiv 10.1101/2022.01.01.474684 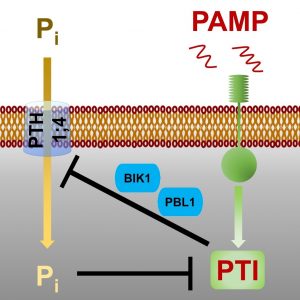 Plants have evolved signaling cascades to survive biotic and abiotic stresses, and recent studies have shown that there is crosstalk between many of these pathways.  In a recent study, Dindas et al. developed a micro-electrode-based system to detect active inorganic phosphate (Pi) transport in Arabidopsis seedlings in real-time. Pi transport can be observed as membrane depolarization when the seedlings are transferred from Pi-deficient media to Pi-containing media. This Pi transport is mediated by PHOSPHATE TRANSPORTER (PHT1;4). The authors observed the lack of this transport if PAMP triggered immunity (PTI) is activated before Pi supplementation. On the other hand, PHT1;4 mediated Pi uptake negatively regulates plant immunity. Two known plant immunity-related kinases BIK1 and PBL1 appear as key intermediates in this Pi transport-immunity crosstalk. When grown in natural soil, mutants of BIK1 or PHT1 show altered root microbiome than their respective wild-type plants. This indicates that Pi transport across the membrane can play a role in determining  structure of microbial community in the roots. Overall this article presents a method for the detection of real-time Pi uptake and identifies key players involved in crosstalk between abiotic and biotic stress tolerance. (Summary and image by Kamal Kumar Malukani, @KamalMalukani) Curr. Biol. 10.1016/j.cub.2021.11.063 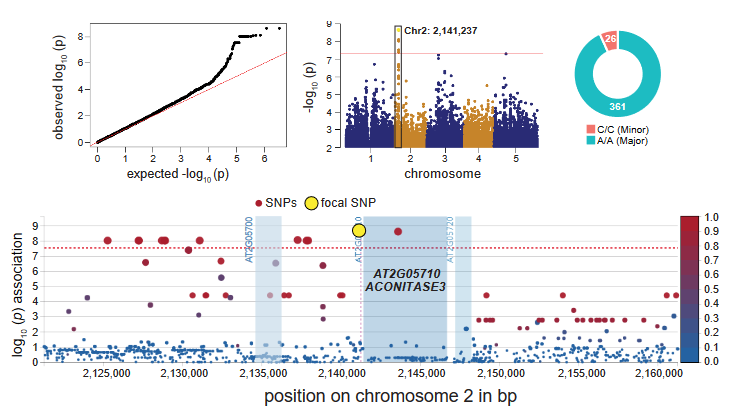 Climate change is affecting the frequency and intensity of extreme climatic events such as floods, reducing crop production severely. Submergence might lead to a lack of O2, light, and carbon dioxide, having an impact on the carbohydrate content and ATP synthesis. In this work, Xiangxiang et al. characterise a collection of 387 Arabidopsis accessions, which were subjected to prolonged submergence followed by recovery. Seven traits were quantified, including protein, nitrate and chlorophyll concentrations which showed a positive correlation after recovery. Genome-Wide Association Studies (GWAS) were performed to find associated Single Nucleotide Polymorphisms (SNPs) with the measured traits. As a result, the ACONITASE 3 (ACO3) gene was found and functionally characterized: the authors observed that the protein is localized in the mitochondria during submergence. They also suggest that an SNP found in the ACO3 promoter might affect the binding site of ANAC017, a transcription factor that regulates the mitochondrial retrograde response. Finally, RNA-seq in knock-out and overexpression lines showed that ACO3 impacts on the regulation of nitrogen assimilation and in the TCA cycle during acclimation to submergence and recovery. (Summary by Eva Maria Gomez Alvarez, @eva_ga96) Plant Physiol. 10.1093/plphys/kiac011

Plant salt tolerance through a peptide and receptor like kinase pathway 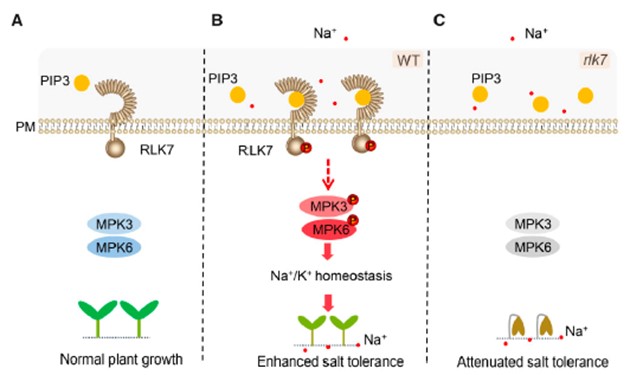 Soil salinity is a major stress that hampers plant growth, but plants have evolved signaling pathways to sense and respond to salinity.  Zhou and colleagues have recently reported a novel pathway in Arabidopsis thaliana that that involves a peptide ligand, PAMP-INDUCED SECRETED PEPTIDE 3  (PIP3) and its cognate receptor, RECEPTOR-LIKE KINASE 7 (RLK7). Exposure to salt can up-regulate the expression of the precursors of PIP3, i.e., prePIP3. The PIP3 over-expressing plants generated during the study grew better in salt and accumulated less Na+  than wild-type plants.  The PIP3 mutants show an opposite phenotype, with slow growth in salt  and higher accumulation of Na+  than wild-type plants. Interestingly, synthetic PIP3 could rescue the sensitive phenotype of the PIP3 mutants. The target for PIP3 is the membrane localised RLK7, and the RLK7 mutants also showed compromised growth under salt stress condition similar to the PIP3 mutants. In the pathway, PIP3 acts upstream of RLK7. The authors have further demonstrated that salt stress can induce phosphorylation of RLK7 and presence of PIP3 enhances it. Finally, they have shown that the PIP3-RLK7 together can regulate the activation of MPK3/MPK6 pathway (via phosphorylation) which leads to the enhanced salt tolerance. A follow up question to this particular study will be  identifying the possible target(s) downstream MPK3/MPK6 that play a role in the Na+ homeostasis in plants.   (Summary by Sibaji K Sanyal @SibajiSanyal) Plant Cell 10.1093/plcell/koab292 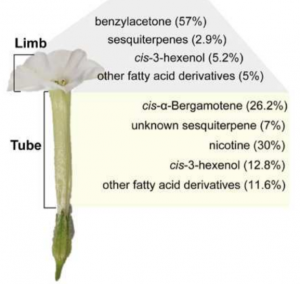 Release of scents or volatile compounds influence pollinator preference for or localisation of many flora. In excess of 1,700 distinct floral scents have been classified to date, yet our understanding of biosynthetic processes associated with many scents is limited. Kang et al. recently determined the biosynthetic pathway associated with a wild tobacco volatile compound known as benzylacetone (BA). BA is released from Nicotiana attenuata in a diurnal pattern to attract pollinators. Through isolation of BA-releasing wild tobacco cells, subsequent single-cell RNA-sequencing and gene silencing, cellular actors regulating BA biosynthesis were identified. These actors include the epidermal enzyme phenylalanine ammonia-lyase 4 (NaPAL4) which commences BA biosynthesis and the MYB transcription factor NaODO1-like which may regulate BA biosynthetic genes. Reducing transcriptional heterogeneity by selecting BA-releasing cells, permitted the metabolite regulatory process to be targeted and delineated. This process may be extended beyond floral scent analysis to other useful plant metabolites going forward. (Summary by Orla Sherwood, @orlasherwood) New Phytol. 10.1111/NPH.17992 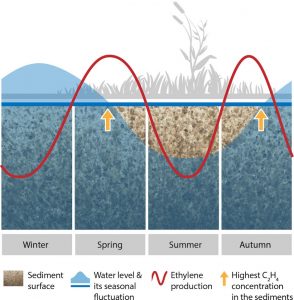 Light, temperature, substrate moisture and oxygen availability are renowned germination triggers for wetland species. However, wetlands sediments are a significant source of gases that might shape the species germination behavior, such as ethylene –a renowned germination promoter. Still, little is known about how this gas interacts with other biotic and abiotic factors, limiting our knowledge about its ecological relevance. Here, Phartyal and colleagues assessed the effect of ethylene on the germination of six wetland species and its interaction with dormancy and other germination triggers. Ethylene was ineffective in breaking the dormancy of these species. Still, it accelerated the germination of non-dormant seeds and increased it in light, temperature and oxygen conditions that otherwise were suboptimal. Since ethylene concentration varies according to seasonal fluctuations in water level, the concentration of this compound acts as a flooding-sensing mechanism that helps seeds synchronize germination with ideal conditions for seedling establishment. Therefore, this research provides an exciting starting point for future studies about the effect of this gas on the germination ecology of wetland species. (Summary by Carlos A. Ordóñez-Parra @caordonezparra) Plant Biol. 10.1111/plb.13385 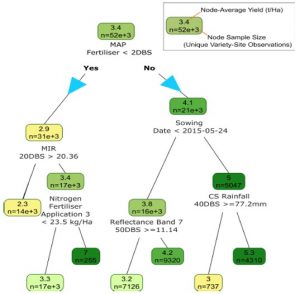 Machine Learning (ML) is described by Wikipedia as ‘the study of computer algorithms that can improve automatically through experience and by the use of data’. In agronomy, machine learning can predict important crop traits (including yield) by analysing the large datasets such as data generated from field trial experiments conducted for several years and form models that can help in understanding plant behaviour. To train their ML algorithms, Newman and Furbank used the Australian National Variety Trial’s satellite data, which includes experiments spanning 10 years from huge plant population with proper experimental controls. The resulting algorithms have predicted important agronomic traits (like yield, flowering, and grain protein) and factors that can effect productivity (like latent heat flux, stomatal conductance and canopy transpiration rates). The authors propose that ML can generate unified models that can integrate data from multiple experiments (metabolic, transcriptomic, proteomic and phonemic) that aid in better cultivation practices. They also observe that satellites are better suited to capture environmental variation compared to ‘ground-stations’ and drones and that satellite data are becoming widely availalbe so have an important future in agronomy. (Summary by Sibaji K Sanyal @SibajiSanyal) Nature Plants 10.1038/s41477-021-01001-0 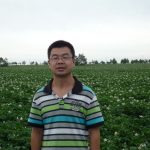 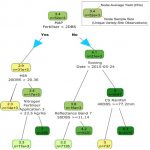