Review: Age is NOT just a number 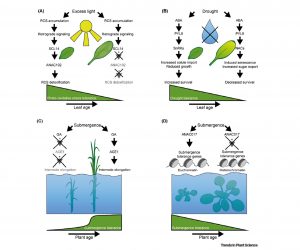 Aging of plants is marked by the growth and differentiation of individual organs, as well as transitions of the whole plant through developmental phases: juvenile, vegetative adult, and reproductive phase. In their recent review, Rankenberg et al. discuss how abiotic stress responses vary in plants with their age. Spatiotemporally regulated and meticulously coordinated action of several proteins and miRNAs orchestrate the organ development and phase transitions in plants. In addition to the morphological and anatomical changes, aging also drives changes in the biochemistry of leaves, especially redox homeostasis, hormonal levels, and source-sink balance. These changes, together with the changes in multiple signaling pathways contribute to the age-related differences in the ability of plants to cope up with abiotic stress conditions. In general, the resilience against challenging environmental conditions such as excessive light, drought, salinity, and water-logging is gradually compromised with increasing age. This is primarily because of the failure to activate the signaling pathways that regulate the mechanisms of ROS detoxification, stress-induced senescence, and morphological plasticity, which collectively ensure better adaptation to abiotic stress. The authors conclude by strongly advocating the inclusion of developmental age as an integral component of abiotic stress research in the future. (Summary by Yadukrishnan Premachandran @yadukrishprem) Trends Plant Sci. 10.1016/j.tplants.2020.12.016 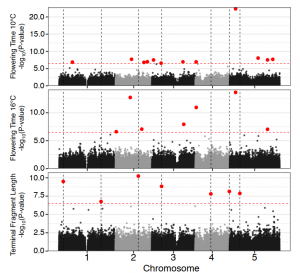 Telomeres (from Greek words meaning “end part”) are highly repetitive DNA sequences at chromosome ends that guard against degeneration during cell division. Though all eukaryotes possess telomeres, extensive interspecific variation exists for telomere lengths (300bp in yeast to 150kb in tobacco). Telomere length differences could have fitness effects subject to natural selection. In mammals, telomere shortening rates powerfully predict species life span, as shortening telomeres trigger aging. But how does telomere length evolution affect plant life-history strategies? In this Breakthrough Report, Choi et al. reveal that natural intraspecific variation in plant telomere length is associated with a crucial life-history trait: flowering time. A GWAS revealed thirteen regions associated with telomere length variation in Arabidopsis; one contains the telomerase gene TERT, and population genomic analysis supports a selective sweep at this region associated with longer telomeres. Among Arabidopsis ecotypes, the authors found a negative correlation between telomere length and latitude, and between telomere length and flowering time. In other words, Arabidopsis plants with longer telomeres flower earlier, and the same phenomenon is found in maize and rice, indicating that this relationship may be widespread. Possibly, longer telomeres could be more adaptive in plants with faster developmental rates that facilitate earlier flowering. This fascinating discovery indicates that chromosomal structure may be an adaptive trait connected with plant life-history strategies.  (Summary by Caroline Dowling @CarolineD0wling) Plant Cell 10.1093/plcell/koab022 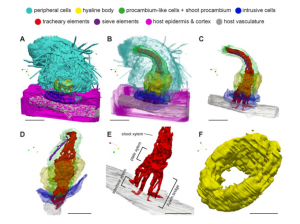 Parasitic plants form haustoria, which are specialized multicellular structures that penetrate into their host’s vasculature and act as conduits for nutrients.  The molecular and genetic contributors to haustorium development and function are well described. Here, Masumoto et al. have provided new insights into haustorium formation and structure through 3D reconstruction of serial thin (1 micron) sections, looking at Striga hermonthica infecting rice and Phtheirospermum. japonicum infecting Arabidopsis. By identifying and color-coding each cell type, the authors were able to generate amazing 3D images of the interface between the host and parasite. By rendering different cell types transparent, the internal haustorial structures were made apparent. (Be sure to check out the supplemental movies.) Interestingly, there were some structural difference between the haustoria formed in the two systems, which will be interesting to address in other host-parasite pairs. (Summary by Mary Williams @PlantTeaching) Plant Physiol. 10.1093/plphys/kiab005 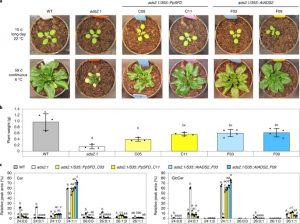 If you remember your biochemistry, lipids that are saturated (without double bonds) pack more tightly and therefore have a higher melting temperature than those that are unsaturated, therefore bend and pack less tightly (think of margarine versus oil). Plants can modify their membranes in a temperature-responsive way to maintain a consistent degree of fluidity. Resemann et al. addressed this in the model moss Physcomitrium patens. Previously they had identified a cold-induced desaturase, but when they knocked-out this gene they did not see any cold-sensitive phenotype. However, they undertook a lipidomics study of related mutants and identified abnormalities in very-long chain fatty acids that were exacerbated by cold treatment; some of the mutants showed a cold-sensitive phenotype that was rescued by an Arabidopsis desaturase gene. Interestingly, this gene clearly has a distinct evolutionary origin from the moss gene, suggesting a convergence of function. The authors speculate that the loss of vegetative desiccation tolerance in vascular plants may be reflected by their differences in lipid composition from the more resilient mosses. (Summary by Mary Williams @PlantTeaching). Nature Plants 10.1038/s41477-020-00844-3 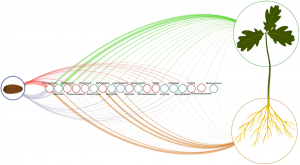 All plant species are associated with a diverse yet distinct assemblage of microorganisms known as the microbiome. Traditionally, the environment is considered the primary source of these microbes. However, Abdelfattah and colleagues’ fascinating research shows that seeds can act as vehicles to share microorganisms between plant generations. Quercus robur acorns were grown in sterile conditions in a novel device that prevented microbial exchange between above- and below organs, ensuring seeds were the only source of microorganisms and each part’s microbiome could develop independently. Once germinated, the phyllosphere and root microbiome were sequenced using fungal ITS and bacterial 16S rDNA sequences and compared to those of the embryo and the pericarp. The embryo and the phyllosphere had very similar microbiomes, while the pericarp and the root had distinct and less diverse microbial communities. For instance, while several genera were shared between organs, they exhibited significant differences in their relative abundances. As a result, this research provides fascinating evidence of the vertical transmission (between generations) of microbial assemblages in plants. Moreover, it illustrates that after germination, the microbes associated with the seed diverge and form distinct communities related to each organ. (Summary by Carlos A. Ordóñez-Parra @caordonezparra) Environ. Microbiol. 10.1111/1462-2920.15392 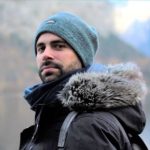 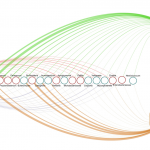 Experimental evidence of microbial inheritance in plants and transmission routes...
Scroll to top