Welcome to the penultimate 2018 collection of plant research highlights. Starting this week, for search engine optimization (SEO) purposes we are renaming the series “Plant Science Research Weekly“. We thank contributors and readers for their ongoing support.

We started this project more than two years ago (October 2016) for several reasons. Firstly, as a one-stop-shop for plant scientists to browse through recent high-interest papers (inspired by Science magazine’s weekly column, This Week in Other Journals, but with a plant focus). We also wanted to provide opportunities for early-career scientists to build skills and experiences, so many of our contributions are selected and written by members of our Plantae Fellows community.

Occasionally we work with Guest Editors who take charge of the column for the week. 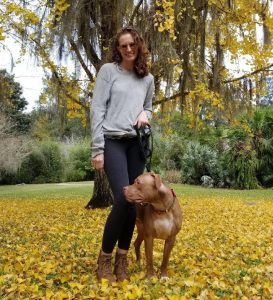 This week’s edition is guest edited by Katie Rogers.

Katie is a Ph.D. candidate at the University of Florida studying plant breeding and molecular biology. Her research is focused on the characterization and induction of precocious flowering in Citrus. She has also been working as a Social Media and Digital Communications intern for ASPB since February 2018.

Review: The evolution of root branching: increasing the level of plasticity ($) 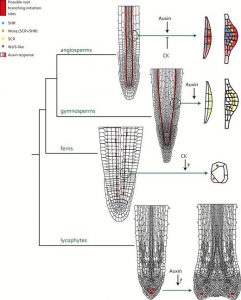 Without roots, plants are unable to gain height due to poor anchorage and are less fit for survival outside of humid environments. Root branching allows plants to better adapt to their environmental conditions and improves their capability to forage for water and nutrients. In this review, Motte and Beeckman explore major differences in the way branching occurs between different clades and goes underground to provide an overview of the root architecture and plasticity of the most important plant groups. For example, lycophytes, the most ancient land plants with roots, only branch at the root tip, whereas ferns are able to form roots laterally in a fixed pattern along the main root. In seed plants, lateral roots can be produced at almost any position along the main root, allowing them to grow in very diverse environments. In this interesting review, Motte and Beeckman also discuss lateral root formation in angiosperms, look for conservation within seed plants, and speculate on the molecular components that could be considered as original root branching regulators. (Summary by Katie Rogers) J. Exp. Bot. 10.1093/jxb/ery409 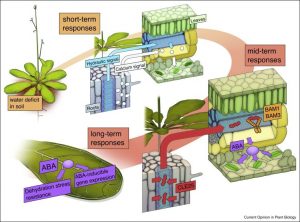 To compensate for their lack of a nervous system, vascular plants have developed complex mechanisms to connect their organs and coordinate stress. Many different types of molecules are involved in long-distance signaling and must be integrated to maintain homeostasis. In this review, Takahashi and Shinozaki explore current knowledge of plant molecules including small proteins, peptides, RNAs, metabolites, and second messengers and their important roles in plant defense and adaptation. The authors place a special emphasis on mobile peptides and their recently discovered as roles as mobile mediators that complement the regulatory functions of phytohormones. (Summary by Katie Rogers) Curr. Opin. Plant Biol. 10.1016/j.pbi.2018.10.006 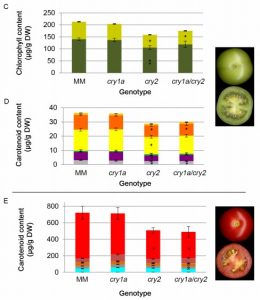 Cryptochromes are a class of flavoproteins found in plants and animals that are sensitive to blue light. In Arabidopsis, cryptochromes are involved in many important physiological processes including de-etiolation, flowering, circadian rhythms, cotyledon opening and expansion, anthocyanin accumulation, and root growth. In economically important crops, these photoreceptors could be manipulated to influence horticultural traits such as flowering time and fruit quality. In tomato, cryptochromes are encoded by a multi-gene family, comprising CRY1a, CRY1b, CRY2 and CRY3.

Here, mutant analysis has uncovered key roles for cry1a and cry2 during tomato development. cry1a negatively influences seed weight, whereas both cry1a and cry2 are able to drive the control of hypocotyl elongation and primary root development in young plants. Both cry1a and cry2 control the levels of photosynthetic pigments in leaves, and cry2 has a predominant role in fruit pigmentation. Mutants without functional cry1a and cry2 accelerated flowering time and advanced in the circadian phase. Cryptochromes also influenced the tomato metabolome, both in leaves and fruits. Overall, the authors conclude that “cry1a and cry2 represent promising molecular targets to manipulate fundamental physiological processes in tomato”. (Summary by Katie Rogers) Plant Physiol. 10.1104/pp.18.00793 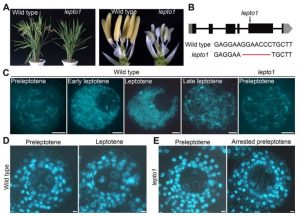 In rice, successful completion of meiosis to generate haploid cells is essential for seed production and propagation. This process is complex, requires precise regulation, and produces visible changes in the structure of chromosomes. In this paper, Zhao et al., characterize a sterile rice mutant with defects in leptotene, an early stage of prophase I in meiosis, and used map-based cloning to identify an OsRR24/LEPTO1 type-B response regulator involved in the establishment of meiotic leptotene chromosome. The authors used chromosome staining techniques to visualize meiosis in lepto1 mutants and found that while meiosis initiates normally, the pollen mother cells (PMCs) fail to form the thin thread-like structures typical of leptotene chromosomes. Mutants also fail to form chromosomal double-strand breaks, do not recruit meiosis-specific proteins to the meiotic chromosomes, and show disrupted callose deposition. LEPTO1 is also shown to interact with two rice histidine phosphotransfer proteins, OsAHP1 and OsAHP2, via its conserved signal receiver domain . Collectively, this evidence suggests that LEPTO1 may act as a transcription factor to regulate the expression of genes to affect the development of meiocytes and nurse cells. (Summary by Katie Rogers) Plant Cell 10.1105/tpc.18.00479 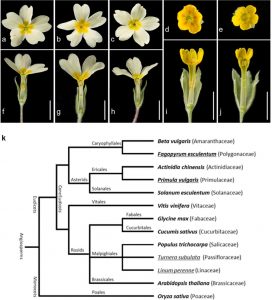 Floral heteromorphy (differences in form) in Primula has long been of interest to plant biologists. Over 150 years ago, Charles Darwin recognized the importance of this floral anatomy for promoting cross-pollination. In heterostylous Primula species, plants produce either, pin or thrum flowers. Pins have a long style and low anthers, whereas thrums have a short style and elevated anthers. This arrangement physically promotes cross-pollination. Here, Cocker et al., describe the 411 Mb P. vulgaris genome, show that there are more genes twice as many genes upregulated in thrum flowers than are upregulated in pin flowers. The authors define the conserved structure and expression of the S (Style length) locus genes in thrum, suggesting that the thrum-specific architecture of the Primula S locus is an evolutionary-conserved feature. (Summary by Katie Rogers) Sci. Reports 10.1038/s41598-018-36304-4

An unexpected flower from the Jurassic of China 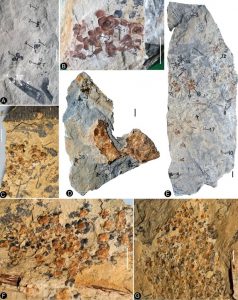 The economic importance of angiosperms, whether for food, ornamentals, timber, pharmaceuticals, or any other commercial product is easy to prove. However, their origin is not. Evolutionary biologists have long debated the origin of flowering plants. Fu et al., have unearthed fossils from the Early Jurassic period that suggest angiosperms may have been here longer than we previously thought. Previously available fossil flowers appeared about 125 million years ago in the Cretaceous era, during which many pollinators also emerged, although, genetic analysis has suggested that flowering plants are much older. Now Fu et al. have located 264 specimens of 198 individual flowers in South Xiangshan Formation that suggest that flowers bloomed in the Early Jurassic, more than 174 million years ago. They describe a fossil flower, Nanjinganthus dendrostyla gen. et sp. Nov.. with a cup-form receptacle and ovarian roof that together enclose the ovules/seeds, consistent with the defining characteristics of an angiosperm. (Summary by Katie Rogers) eLIFE 10.7554/eLife.38827 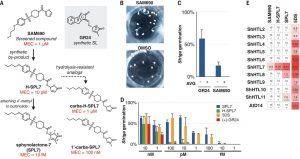 Striga hermonthica (Striga) parasitizes a wide range of crops including sorghum and rice, mainly  in sub-Saharan Africa. This parasite decreases crop yields and results in billions of dollars in economic damage. Striga seeds are numerous and remain dormant in the soil until prompted to germinate by the presence of host-generated hormones called strigolactones. Application of these hormones prior to planting can be effective to remove Striga seeds because the parasite is obligate, and thus cannot survive in the absence of a host. However, strigolactones also attract root symbiotic arbuscular mycorrhizal fungi that supply host plants with nutrients. Therefore application prior to planting can still be detrimental to overall plant health. In this paper, Uraguchi et al., have developed a hybrid molecule that can be used at a very low concentration to initiate Striga germination without interfering with strigolactone-dependent events in the host and may potentially give farmers an additional method to protect fields from Striga infestation. The authors say that this strategy might also be applicable for the control additional parasitic weeds such as Orobanche or Phelipanche.  (Summary by Katie Rogers) Science 10.1126/science.aau5445
Greatly enhanced removal of volatile organic carcinogens by a genetically modified houseplant ($) 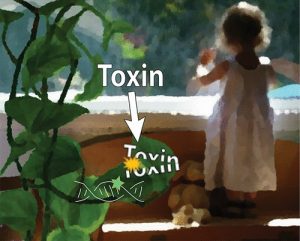 Plants provide us with food, fiber, shelter, medicine, and fuel. In the process, they also release the oxygen that we breathe. Now, they can also help remove carcinogens from our homes. Zhang et al., have developed a genetically modified a common houseplant, Epipremnum aureum, pothos ivy, that can remove chloroform and benzene from the air around it. These biofilter plants which are easy to grow at home have been transformed with synthetic mammalian cytochrome P450 2e1, a protein that is present in all mammals. In humans, this protein functions in our livers to remove toxins when they are present, but here, the authors have constitutively expressed the rabbit 2e1 in pothos ivy to constantly remove pollutants from surrounding air. To test how well the modified plants work, they were placed in glass tubes with high concentrations of benzene and chloroform. After 3 days, the concentration of chloroform dropped by 82 percent, and it was almost undetectable by day six. Wild-type plants under the same conditions did not show significantly reduced levels of these pollutants. This transgenic method would require little energy beyond that used to provide air circulation and could be a very sustainable phytoremediation solution. (Summary by Katie Rogers) Environ. Sci. Technol. 10.1021/acs.est.8b04811

The holiday season is upon us! If you are looking for a good book to read and relax with, browse the Plantae Bookshelf Network to find your next favorite. In this post, Juniper Kiss has compiled a list of some of your 2018 favorites including, She Has Her Mother’s Laugh by Carl Zimmer, The Food Explorer by Daniel Stone, The Overstory by Richard Powers, Weird Plants by Chris Thorogood, Orchid Summer by Jon Dunn and many more. Happy Holidays and happy reading! 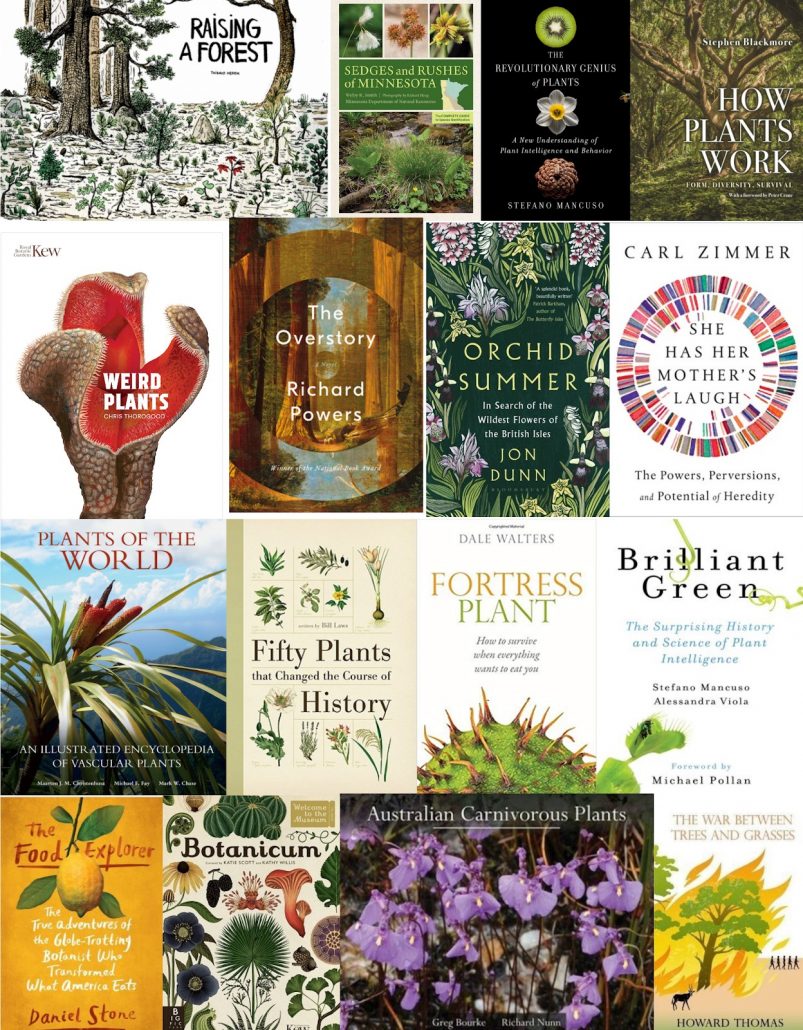