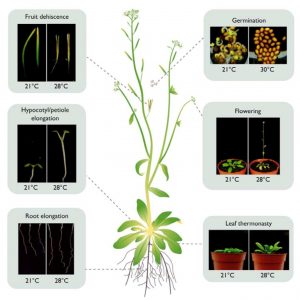 Review: Developmental responses to water and salinity in root systems ($) 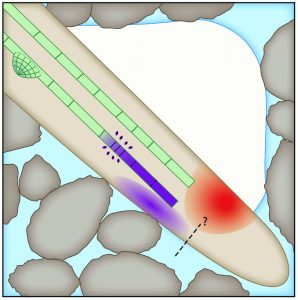 Plants lack organs that are analogous to human ears, eyes or fingertips, yet they can detect changes in their environment. In this review, Dinneny describes how sensing heterogeneities in salt and water leads to changes in root architecture, optimizing soil foraging. The root tip typically follows the water gradient (hydrotropism), while it avoids soil patches with high salt concentrations (halotropism). Water foraging is further enhanced by hydropatterning, where lateral roots develop in the regions with high hydraulic conductivity in the growing parts of the root system. Steeper positioning of the lateral roots corresponds to better growth under decreased water availability at the surface. While some plants show phenotypic plasticity of the gravity setpoint angle of the lateral roots in response to drought, the molecular mechanisms underlying this process remain to be identified. (Summary by Magdalena Julkowska) Annu. Rev. Cell Biol.  10.1146/annurev-cellbio-100617-062949 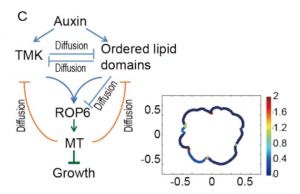 Membranes were once considered somewhat inert materials in a cell’s organization, but it is becoming clear that lipid composition and distribution contributes actively to cell shape and dynamics. Pan et al. examined the contribution of lipids to the shape of epidermal pavement cells in Arabidopsis leaves. They found that the indentations of the pavement cells show more ordered lipids (using a dye selective for lipid order) and accumulate flotillin proteins, previously shown to associate with sterol-rich membrane nanodomains. Furthermore, pavement cell shape is disrupted in mutants deficient in sterol synthesis. They also found that auxin is required for the promotion of lipid ordering and the formation of cell-surface transmembrane receptor-like kinase 1 (TMK) nanoclusters. Nanoclustering of TMK1 and ROP6 affects cell shape through interactions with cortical microtubules, which also feedback and reinforce the membrane nanodomains. This study supports the emerging model that membrane nanodomains are important contributors to auxin responses. (Summary by Mary Williams) bioRxiv 10.1101/734665 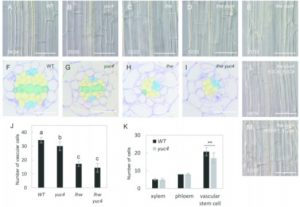 Proper development of root vascular tissue is necessary for plant growth, as these tissues are responsible for nutrient and water uptake. Multiple key players including transcriptional factors (TF) and hormones are involved in vascular development. In this paper Ohashi-Ito et al. have identified a feedback loop mechanism involving the heterodimer complex LHW (LONESOME HIGHWAY, a bHLH TF) – TMO5 (TARGET OF MONOPTEROS 5) and auxin biosynthesis. The auxin biosynthesis occurs via a two-step pathway catalyzed by enzymes YUCCA (YUC) and TAA. YUC4 expression in the root apical meristem regulates local auxin biosynthesis and is downstream of LHW-TMO5. The loss of function mutant yuc4 has reduced auxin levels and fewer cambium cells in the root vasculature. On the other hand, the expression levels of LHW and TMO5 are reduced in the yuc4 mutant suggesting a possible feedback loop through which auxin regulates root vascular cell differentiation. (Summary by Suresh Damodaran) Plant Cell Physiol. 10.1093/pcp/pcz156

Growth is driven by cell expansion, which is driven by both synthesis of metabolites and osmotically-driven expansion. This latter contribution is typically overlooked in metabolic flux analysis. To remedy this, Shameer et al. have developed a model, GrOE-FBA (Growth by Osmotic Expansion- Flux Balance Analysis). By combining previously described osmotic constraints with biomass constraints, they were able to perform flux-balance analysis (FBA) while accounting for cell volume. They used their model to analyze the metabolic fluxes in dividing and expanding cells. Their predicted values matched closely to experimentally measured values. Interestingly, their data show that the metabolic demands of growth by cell expansion are closely matched to those of growth by cell division, probably due to the metabolic costs of synthesizing and importing osmolytes. Their model provides insights into fruit development, including suggesting an explanation for the requirement for a transitory carbohydrate store in expanding fruits. (Summary by Mary Williams) bioRxiv 10.1101/731232 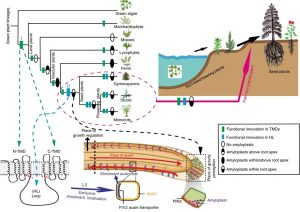 Plants’ invasion of land was accompanied by the evolution of a root system which in seed plants includes a fast gravitropic response. Gravitropism occurs through three distinct steps – (1) gravity perception by dense starch-filled amyloplasts, (2) transmission of gravitropic signal by auxin through auxin influx (AUX1/LAX) and efflux (PIN) carriers, (3) gravity-stimulated root growth response, which includes root bending through growth promotion and inhibition. In this study about the origin of fast root gravitropism, Zhang et al. demonstrated that gravity sensing amyloplasts are not present in basal land plants, but only in the root apex in the seed plants. Furthermore, only PIN2 can mediate fast root gravitropism in Arabidopsis, and PIN2 proteins are exclusively present in the flowering plants. Additionally, the authors found that efficient shootward auxin transport mediated by functional PIN for fast root gravitropism appeared first in the seed plants. These findings demonstrate that alongside new reproductive strategies, anatomical innovations in roots helped seed plants become the dominant group of vascular plants in most habitats. (Summary by Arif Ashraf) Nature Comms 10.1038/s41467-019-11471-8 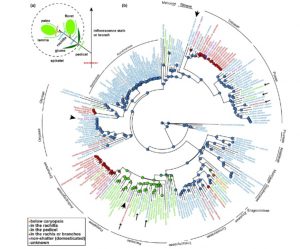 Grasses scatter their seeds through the process of cell abscission. Losing this trait, in a process known as loss of shattering, was an early step in the domestication of cereals. Interestingly, the abscission zone (AZ) is positionally and morphologically different in different cereals. In order to understand the diversification of this trait, Yu et al. set out to identify the phylogenetic distribution of AZ position, anatomy and underlying gene networks in grasses by comparing three species, a shattering weedy rice (Oryza sativa) Brachypodium distachyon, and Setaria viridis. They show that the ancestral AZ position is found in rice and Brachypodium, whereas Setaria shows the derived position. They also found that the set of genes expressed in the AZs differs independently from its position. They conclude, “the set of AZ genes is a species-specific subset of a generally conserved set of expressed genes, suggesting conservation of the overall developmental program through time but distinct spatial control.” (Summary by Mary Williams) New Phytol. 10.1111/nph.16087 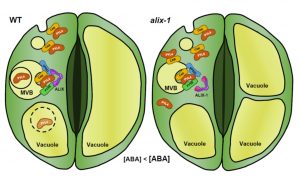 To balance water loss and CO2 assimilation, stomatal aperture is tightly controlled in accordance with environmental changes, mediated by ABA signaling. Here, García-León et al. found that ABA sensitivity and stomatal aperture are regulated by the trafficking and vacuolar degradation of ABA receptors (PYLs). This turnover is regulated by an ESCART-III-associated protein ALIX, which is able to bind PYLs directly, and ALIX-mediated PYL turnover may be responsive to ABA, in a form of negative feedback. This intriguing study illustrates not just a relationship between endosomal trafficking and ABA signaling pathway, but also a key molecular mechanism responsible for adaptation of plants to water-deficient environments. (Summary by Nanxun Qin) Plant Cell 10.1105/tpc.19.00399 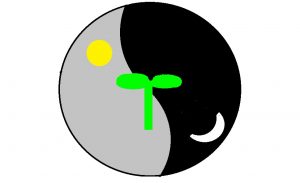 Plants’ internal circadian clocks regulate the timing of many physiological and developmental processes. This circadian clock also controls plant sensitivity to the herbicide glyphosate, which is maximally effective at dawn. Here, Belbin et al. showed that the minimum effective dose varies with time of day, and that Arabidopsis plants with abnormalities in their clock showed altered timing of sensitivity to glyphosate. To understand the molecular basis for this, they identified genes regulated by both time-of-day and glyphosate and identified several genes involved in auxin signaling, suggesting that, “inhibition by glyphosate of processes related to auxin signaling might underlie the rhythmic sensitivity of hypocotyl length to glyphosate.” This discovery reveals another sophisticated strategy of plants to track the rhythm of external changes, and also provided a basis to refine agrochemical development through extending the concept of chronotherapy to agriculture. (Summary by Nanxun Qin) Nature Comms. https://doi.org/10.1038/s41467-019-11709-5 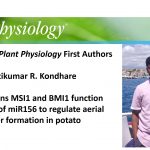 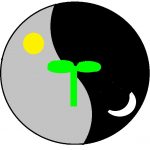