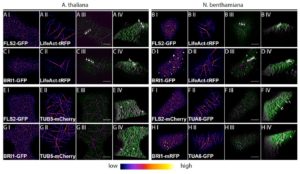 Signal transduction in plant and animal cells is often initiated at the plasma membrane (PM) and involves common signaling components, raising the question of how receptor complexes elicit distinct signaling outputs. To address this question, Bücherl et al. investigated physical characteristics of the transmembrane plant immune receptor FLS2 and growth receptor BRI1.  Using imaging techniques including live-cell imaging, single-particle tracking and quantitative co-localization analysis of leaf epidermal cells, the authors demonstrated that FLS2 and BRI1 receptors exhibit distinct spatial localization patterns within distinct PM clusters and exhibit different dynamics (steady-state FLS2 is more stable and less mobile than BRI1). This observation, coupled to the observation that only BRI1-containing complexes were associated with cortical microtubules, led the authors to conclude that spatio-temporal separation exists between immune and growth receptor-mediated signaling, a phenomena that is also observed in animal cells. This spatio-temporal separation may provide signaling specificity due to differential receptor localization and protein complex composition. The unique biochemical environments of the receptors may provide a mechanism for regulating intermolecular interactions and for adjusting signal transduction. Next steps include ascertaining whether the spatio-temporal separation of receptor complexes affects the phosphorylation of downstream shared signaling components and elucidating the stoichiometry of the unique PM signaling clusters. (Summary by Tyra McCray) eLIFE 10.7554/eLife.25114. 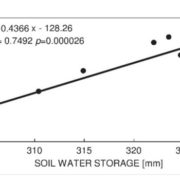 IRREGULAR POLLEN EXINE1 Is a novel factor in anther cuticle and pollen exine...