By Alex Harkess and Margaret Frank

While working on very small RNA molecules, Blake Meyers tackles some of the biggest problems in plant biology. Blake has spent much of his academic career generating and sifting through billions of sequence reads to ask a deceptively simple question: what do small RNAs do in a cell? Holding a joint position at the Donald Danforth Plant Science Center and the University of Missouri – Columbia, Blake has pushed the boundaries of plant genomics to answer this question by studying the evolution and function of genetic pathways that produce these small RNAs, as well as the transcriptional networks that they control.

Growing up in the college town of Williamsburg, Virginia, Blake was no stranger to academia. His father Terry Meyers is an Emeritus professor of English at The College of William and Mary, largely focused on Victorian poetry. His sister Deborah would follow an academic path, and is now a professor of Philosophy at the College of Charleston. With a healthy childhood love of the outdoors and nature, and a part-time job scrubbing dishes in the back of a restaurant, Blake formed an early interest in plants and food production. He soon started his undergraduate studies at the University of Chicago.

After quickly realizing that neither the humanities nor medicine piqued his interests as much as plant biology did, Blake began exploring opportunities for undergraduate research. As a research assistant in Deborah Charlesworth’s lab, he was exposed to evolutionary and population biology by studying the effects of inbreeding depression in the eudicot Collinsia heterophylla (Mayer, Charlesworth, and Meyers, 1996). Blake also read his first issues of The Plant Cell as an undergraduate researcher, while performing honors research in the lab of Manfred Ruddat. He remembers being particularly impressed by the glossy cover images in a time when most journals just used the cover for the table of contents. Midway through his college career, to better appreciate food production, Blake found a summer job working long hours in the dirt on an organic vegetable farm near rural Stover, Missouri. He enjoyed working with plants, observing the remarkable diversity in heirloom varieties, understanding the complexity of farming, and seeing first-hand how diseases and pathogens impact agricultural production.

Funded by an NSF pre-doctoral fellowship, Blake left for graduate school to pursue his M.S. and Ph.D. degrees with Richard Michelmore at UC Davis, work that largely focused on characterizing the diversity of nucleotide binding, leucine-rich repeat (NB-LRR, or NLR) disease resistance genes in lettuce. Midway through, Blake picked up DNA sequencing and analysis skills at a Cold Spring Harbor Laboratory short-course; the application of these skills to his research project led to the cloning and sequencing of NLR genes in lettuce. A major set of discoveries during his dissertation work led to the idea that resistance genes in lettuce (and other plants) were clustered in the genome, resulting from tandem duplications and subject to unique patterns of selection (Michelmore and Meyers, 1998). These complex genomic arrangements were exemplified by the lettuce Dm3 cluster, and while it complicated NLR identification and assembly, the data provided rich insights into NLR evolution. In 1998, Blake published the bulk of his dissertation research in a set of back-to-back manuscripts in The Plant Cell ( Meyers et al., 1998a and b).

Initially, Blake was hesitant to venture straight down the academic career path. After interviewing for multiple post-doc options in academic and industry labs, Blake decided on a post-doc fellowship at DuPont-Pioneer, where he could learn about industry research. The group he joined was aiming to sequence the maize genome, generating physical maps of the maize genome, coupled with Sanger sequencing of Bacterial Artificial Chromosome (BAC) clones. Working with a visiting scientist, Michele Morgante, Blake used sample sequencing and cDNA analysis to assess the structure, organization, and transposon activity of the maize genome. They found that the genome is dominated by several classes of retrotransposons that are highly methylated and inactive (Meyers, Tingey, and Morgante 2001). At that time, other scientists within the DuPont group were collaborating with a revolutionary genomics company, Lynx Therapeutics, founded in 1995 by geneticist Sydney Brenner. Lynx’s technology, called Massively Parallel Signature Sequencing (MPSS), generated the first true “next-generation” sequencing reads, a complex method using enzymatic processes of adapter ligation and decoding on individual oligo-coated beads. While Blake didn’t work on this collaboration, he was impressed by the advances made with this alternative to Sanger sequencing.

Although it was a successful post-doc in terms of science (and personally – his future wife was also a post-doc at Dupont-Pioneer), Blake’s passions remained in academia. He returned to the Michelmore lab for a second postdoc, managing an NSF Plant Genome Research Program (PGRP) grant focused on disease resistance genes. The Arabidopsis thaliana Col-0 genome had just been released, and Blake set about on the painstaking task of manually re-annotating NLR-encoding genes. Published in The Plant Cell (Meyers et al. 2003), two major results were particularly striking. First, the 150 Arabidopsis NLR genes often formed in segmentally duplicated clusters, very similar to what he saw in lettuce during his Ph.D. research. Second, automated gene prediction tools mis-annotated nearly a third of the NLR genes, and human input was still heavily required.

MPSS still lingered on his mind, though. In 2005, Lynx Therapeutics merged with UK-based Solexa, combining the hardware expertise of Lynx with the unique chemistry of Solexa; ultimately, the merged company was acquired by Illumina. At the time, Lynx Therapeutics’ MPSS method was a challenger to replace microarrays for gene expression quantifications, but the libraries yielded “only” a half million 17 nucleotide reads (for comparison, a current Illumina NovoSeq flowcell can produce more than 20 billion reads in two days). At the time, the method to generate the sequencing libraries took an entire room filled with equipment to load, sort, and sequence from cDNA-loaded beads, so a single library was costly and time-consuming to produce. At the yearly NSF PGRP awardee meeting, Blake heard a talk by Joe Ecker who was developing Affymetrix tiling microarrays to characterize gene expression in Arabidopsis. This particular type of microarray provided high resolution of transcriptional activity (ultimately published in 2003; Yamada et al. [2003]) yet incurred substantial up-front costs for probe synthesis. After speaking with NSF Program Director Jane Silverthorne about the MPSS technology, she encouraged him to apply for a PGRP award focused on testing and developing MPSS, as it hadn’t been used in the public domain. Blake was awarded the grant, but then left with an immediate problem: his molecular skills had been honed in the lab, but he didn’t have the computational background to develop new visualization and analysis tools for the large amounts of novel, short-read sequencing data. “I hired first an undergraduate, and then one of Richard’s bioinformaticians, and then I hired a post-doc with a teenage son talented in programming,” he laughed. “Together we cobbled together a database and a browser. That was the start of the tools we have today.” The PGRP grant was instrumental in launching Blake’s academic career, and he soon transitioned from a postdoc to Assistant Professor at the University of Delaware (UD).

THE LONG AND THE SHORT OF IT

Blake’s eye for collaboration and scientific openness is a cornerstone of his laboratory philosophy, which drove several technological advances in sequencing at the beginning of his professorship. He quickly formed a collaboration with UD colleague Pam Green, whose lab was next door. She was interested in short polyadenylated RNAs, in the size range of 100 to 300 nucleotides and she asked about using MPSS to sequence them. However, there was a major problem: the MPSS sequencing reaction initiated from the most 3’ proximal, 4-base DpnII restriction site, which is present in most mRNAs, but potentially absent in shorter 100 to 300 nt RNA. In collaboration with Lynx Therapeutics, they modified MPSS to directly ligate the sequencing adapter directly to the 5’ end of the target RNAs. With this problem solved, they wondered how this modified MPSS method could be used. “Pam and I were reading papers by Jim Carrington. He was out in Oregon and publishing on these tiny RNAs. At least, that’s what we called them,” Blake remembers. The “tiny RNAs” that Carrington was studying are what we know today as small RNAs, typically 21 to 24 nucleotide RNAs that include microRNAs (miRNAs) that silence mRNAs as well as short interfering RNAs (siRNAs) that guide DNA methylation and heterochromatin formation. The short length of MPSS reads was well suited for sequencing these small RNAs, with advantages over Sanger sequencing in terms of depth, so Blake and Pam wrote an NSF SGER grant to apply MPSS to the sequencing of small RNAs. This grant was funded, and their lab members worked hard to develop the method.

With the resulting data, Blake and Pam co-published a seminal 2005 Science manuscript, “Elucidation of the Small RNA Component of the Transcriptome” which was the first “next-gen” sequencing-based analysis of small RNAs, in this case focused on Arabidopsis thaliana  (Lu et al., 2005). Generating more than two million reads, paired with a novel web browser-based method to explore the alignments, this dataset comprised the most expansive and detailed view of small RNAs in any plant, animal, or fungal species at the time. This work demonstrated that many regions of the plant genome yield diverse, numerous small RNAs, with an enrichment around repeats and the pericentromeric region.

CUTTING TO THE NEXT PHASE

Although Blake initially started his lab focused on the molecular genomics of NLR disease resistance genes, his lab had a unique technological advantage in the field of small RNAs – the experience with next-gen sequencing. MPSS wasn’t used by most plant geneticists, who were still favoring microarrays for their comparative ease of use and lower cost. As more genome sequences were released, the Meyers lab began expanding its analysis of small RNAs to rice, maize and other species, even (with UD colleagues) including chicken viruses, analyzing diverse tissues and developmental stages. Blake’s lab has continued to push both the sequencing and phylogenetic depth of sequenced small RNAs in plants, with datasets covering thousands of samples and hundreds of billions of reads (see https://mpss.danforthcenter.org/). Blake has worked to make these data widely available and integrated with other data types, while incorporating new analysis methods into the website. “Not working in the lab anymore, I get my thrills through interacting with the sequencing data. My own computational needs are why we have all these tools on our website,” says Blake.

The big world of small RNAs keeps expanding, too. Connecting his two major fields of interest, disease resistance and small RNAs, Blake’s lab was the first group to demonstrate the targeting of transcripts from NLR genes directly by microRNAs and indirectly through the production of “phased”, short interfering RNAs (phasiRNAs) (Zhai et al. 2011). Their work on phasiRNAs has identified roles in post-transcriptional control of numerous pathways, with much current work focused on understanding the functions and evolutionary history of two genetically-separable pathways that are highly active in premeiotic and meiotic maize anthers (Zhai et al., 2015), a PGRP-funded collaboration with Virginia Walbot’s group at Stanford University. Blake has also advanced the field of small RNA visualization. Together with collaborators Jeff Caplan and post-doc Kun Huang at UD, they are developing sensors and other methods to image and quantify small RNAs at ultra-high resolution in both fixed and live tissues (Huang et al., 2017).

After nearly 14 years at UD, Blake moved his laboratory moved to the Donald Danforth Plant Science Center in 2016. Part of a Missouri initiative to build on historic strengths in plant science, Blake holds a joint appointment at the University of Missouri-Columbia. He has been recognized by several communities for his contributions to the field of disease resistance, small RNAs, and evolutionary biology, and he is an elected fellow of both the American Association for the Advancement of Science (AAAS) and the American Society of Plant Biology (ASPB). He has been a Reviewing Editor at The Plant Cell since 2008, and a Senior Editor since 2017. 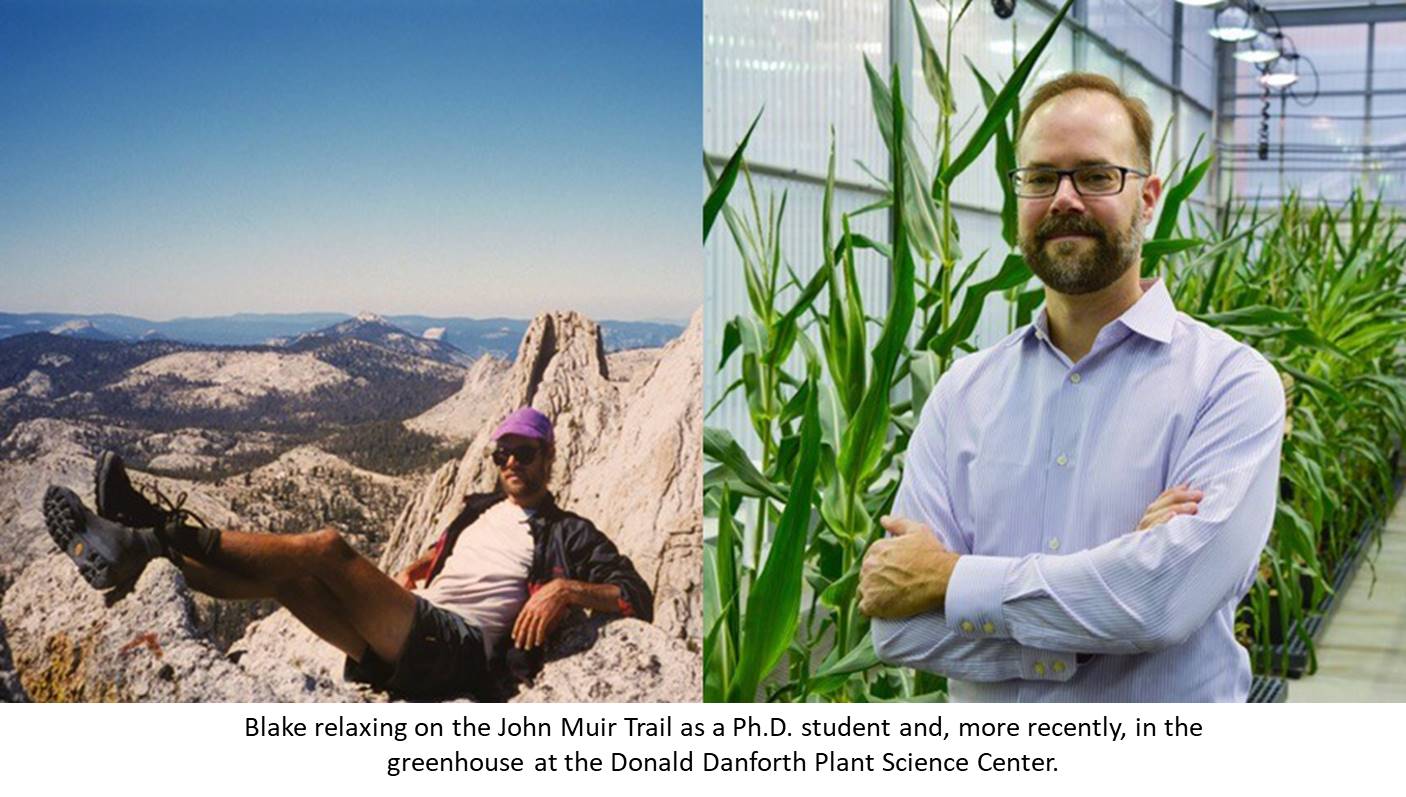