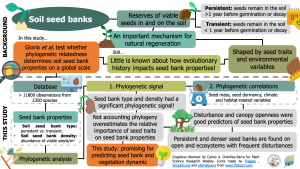 Soil seed banks are classified into two types, depending on how long seeds remain viable in the soil before germination or decay: transient (< 1 year) or persistent (> 1 year). In turn, a species’ ability to form a persistent seed bank presumably depends on seed traits and plant habitat. However, the impact of evolutionary history on seed bank properties has seldom been studied. Here, Gioria et al. build a dataset of 2350 species and test whether seed bank type and the seed density in the soil are shaped by phylogenetic relatedness on a global scale. Also, seed bank properties were correlated with different seed traits and habitat-related variables to assess the relative importance of phylogeny compared to these features. Seed bank type and seed bank density showed a significant phylogenetic signal, meaning that closely-related species tend to share similar seed bank properties. Still, seed mass, seed dormancy, and climate were poor predictors of seed bank properties. Instead, plants that inhabited open and disturbance-prone ecosystems consistently had denser and persistent seed banks. As a result, this fascinating study provides exciting insights into the role of phylogeny on seed bank formation on a global scale and its implications for vegetation dynamics. (Summary by Carlos A. Ordóñez-Parra @caordonezparra) J. Ecol. 10.1111/1365-2745.13437 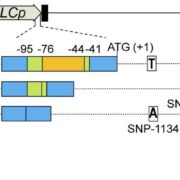 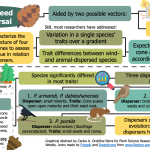 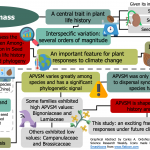