To cope with various abiotic and biotic stress factors, plants must be facile in adapting cellular metabolism. In particular, they have to adjust photosynthesis and balance associated metabolism. Heat and drought stress strengthen plant photorespiration, a metabolic process resulting from Rubisco oxygenase activity (Busch, 2020). Rubisco oxygenase activity results in the production of 2-phosphoglycolate, a toxic intermediate that needs to be rapidly detoxified via the photorespiratory cycle to avoid inhibition of several Calvin-Benson-Bassham cycle enzymes (Fernie and Bauwe, 2020). The interconnection with associated metabolism, in particular the nitrogen cycle, demand a precise regulation of photorespiration depending on the environmental circumstances (Eisenhut et al., 2019). In order to achieve short term regulation of photorespiratory fluxes, the activities of several photorespiratory enzymes are regulated by post-translational modifications, including S-nitrosylation and phosphorylation (Hodges et al., 2016). 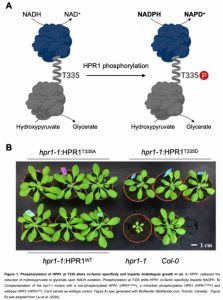 HPR catalyzes the second to last step of photorespiration, converting hydroxypyruvate into glycerate, while reducing a pyridine co-factor, preferentially NADH. In photosynthetic leaves peroxisomal HPR1 accounts for up to 80 % of HPR activity (Liu et al., 2020). The central role of HPR1 in photorespiration is supported by the retarded growth phenotype of the hpr1-1 loss-of function mutant in air (Fig. 1).

Based on previous knowledge of the likely HPR1 phosphorylation site, Liu et al. (2020) demonstrate that mimicking HPR1 phosphorylation at T335 (HPR1T335D) shifted HPR activity towards NADPH-dependency. Speaking in numbers, the catalytic efficiency for NADPH-dependent HPR1 activity was increased by 35 %, while the NADH-dependent activity was reduced by 50 %. Consequently, HPR1T335D was more specific for hydroxypyruvate as substrate for HPR activity in the presence of NADPH (31 % increase) compared to NADH (56 % reduction). Homology based modeling revealed that the position of the phosphorylated threonine residue is within an α-helix connecting the substrate binding- and co-factor binding domain. Structural changes upon threonine phosphorylation can explain the observed effects regarding co-factor- and substrate specificity (Fig. 1).

{Figure 1: Phosphorylation of HPR1 at T335 alters co-factor specificity and impacts Arabidopsis growth in air. A) HPR1 catalyzes the reduction of hydroxypyruvate to glycerate upon NADH oxidation. Phosphorylation at T335 shifts HPR1 co-factor specificity towards NADPH. B) Complementation of the hpr1-1 mutant with a non-phosphorylated HPR1 (HPRF 335A), a mimicked phosphorylation HPR1  (HPR1T3350  )  and wildtype HPR1 (HPR1WT). Co/-0 served as wildtype control. Figure A) was generated with BioRender (BioRender.com, Toronto, Canada). Figure B) was adapted from Liu et al. (2020)}

Indeed, HPR1 phosphorylation negatively influenced photosynthetic CO2-assimilation due to disturbed photorespiration, shown by decreased levels of photorespiratory metabolites (glycerate, glycine and glyoxylate). It remains to be proven, if the reduced levels of photorespiratory metabolite are due to a feedback inhibition of the peroxisomal serine:glyoxylate aminotransferase or reduced chloroplastic export of glycolate via the plastidial glycolate/glycerate transporter 1 (Pick et al., 2013).

The study by Liu et al. (2020) provides evidence for a novel regulatory mechanism within the photorespiratory cycle. In contrast to previous studies that focused on altered enzymatic activity of photorespiratory enzymes upon post-translational modifications, phosphorylation of HPR1 changes co-factor specificity. The shift from NADH towards NADPH for the HPR1 catalyzed step of photorespiration allows the adaptation of photorespiratory fluxes in response to altered environmental conditions that directly influence cellular NADH/ NADPH ratios. Moreover, co-factor switching allows the cell to modulate the peroxisomal NADH/ NADPH ratio by HPR1 activity. However, the advantages of altering co-factor specificity as an adaptive mechanism under changing environmental conditions have to be proven. Further, open questions remain regarding the in vivo functions of the other HPR isoforms (Timm et al., 2011), as well as the regulation of both isoforms in the context of photorespiration. 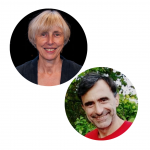 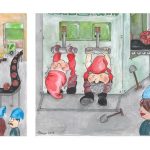 It takes two to tango: two GNOMs have to activate ARF1 together
Scroll to top