Background: One of the most common problems plants have to face is wounding of their leaves, stems and flowers, caused by chewing from herbivores such as butterfly caterpillars. Accordingly, plants have evolved mechanisms to sense and respond to wounding that trigger a complex chain of signaling events, leading to the healing of the wounded area, necessary to avoid uncontrolled water loss and secondary pathogen infections. Plants also use long-distance communication mechanisms, based on hormone biosynthesis and electrical propagation, to initiate the accumulation of anti-herbivore molecules in intact and distant leaves. Overall, the wounding response and its regulation are very complex, involving rapid and slow events, both local and systemic. Despite critical breakthroughs in recent years, how plants orchestrate all aspects of their wounding response is far from understood.

Question: We focused on well-known signaling proteins common to plants and animals, the Mitogen-Activated Protein Kinase family (MAPK), and tested whether they mediated the wounding signal to to allow plants to cope with the imposed damage. We also determined how these MAPKs coordinate with other known elements of wound signaling such as phytohormones.

Findings: Using the model plant Arabidopsis, we simulated herbivore attacks by crushing leaves with forceps. We then measured the activation of various MAPK, as well as the accumulation of stress-related phytohormones in wild type and mutant plants lacking selected MAPK modules. We identified two distinct and independent MAPK modules activated by wounding: the first one is induced within minutes, while the second one takes hours. We also showed that the slow module displays atypical features, notably being under hormonal control to induce the expression of the gene encoding MAP3K, the first step of the module. Finally, we demonstrated that the slow module restricts the growth of a caterpillar when it feeds on plants.

Next steps: A fundamental question that remains is whether our findings in Arabidopsis are conserved in other species, including crops. Another question is the discovery of the targets controlled by the slow module at the cell and tissue levels, and finally how it connects to the generation of long-distance electrical signaling. 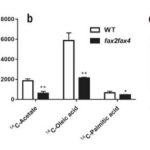