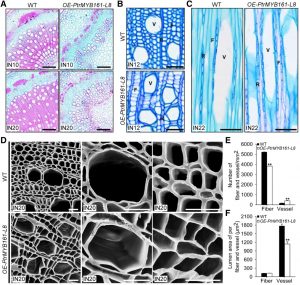 Wood formation is controlled by a number of MYB family transcription factors, which may act as transcriptional activators or repressors. Secondary wall associated NAC domains (SNDs) and vascular-related NAC domains are master regulators controlling the expression of downstream transcription factors, including MYB proteins. There appears, therefore, to be a transcriptional regulatory network (TRN) where activators and repressors function coordinately to establish transcriptional homeostasis for normal growth and development. Wang et al. (10.1104/pp.20.01033) have begun testing a proposed four-level wood formation TRN for wood formation in black cottonwood (Populus trichocarpa). In this model, PtrSND1 transcription factor family members serve as the top-level regulators. In their article, the authors report on their characterization of a particular MYB transcription factor (PtrMYB161) in P. trichocarpa cells and whole plants. PtrMYB161 is a third-layer regulator that directly transactivates five wood formation genes. Overexpression of PtrMYB161 in P. trichocarpa (OE PtrMYB161s) leads to reduced wood, altered cell type proportions, and inhibited growth. An integrative analysis comparing wood cell-based chromatin-binding assays with OE-PtrMYB161s transcriptomics revealed a feedback regulation system within the TRN wherein PtrMYB161, when highly expressed, represses all four top-layer regulators and one second layer regulator. Based on their findings, the authors propose that PtrMYB161 binds to multiple sets of target genes, a feature that allows it to function as an activator as well as a repressor. The balance of the two functions may be important to the establishment of regulatory homeostasis for normal growth and development.

Zones of Defense? SA Receptors Have it Under Control 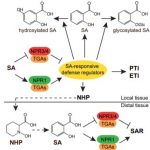 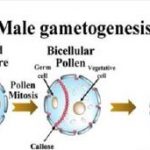