By acting as redox regulatory factor, NADPH-dependent thioredoxin reductase C (NTRC) is involved in many metabolic processes as well as plastid biogenesis. It is the only isoform, out of three, localized to chloroplasts. Arabidopsis thaliana NTRC has been extensively studied in photosynthetic tissues where it plays many important roles. It is involved in chlorophyll and starch synthesis, the Calvin-Benson-Bassham cycle, the abiotic oxidative stress response, non-photochemical quenching, and last but not least, the detoxification of reactive oxygen species (ROS), acting as an electron donor for 2-Cys-peroxiredoxin (Pérez-Ruiz et al., 2006; Kirchsteiger et al., 2009; Pérez-Ruiz et al., 2014; Thormählen et al., 2015; Da et al., 2017; Ojeda et al., 2017). Although the function of NTRC in chloroplasts has been studied for decades, it is only recently that NTRC has also been found to be present in non-photosynthetic plastids (Kirchsteiger et al., 2012). Little is known on the role of NTRC in heterotrophic plant tissues that lack photosynthetic functions and in crop plants. 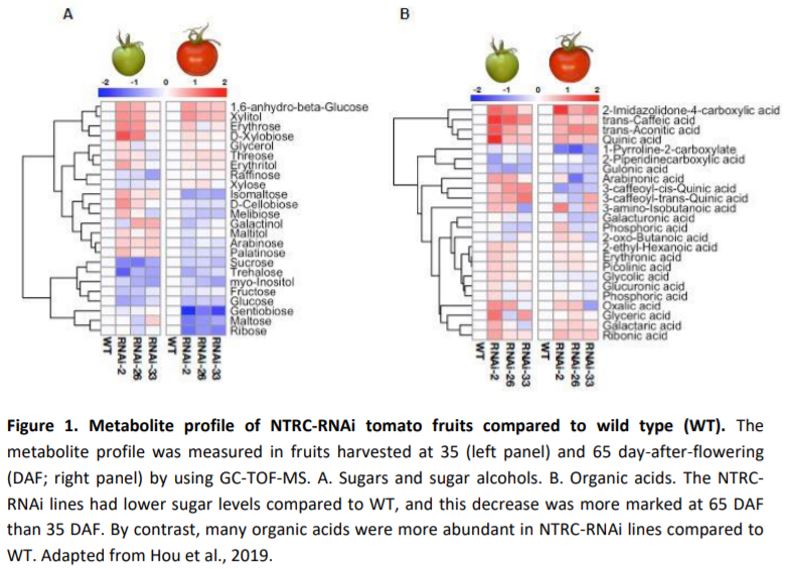 In this issue of Plant Physiology, Hou and colleagues shed light on the role of NTRC in developing tomato fruits using genetic and biochemical approaches (Hou et al., 2019). The authors generated NTRC-RNA interference (NTRC-RNAi) lines under the control of a fruit-specific promoter. With this approach NTRC expression was decreased by 50-75% in developing tomato fruits. The effects of the mutation were analysed in fruits harvested at 35 and 65 day-after-flowering (DAF). Perturbing NTRC expression did not affect the tomato fruit developmental and ripening programs, but caused reduced final fruit size and weight. In fact, fruit colour did not change in NTRC-RNAi lines compared to wild type (WT) at 35 and 65 DAF. Also, neither the chlorophyll content or the protein level of light-harvesting complex II (Lhcb2) significantly changed, and the expression levels of two genes involved in ethylene production and ripening did not significantly differ between WT and NTRC-RNAi lines.

Metabolite profiling performed using gas chromatography-time-of-flight mass spectrometry (GC-TOF-MS) showed decreased levels of soluble sugars (Fig. 1A), while many organic acids (Fig. 1B), amino acids and phenolic compounds increased. Furthermore, in immature fruits NTRC down-regulation resulted in a 50-75% decrease in the level of the transient starch pool, which correlated with a decrease in the redox-activation of ADP-glucose pyrophosphorylase (AGPase) – a key regulatory enzyme in starch biosynthesis – and of its product ADP-glucose. Among the other starch metabolism enzymes analysed, only soluble starch synthase activity was strongly decreased.

Next the authors investigated whether NTRC was involved in controlling the cellular redox homeostasis in non-photosynthetic tissues like it does in photosynthetic plastids. Surprisingly, NTRC down-regulation caused a strong increase in the levels of the reduced forms NADPH and NADH, in mature as well immature fruits, indicating an essential role for NTRC. However, additional work is needed to discover the underlying mechanisms.

In conclusion, Hou and collaborators provide crucial insights on the central role of NTRC in carbon metabolism and redox balance in developing tomato fruits and indicate that NTRC activity is essential to improve fruit growth as well as quantity and quality of tomato yield.

How plants tolerate too-close vegetation – plants get tolerant to other... 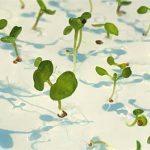 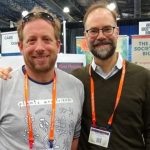