Bacteria use stomatal pores as a point of entry to invade plant leaves. As a first line of defense, plants attempt to counteract this attack by restricting bacterial entry simply by closing the stomata. This happens via reduction in turgor pressure of the two guard cells flanking the stomatal pore, the “double doors” of the entryway, causing the guard cells to become slack and thereby reducing the pore size.

It is well known that this stomatal immunity mechanism in Arabidopsis (Arabidopsis thaliana) occurs when the FLAGELLIN SENSING2 (FLS2) and BRASSINOSTEROID INSENSITIVE1-ASSOCIATED KINASE1 (BAK1) receptor complex recognizes the flg22 moiety (a pathogen-associated molecular pattern, or PAMP) of bacterial flagellin and transmits downstream signals bringing about PAMP-triggered immunity (PTI) (Sun et al., 2013). And, for almost 15 years, it has been recognized that virulent bacterial strains can re-open the stomatal pores as a counter measure to the initial stomatal closure mediated by defense, perpetuating plant invasion by the microbes (Melotto et al., 2006). 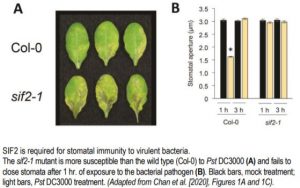 But only now have Chan et al. (2020) identified another plant defense partner to FLS2 and BAK1: STRESS INDUCED FACTOR2 (SIF2). The authors compellingly demonstrate that SIF2 promotes stomatal immunity by interacting with FLS2 and BAK1 to phosphorylate and activate the SLOW ANION CHANNEL1 (SLAC1) protein in the guard cell plasma membrane. Activation of anion channels in guard cells allows anions to leak out, depolarizing the membrane, thereby preventing influx of K+ and the downstream increase in turgor pressure necessary to cause guard cell swelling and stomatal pore opening. Stomatal immunity in plants converges with the well-known abscisic acid (ABA)-mediated pathway classically known to close stomata in response to drought (see Munemasa et al., 2015 for a review), and SIF2-induced stomatal closure is likewise ABA-dependent.

The positive role of SIF2 in stomatal immunity was shown by the finding that as compared to the wild type, the sif2-1 knockout mutant was more susceptible and SIF2 overexpression lines were more resistant to the bacterial pathogen Pseudomonas syringae pv. tomato (Pst) DC3000 (see figure). These phenotypes were observed when plants were surface-inoculated with Pst DC3000 but not when the bacteria were directly delivered into the apoplast, demonstrating the role of SIF2 in preventing pathogen invasion. In epidermal peels exposed to Pst DC3000, rapid stomatal closure occurred in wild-type but not sif2-1 plants (see figure). The sif2-1 mutant was also defective in stomatal closure to ABA and specifically to flg22, but not to chitin and lipopolysaccharide, two other PAMPs, while the wild type displayed stomatal closure in all cases.

Co-immunoprecipitation and bimolecular fluorescence complementation experiments demonstrated that SIF2 not only interacts with FLS2 and BAK1, but also with SLAC1, in an flg22-independent manner. Mechanistically, SIF2 action requires a functional kinase domain, as the wild-type form but not a kinase-inactive form of SIF2 complemented both the immunity and the stomatal aperture phenotypes of the sif2-1 mutant. Indeed, kinase assays and patch-clamp analyses demonstrated that wild-type SIF2, but not the kinase-inactive SIF2, phosphorylated and activated SLAC1. When SLAC1 was mutated to abolish putative phosphorylation sites identified with LC/MS-MS, it exhibited reduced anion channel current. On the other hand, a phospho-mimic mutant form of the SLAC1 protein exhibited constitutive high current and stomatal closure phenotypes. Additionally, ABA induced S-type anion channel currents in the wild type, but not in the sif2-1 mutant. Importantly, while overexpressing SIF2 in the wild type caused constitutive stomatal closure, stomata remained open when SIF2 was overexpressed in the slac1-4 mutant, indicating that stomatal closure by SIF2 requires functional SLAC1.

Taken together, the authors propose a model by which plants fend off bacterial invaders by first sensing bacterial flagellin via the FLS2–BAK1 co-receptor complex, which then activates SIF2 kinase activity that, in turn, phosphorylates the anion channel SLAC1. This last phosphorylation step triggers the outflow of anions, and hence the deflation of guard cells, slamming the doors shut on unwanted guests. 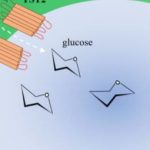 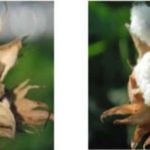 From fuzz to fiber – identification of genes involved in cotton fiber elo...
Scroll to top