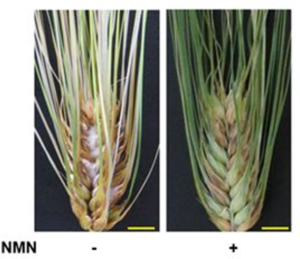 Sci. Rep. Plant defense activators are organic molecules that do not possess antimicrobial activity but have been shown to enhance plant disease resistance mechanisms. A comparison of some Fusarium-resistant and -susceptible barely cultivars suggested that NMN may act as a plant defense activator.

To observe the effects of endogenously produced nicotinamide cofactors, the NMNAT gene – which converts NMN to NAD and represents a bottleneck of the biosynthetic pathway – was overexpressed. NMNAT overexpression was successful in increasing both the endogenous NAD content and plant resistance. Thus, modulation of nicotinic cofactors appears to be a valuable strategy to increase plant resistance to pathogens. (Summary by Elisa Dell’Aglio) Sci. Rep. 10.1038/s41598-017-06048-8

Genomic Insights into the Evolution of the Nicotine Biosynthesis Pathway in...

The Manipulation of Gene Expression and the Biosynthesis of Vitamin C, E and...
Scroll to top