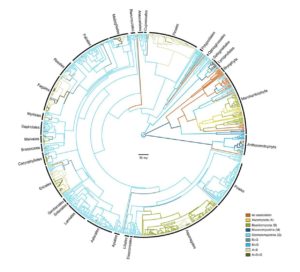 Mutualistic associations between plants and fungi are incredibly widespread, occurring in 90% of extant land plants, and likely are the most ecologically important symbiotic relationships on Earth. Fungi played an integral part in land plant evolution; roots only evolved after early land plants colonised terrestrial environments and these associations allowed for mutualistic exchange of inorganic nutrients and water for carbohydrates in harsh environments predating existing soils. The majority of extant land plants are associated with the Mucoromycota subphylum Glomeromycotina, a division of arbuscular mycorrhizal fungi that penetrate the cortical cells of plant roots for nutrient exchange. Because of this associative abundance together with fossil evidence, it has long been hypothesised that this division of fungi facilitated colonisation of land by early plants. However, a recent study showed evidence that another Mucoromycota subphylum, Mucoromycotina, was likely responsible for enabling the establishment of early land plants, and that Glomeromycotina was a secondary acquisition. This study also revealed that transitions from one fungal phyla to another, such as to species from the Basidiomycota and Ascomycota, or forming symbioses with multiple fungal partners, may have led to unique niche expansions and radiations such as those seen in the orchids, the largest family of land plants on Earth, as well as plants adapted to nutrient poor or acidic soil. The importance of Mucoromycotina in land plant evolution will likely become more apparent as the relationships between mycorrhizal fungi and plants are further explored. (Summary by Danielle Roodt Prinsloo) bioRxiv 10.1101/213090 (Cover illustration by Perry Shirley) 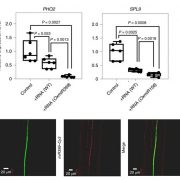 Barriers to integration of bioinformatics into undergraduate life sciences ...