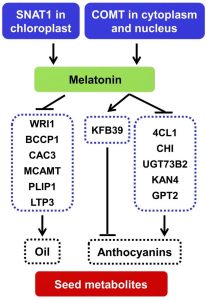 Melatonin is a highly conserved bioactive molecule present in all plant species. It is produced from serotonin through two consecutive enzymatic steps. Serotonin is converted into either N-acetylserotonin by serotonin N-acetyltransferase (SNAT) or into 5- methoxytryptamine by caffeic acid O-methyltransferase (COMT), which are subsequently metabolized into melatonin by COMT or SNAT, respectively. There are two SNAT isogenes, SNAT1 and SNAT2, and a single copy of COMT in the Arabidopsis genome. Melatonin is a potent antioxidant that functions directly against a wide range of abiotic and biotic stresses, including high salt concentrations, heavy metals, high nitrate levels, K+ deficiency, drought, high pH, cold, high temperature, and various pathogens. Melatonin has also been demonstrated to be involved in other aspects of plant growth and development, such as root development, cotyledon and seedling growth, flowering time, and seed yield. As a putative phytohormone, the first identified melatonin receptor, CAND2/PMTR1, was found in Arabidopsis, and the regulation of stomatal closure by melatonin is dependent on this receptor. In addition, exogenous application of melatonin enhances the accumulation of fatty acids in soybean (Glycine max) seeds and increases anthocyanin biosynthesis in cabbage (Brassica oleracea) seedlings. However, the effect of melatonin on seed oil and anthocyanin accumulation in Arabidopsis, an important model system for studying seed lipids and secondary componds, has not heretofore been examined. Li et al. (10.1104/pp.20.00117) now report that (SNAT1) and caffeic acid O-methyltransferase (COMT) genes are ubiquitously and highly expressed and are essential for melatonin biosynthesis in developing seeds of Arabidopsis. They demonstrate that blocking endogenous melatonin biosynthesis by knocking out SNAT1 and/or COMT significantly increased the oil and anthocyanin content of mature seeds. Moreover, the application of melatonin led to a significant decrease in levels of seed oil and anthocyanins. Thus, melatonin functions as a negative regulatory signal for seed oil and anthocyanin accumulation during the maturation of Arabidopsis seeds. 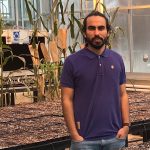