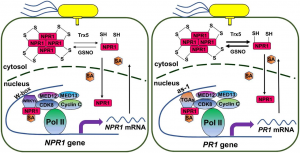 NPR1 (NONEXPRESSER OF PR GENES1) is a master regulator that controls expression of over 2000 genes during plant defense. NPR1 interacts with transcription factors to activate expression of defense genes, but the mechanism is poorly understood. Chen et al. determined that in the presence of salicylic acid NPR1 recruits both CDK8 (CYCLIN-DEPENDENT KINASE8) and WRKY18 (WRKY DNA-BINDING PROTEIN18) to the NPR1 promoter to upregulate its own expression. CDK8 further interacts with WRKY6, WRKY18, and TGA transcription to recruit RNA polymerase II and initiate transcription. NPR1 also binds to other defense gene promoters to recruit its associated transcription factors and therefore RNA polymerase II. CDK8 and its associated Mediator subunits were identified to have a previously undescribed role as positive regulators of immunity for gene expression and systemic acquired resistance. Overall, these results showcase positive regulation by NPR1 on its own promoter and provide more details about the mechanisms of gene activation during plant immunity. (Summary by Katy Dunning @plantmomkaty) Plant Physiol. 10.1104/pp.19.00124 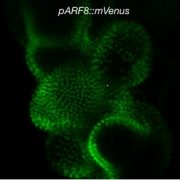 Changes in anthocyanin production during domestication of Citrus 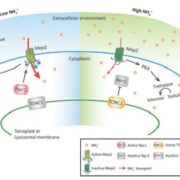 Review: Ammonium as a signal for physiological and morphological responses ($)

The negative effect of a vertically transmitted fungal endophyte on seed longevity... 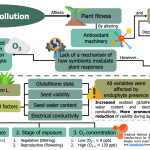 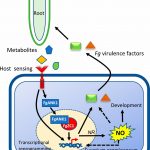