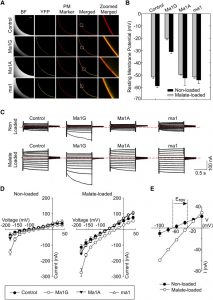 Low fruit acidity in Arabidopsis is strongly associated with truncation of Ma1, an ortholog of ALUMINUM-ACTIVATED MALATE TRANSPORTER9 (ALMT9). Li et al. (10.1104/pp.19.01300) report that both the full-length protein, Ma1, and its naturally occurring truncated protein, ma1, localize to the tonoplast in Nicotiana benthamiana. When expressed in Xenopus laevis oocytes and N. benthamiana cells, Ma1 mediates a malate-dependent inward-rectifying current, whereas the ma1-mediated transmembrane current is much weaker, indicating that ma1 has significantly lower malate transport activity than Ma1. RNA interference suppression of Ma1 expression in various apple calli results in a significant decrease in malate level. Genotyping and phenotyping of 186 apple accessions from a diverse genetic background of 17 Malus species combined with the functional analyses described above indicate that Ma1 plays a key role in determining fruit acidity and that the truncation of Ma1 to ma1 is genetically responsible for low fruit acidity in apple. 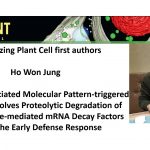 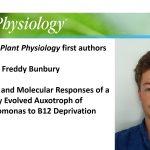