Photosystem biogenesis in the chloroplast requires a concerted effort between synthesis and assembly of components including protein subunits, pigments, and other cofactors that varies both temporally and spatially. Sun, Valente-Paterno et al. (2019) investigate the translation zone (T-zone) of unicellular alga Chlamydomonas reinhardtii (Chlamydomonas) chloroplasts as the primary location for biogenesis of photosystems I and II (PSI and PSII respectively) before redistribution throughout the organelle.

Chlamydomonas shows temporally complex patterns of gene expression for chloroplast biogenesis (Strenkert et al., 2019); the authors sought to determine whether this is also spatially organized. Chlamydomonas cultures were entrained in a diel cycle of 12:12 hour light-dark regime measured in Zeitgeber (ZT) hours. Epifluorescence of three translation markers were analyzed: the psbA mRNA, which encodes a core protein of PSII, the chloroplastic ribosomal protein S-21, and RBP40, a translation factor required for PsbD synthesis. Cells showed patches of enriched signals in the basal region of the chloroplast near the lobe junctions and often in a band of signals extending between these patches. The authors designate this entire region as the ‘T-zone’ in the growing chloroplast (see Figure). These PSII translation markers localize to the T-zone early in the light phase of the diel cycle (i.e. ZT0 to ZT4), but later disperse thereafter (ZT6-ZT10) (see Figure).

To determine whether the T-zone is also the primary location of active translation, the PsbA and PsaA proteins were used as direct markers for PSII and PSI subunit synthesis respectively. This was explored using the mutant y1, which cannot synthesize chlorophyll when cultured in the dark, and consequently lacks PSI and PSII until greening occurs. Only trace amounts of PsbA and PsaA are found in dark-grown y1 cells thus any detected amount upon greening represents newly synthesized proteins and mark their sites of synthesis. Within two or four hours of light exposure of dark-grown y1 cells, the PsbA and PsaA immunofluorescence signals increased in the T-zone before migration into the lobes. This supports that the T-zone is the primary location of newly synthesized PSII and PSI subunits before migration to the rest of the chloroplast.

When does the establishment of T-zone localization of the translation markers occur? Pre-mitotic cells in the dark phase of the diel cycle (i.e. ZT20 and ZT22) had enrichment of psbA mRNA in the basal regions but not specifically localized in the T-zone while S-21 was dispersed throughout the chloroplast excluding the pyrenoid. However, in post-mitotic cells, psbA mRNA and S-21 localized to the T-zone. This indicates that chloroplast translation machinery and mRNAs localize to the T-zone when photosystem subunit synthesis is activated near the end of the dark phase.

Does chlorophyll biosynthesis localize at the T-zone? Epifluorescence microscopy images show protochlorophyllide oxidoreductase (POR), an enzyme in the chlorophyll biosynthetic pathway, dispersed throughout the chloroplast in ZT2 cells. In ZT4 and ZT6 cells, it becomes localized to the T-zone; this coincides with the accelerated increase in chlorophyll levels observed at ZT5 in parallel to increases in levels of PSI and PSII. This was further explored using the mutant y1 cells as they begin greening without chlorophyll and then accumulate it as greening progresses (Ohad et al., 1967). Sun, Valente-Paterno et al., found POR co-localized with S-21 in the T-zone of dark-grown y1, as well as after illumination in consequent greening stages. Weak autofluorescence was observed in dark-grown y1 cells due to the lack of chlorophyll. Upon one to three hours of greening, the strongest chlorophyll fluorescence was seen in the T-zone. These results suggest that the T-zone is the primary location of chlorophyll biosynthesis.

The T-zone represents discretely localized region of photosystem mRNA and proteins at temporally relevant times alongside chlorophyll biosynthesis within the chloroplast of Chlamydomonas. Sun, Valente-Paterno et al. therefore reveal this as an important hub of photosystem biogenesis. 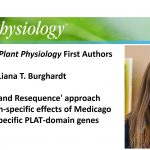 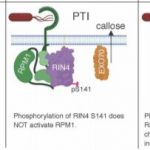