When your fort is under attack during battle, and the wall is breached, you can choose to fight, flee, or forgo. Plants, on the other hand, are left with little choice: they must fight. Winning any battle, though, depends on a multitude of factors, most notably your available arsenal, soldiers, and importantly, your defense strategy. Similarly, plants must make use of these factors when confronted with a breach of their cell walls by pathogens, and hope that this is enough.

When a spore of the barley powdery mildew fungus Blumeria graminis f. sp. hordei (Bgh) attempts to penetrate an epidermal cell of Arabidopsis (Arabidopsis thaliana), the non-host plant unleashes its first line of defense to resist Bgh takeover: the formation of a unique plant cellular structure, called a papilla, which has to be seen to be believed (check out Assaad et al. [2004] for some impressive microscopy images). Papillae are located between the cell wall and the plasma membrane (PM) of the plant cell, and contain lots of exosomes—extracellular vesicles that have been secreted by the plant cell—thought to carry an arsenal of molecules capable of effecting fungal growth inhibition. 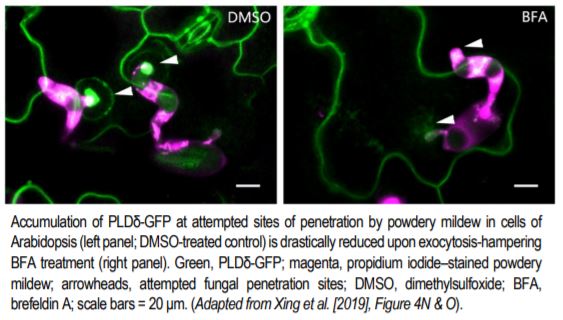 But how does this structure form, and what regulates its formation? A recent study by Xing et al. (2019) provides key insights into these questions. Previous studies have shown that phosphatidic acid (PA) serves as a signaling lipid that promotes plant immune responses, and that phospholipase D enzymes (PLDs), which hydrolyze structural phospholipids, generate PA (for a review, see Zhao, 2015). Xing et al. (2019) found that the PM localization of PLDδ tagged with green fluorescent protein (PLDδ-GFP) showed strong accumulation at the papillae where Bgh had attempted penetration (see figure), and also increased in abundance throughout the PM when treated with chitin, a fungal elicitor of pathogen-associated molecular pattern–triggered immunity in plants. Coexpression analysis together with Förster resonance energy transfer–fluorescence lifetime imaging microscopy of PLDδ-GFP and AtREMORIN1.3-mCherry suggested that PLDδ-GFP localizes to sterol-rich microdomains (or lipid rafts) of papillae, and that PLDδ accumulation increases in response to chitin treatment. Disruption of sterols using methyl-β-cyclodextrin also suggested that without the lipid rafts, PLDδ cannot be efficiently recruited.

Chitin-treated plant cells also had a higher density of PLDδ-GFP, and a faster recovery of PLDδ-GFP signal upon fluorescence recovery after photobleaching, as compared to those that were untreated. This fluorescence signal recovery was likely due to rapid replacement of the PLDδ-GFP at the PM by brefeldin A–sensitive exocytotic vesicles (see figure), rather than by lateral movement from adjacent areas of the PM. Support for this hypothesis was gleaned from the finding that chitin treatment increased the interaction of PLDδ with PEN1, a syntaxin protein that enhances penetration resistance and that works in concert with VAMP721/722 SNARE proteins in secretion. Not surprisingly, then, PLDδ-GFP localization to papillae decreased in vamp721/722 mutants. And, just like pen1 and vamp721/722 mutants, the pldδ mutant plants were more susceptible to Bgh, had lower accumulation of PA, and lower levels of hydrogen peroxide, jasmonic acid, and defense-related gene expression upon chitin treatment.

So in this particular battle between the Bgh fungus and the non-host Arabidopsis plant, the plant’s defense strategy to combat its fungal enemy’s attempt at penetration involves an arsenal and soldiers, and a secret weapon, PLDδ, which collectively reside in and on exocytotic-vesicle “ships”; but that alone will not work. The lipid rafts must direct these ships to their proper locations near the breach in the cell wall, at the papilla. Then, and only then, can the PLDδ be properly deployed to unleash the PA signal. With this defense strategy, the plants win the battle, but will they win the war…? 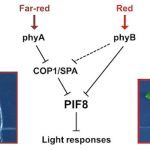 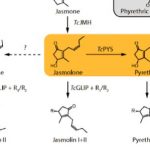 Pyrethrin biosynthesis: From a phytohormone to specialized metabolite
Scroll to top