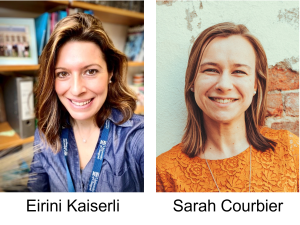 A native of Kos, Greece, Eirini studied in the UK at the University of Glasgow, earning a degree in biotechnology and, later, a PhD investigating the function and localization of the first genetically encoded UV-B receptor, UVR8. Eirini went on to research phototropins and worked in the lab of Prof. Christie before moving on to a postdoctoral fellowship at the Chory lab at the Salk Institute for Biological Studies in California. In 2013, she established her own lab at the University of Glasgow after receiving a Lord Kelvin Adam Smith Fellowship.

Eirini’s research focuses on understanding how environmental stimuli induce changes in nuclear architecture, chromatin organization, and gene expression to regulate plant growth and development. In particular, she is interested in elucidating the molecular function, composition, and physiological significance of the light-regulated nuclear body complexes in plants using a multidisciplinary approach.

Sarah: Tell me about your experience as a member of the editorial board of Plant Physiology.

Eirini: I have been part of the editorial board for approximately 5 years now. At the time, Prof. Mike Blatt, who I have known for years, was Editor-in-Chief of Plant Physiology and suggested that I join the editorial board of the journal. It is a good opportunity to meet people and read papers, but also get to a position where you need to make decisions that can benefit science. Even though I was new in the American Society of Plant Biologists (ASPB) community, everyone was very welcoming and helpful from day one. I could always get help from monitoring editors and the staff of Plant Physiology; they are fantastic. I am really happy to be part of this community.

S: What got you into plant sciences?

E: When I was a child, I was already very interested in nature, I wanted to become a marine biologist and study orcas in the wild. In Greece, it is very difficult to follow a career in research, but this is something I wanted to do, so I decided to leave the small island where I grew up, although I did not really know what research was about. From there, I went to Glasgow. I had never been abroad before so it was a challenging, yet fantastic and rewarding experience. Studying in the UK is not very common for someone from Greece but English is taught at school and the UK has an excellent academic reputation.

At the University of Glasgow, I had fantastic lectures and lab practicals. During the third year of my undergraduate degree, I attended a guest seminar by the late Prof. Winslow Briggs, who talked about the newly discovered blue light receptor kinases. It was all so exciting and new, and I told myself, “I wish I could work on a project like this!” As a student at Glasgow University, I had the opportunity to apply for the work placement scheme and carry out a one-year research project. Most people would go to industry, but I immediately contacted Winslow. It took a few emails to get a reply and I had to apply for several funding bodies, notably the Gatsby foundation, which promotes young plant scientists. It was challenging to organize, but I made it there and it opened my eyes and expanded my scientific horizons. I was completely hooked on plant photobiology and plant physiology. I was fortunate to have a role model like Winslow at such an early stage. In addition, having a Sainsbury undergraduate studentship from the Gatsby Charitable Foundation allowed me to meet life-long mentors, interact with renowned scientists in plant biology, be part of a network, and connect with other students with common interests. This is how it all started for me. Of course, once you are exposed to all these stimuli, you can make decisions on your PhD and postdoc, but it was all down to these initial experiences.

S: As an early career scientist, did you encounter challenges, and how did you overcome them?

E: I had amazing supervisors, mentors, and peers, and I never felt different nor disadvantaged because I was a woman or from another country. I always wanted work at research labs where I admired the PI and the work from the lab. I remember when I first thought about working as a postdoc at Prof. Joanne Chory’s lab, someone remarked, “Are you sure you are good enough to go there?” I never thought about this because for me, being interested in a research area is the most important thing. Do your best, no matter how intimidating a new environment might seem. Of course, when you go to a famous lab, there are ambitious scientists and you may feel nervous, but I think it contributes to character building and drives you forward. Try to learn from more experienced colleagues and become a better scientist and a better person.

S: What are/were the key influences in your career?

E: One is definitely to be part of the Gatsby community. Knowing that you have support from mentors and a whole network of peers is great. Also, being part of the Stanford and Carnegie community as an undergraduate visiting student in 2003, with fantastic role models (such as Dominique Bergmann) was intellectually stimulating.

S: Which scientist(s) inspire(d) you most?

E: Winslow Briggs and Joanne Chory, mostly for their attitude toward science that I tried to absorb. Winslow was always excited about new findings from his own lab or other labs he interacted with. It could be anything. He was so excited about science and his curiosity was very contagious. He always used to come down to the lab to check what was going on and would treat professors or undergraduates, like me at the time, in exactly the same manner. That was wonderful.

As for Joanne, who is an exceptional scientist and a remarkable woman, I admire her strength and research integrity. She is a true inspiration. One piece of advice was, “try not to spread yourself too thin” in terms of projects. If you want to dissect a whole pathway, you need to understand every single detail of it. I think that is why she is so successful. Do not make excuses; you just need to do the work.

S: Was the role of PI what you expected?

E: After talking to people already holding PI positions, I had a relatively clear idea of what an academic job entails. I am very grateful to my PhD supervisor, Prof. Gareth Jenkins for allowing me to be very independent at an early stage. Also, by working as a postdoc in a big group, you have to supervise students, which you also do as a PI, so this indirectly equips you with some management skills. However, overseeing projects and supervising researchers is always a great responsibility. One thing I did not anticipate is the bureaucracy and I wish I had more time to be in the lab. Although, if you really want to, you find ways to still connect with science. During my PhD, I remember that Prof. Mike Blatt would often setup electrophysiology experiments and always make time to walk in the confocal imaging room and ask, “How is everything?” Until just before the pandemic, I was still very hands-on in the lab and would train people or help with troubleshooting. Now, I fear (or maybe I should look forward to) when the time comes and I have to ask people in my lab how an assay was performed and walk me through data based on techniques that I am not familiar with.

S: Do you have a favorite discipline, technique, or experiment in the lab?

E: Cell biology, since I started using a confocal microscope I was really drawn by visualising subcellular structures in living cells. It is truly remarkable. I always try to fit in some time in my agenda to help people with imaging at the confocal. I am fascinated by nuclear body structures, although I did not believe in them until I saw them and worked on them. Cell biology is an area where it is difficult to get funding but now, we have state-of-the-art techniques to answer some old questions, such as, “what is happening in these light-regulated nuclear bodies?” There are many excellent recent publications showing that this might be regulated via liquid-liquid phase separation.

I am also interested in nuclear events and chromatin organization. This is a revolutionary technique that would reveal “who interacts with who” within these spaghetti-like DNA structures. Understanding how these chromatin organization changes occur to trigger gene expression in response to stimuli is something I would like to investigate further.

S: What is the best advice you were given by friends, peers, or family?

E: When I was a PhD student thinking of the next step as a postdoc, I knew that I wanted to stay in photobiology but was not sure whether I should change a research topic to experience new techniques and systems. At the time, a mentor said to me, “There are 3 things you can change: the location/country, the research theme, and the organism you study. It is good to change one of the 3 during each transition, but it becomes challenging if you change 2 or 3 at once.” This was great advice and I think that applies for any transition, for example from PhD to postdoc and even from postdoc to PI. Choosing a profession that sparks your curiosity and allows you to grow as a person is something my parents always encouraged me to do and I am grateful for.

S: What would be your advice for early career scientists who want to pursue in academia?

E: Stay enthusiastic! Retaining and maintaining your enthusiasm and curiosity is key. Also, try to identify good mentors. They could be your direct supervisor or simply someone you trust and value. Relationships with peers is important to maintain, too. It is through collaborations that you get inspiring moments and foresee areas where you can expand. Do not be intimidated to pursue competitive opportunities (positions, fellowships). If you want something, just go for it! Moving countries and going places were you admire the research lab definitely contributes to your career, your decision, and to making you a better scientist. Finally, I feel very lucky to have the privilege to be scientist. Being free and open to perform experiments, discuss ideas and novel findings is how you can contribute to global knowledge and discover opportunities you did not know that existed.

S: If not a plant biologist, what would you have become?

E: In high school, I knew that biology was a discipline I was interested in and wanted to pursue. But when I was younger, I wanted to become a carpenter (as I loved the smell of wood and the beautiful patterns you could create), a horse-riding trainer or a marine biologist. The latter was inspired by Jacques-Yves Cousteau documentaries as well as my grandfather, who was a fisherman, and my dad, who introduced me to sea creatures through snorkeling and sailing. 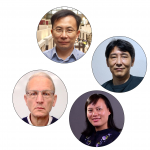 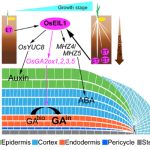