Xiong et al. explore the action of plant hormones that control how rice seedlings emerge from the soil http://www.plantcell.org/content/29/5/1053

Flowering plants begin their life cycle as a seed beneath the soil surface. With adequate water and the right temperature, the seeds germinate and seedlings develop. In rice and other grasses, a sheath called the coleoptile protects the leaves of the emerging shoot. Below the coleoptile, a short stem called the mesocotyl develops in the dark and pushes the base of the coleoptile toward the soil surface. The elongation of these organs is regulated both by genetic and environmental factors that stimulate the emergence of rice seedlings. 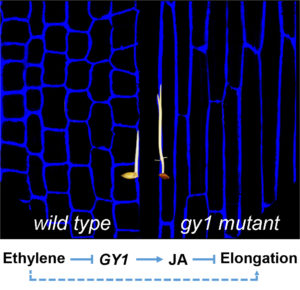 The gaseous plant hormone ethylene is known to play an important role in promoting seedling emergence from the soil. Ethylene production is induced if rice seedlings are covered with soil, and this causes elongation of the mesocotyl and coleoptile. We would like to know how ethylene works in this process: what is happening inside the plant that leads to elongation of these parts of the shoot and emergence from the soil? We found that ethylene works together with another plant hormone, jasmonic acid (JA), to control elongation and promote the emergence of rice seedlings from the soil.

We identified a rice mutant, called gaoyao1 (gy1), that has an abnormally long coleoptile and mesocotyl (gaoyao is a Chinese name for “high waisted”), and cloned the gene, called GY1, responsible for these mutant characteristics. We found that GY1 encodes an enzyme that acts at the first step in the biosynthesis of the plant hormone jasmonic acid (JA). This shows that JA normally inhibits the elongation of rice seedlings, since knocking out GY1 function in the gy1 mutant led to the abnormally long shoots. During rice seedling emergence, ethylene production increases and JA content decreases. Our work shows that ethylene signaling inhibits the action of GY1, thus suppressing the biosynthesis of JA and promoting seedling elongation.

Interestingly, although the mesocotyl and colepotile of the gy1 mutant are already abnormally elongated, we found that supplying ethylene to mutant seedlings promoted even further elongation, suggesting that ethylene may also act on shoot elongation through another pathway that is independent of GY1. Future research will focus on uncovering additional factors that work with ethylene to affect the emergence of rice seedlings.