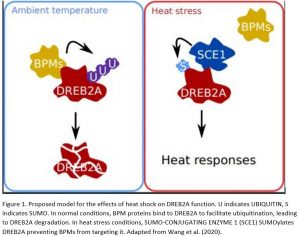 Within a genetic signaling network, some genes may act as hubs, like a subway station where multiple lines cross. Such shared signaling genes between networks can lead to interactions between responses to different stimuli and, in the case of stress responses, can allow cross-tolerance between alternative types of stress (Nakashima et al., 2014).

The transcription factor DREB2A is an important signaling hub, integrating abiotic stress information about two distinct abiotic stresses: drought and heat stress. In response to either of these abiotic stresses, DREB2A transcription increases (Liu et al., 1998; Sakuma et al., 2006b). In turn, DREB2A binds to dehydration-responsive elements (DREs) in the promoters of a range of genes, upregulating their expression. Those that are activated include a number of drought stress-related genes, such as those encoding LATE EMBRYOGENESIS ABUNDANT (LEA) proteins and dehydrins, but also heat shock-related genes, such as HEAT SHOCK PROTEIN 70 (HSP70) (Sakuma et al., 2006a; 2006b). The evolution of the overlapping expression of these downstream genes is likely due in part to shared requirements during both heat and drought stress for protective functions. For example, proteins must be prevented from unfolding, membranes stabilized and harmful reactive oxygen species scavenged (Bowne et al., 2011). Given the essential role of DREB2A in multiple stress responses, it is important to understand how the protein regulates gene expression.

The stability of DREB2A protein is key to its mechanism of action as, in non-stress conditions, it is rapidly degraded by the 26S proteasome. Wang et al. (2020) have now investigated how DREB2A is stabilized during heat shock. They found that a post-translational modification of a specific negative regulatory domain within the DREB2A protein prevents it from being degraded. Targeted deletion of the negative regulatory domain produces a constitutively active form of the protein with greater stability (Sakuma et al., 2006a). Plants over-expressing the constitutively active DREB2A show increased tolerance to drought and heat stress, though plant growth is also stunted (Sakuma et al., 2006a, 2006b).

Because heat shock results in large-scale SUMO (SMALL UBIQUITIN-LIKE MODIFIER) conjugation to a range of nucleus-localized proteins (Miller et al., 2010), Wang et al. (2020) suspected that DREB2A might also be SUMOylated. They found that DREB2A weakly interacts with a SUMO-conjugating enzyme and that DREB2A is SUMOylated when heterologously expressed in bacteria (Fig 1). Using site-directed mutagenesis, the authors modified a lysine residue within DREB2A’s negative regulatory domain. They found that SUMOylation was abolished in this version of the protein. Furthermore, though both the wild type and modified version of DREB2A were degraded under ambient temperature, only the lysine-modified version was degraded at high temperature. These data suggest that SUMOylation of DREB2A is required to maintain protein stability specifically at high temperature (Fig 1).

Previous work found that BTB/POZ AND MATH DOMAIN PROTEIN 2 (BPM2) is required for the 26S proteasome to degrade DREB2A (Morimoto et al., 2017). BPM2 is thought to recognise and bind to protein substrates and guide them to relevant ubiquitination machinery (Gingerich et al., 2005). Once ubiquitin is added, the protein is earmarked for degradation by the 26S proteasome. Wang et al. (2020) confirmed that BPM2 interacts with the negative regulatory domain of DREB2A but that this interaction is abolished when the domain is fused to a SUMO protein. Additionally, the stabilized version of DREB2A, incorporating the mutated lysine that prevented SUMOylation, exhibited stronger interaction with BPM2. These findings suggest that SUMOylation of DREB2A partially prevents BPM2 from facilitating ubiquitination and subsequent degradation (Fig 1).

The authors have demonstrated the importance of post-translational modification for stimulus-specific protein stability. Previous research had found that phosphorylation of DREB2A may also be important for its stability (Mizoi et al., 2019). During non-stress conditions, the negative regulatory domain is phosphorylated and the protein is degraded. Phosphorylation of newly formed DREB2A proteins is inhibited during heat stress and reduced phosphorylation of DREB2A correlates with increased protein stability (Mizoi et al., 2019). It remains to be seen whether phosphorylation status relates to the ability of DREB2A to be SUMOylated or if these processes are independent. While both involve post-translational modification of the negative regulatory domain, so far different residues within the domain have been found to be involved in each process.

Many questions on this topic still remain. For example, it is unclear whether post-translational modifications are also actively removed from DREB2A and the extent to which DREB2A stability is similarly regulated by drought stress. Wang et al. (2020) have identified a key mechanism by which heat-stress responses are mediated within plants. This is important to understand the impact of changing environmental conditions on plant growth and will provide insight into developing methods to create more heat- or drought-tolerant plants.

Nakashima K, Yamaguchi-Shinozaki K, Shinozaki K (2014) The transcriptional regulatory network in the drought response and its crosstalk in abiotic stress responses including drought, cold, and heat. Frontiers in Plant Science, 5: 170 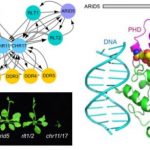 Remodeling Chromatin in an ARID Environment
Scroll to top