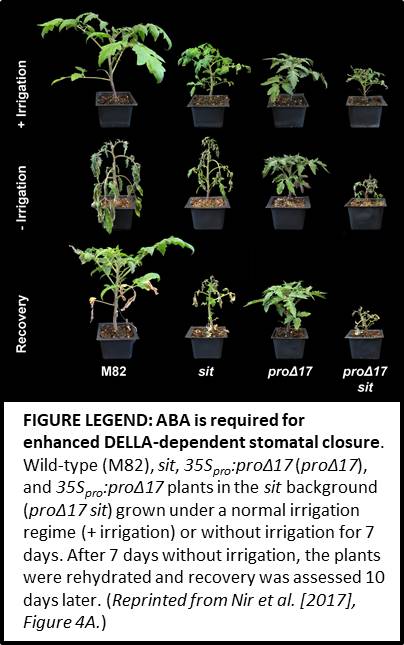 By combining rigorous physiological studies in tomato with genetic/misexpression analysis, Nir et al. (2017) were able to do just that. Conveniently, unlike Arabidopsis thaliana, which contains five DELLA genes, tomato has only one, PROCERA (PRO). The authors measured daily weight loss (i.e., transpiration) in the pro mutant, finding that its transpiration rate was elevated, leading to rapid wilting in response to water stress. Transgenic tomato plants overexpressing mutant S–della protein, which cannot form a complex with GID1-GA and is therefore stable in the presence of GA (35Spro:pro∆17 plants), showed the opposite phenotype. The stomata of these plants were more responsive to water stress than wild type, as they closed at a higher relative soil water content, and stomatal pore area was reduced under both normal and water-deficit conditions. Moreover, the 35Spro:pro∆17 plants were smaller than wild type. The authors then expressed S–della in the ABA-deficient sitiens (sit) mutant background. Although the resulting plants were smaller than both wild-type and 35Spro:pro∆17 plants, the effects of the constitutively expressed S-della protein on stomatal aperture and water loss were greatly reduced (see figure); 35Spro:pro∆17 sit plants wilted much more rapidly than the others due to their widely open stomata. These findings indicate that the effect of PRO on stomatal aperture is dependent on ABA. In addition, it appears that PRO’s effect on plant size is not linked to its effect on stomatal closure.

While ABA levels did not significantly differ among wild-type, pro, and 35Spro:pro∆17 leaves, the sensitivity of guard cells in epidermal peels to ABA did differ: these ABA responses were strongest in 35Spro:pro∆17 and weakest in pro. Moreover, when S-della was expressed specifically in guard cells, plant growth was not affected, but stomatal sensitivity to ABA increased and water loss decreased. These findings suggest that PRO increases the guard cell’s sensitivity to ABA, perhaps by upregulating the expression of specific ABA-receptor genes, although this intriguing hypothesis awaits further analysis. It now appears that PRO and GA regulate guard cell closure in response to drought stress in a manner independent of their effects on plant growth, a longer-term response to drought. Perhaps this study will open the floodgates for other investigations that combine physiological and genetic approaches in clever ways to address crucial questions.