Molin et al. describe the sequence and gene organization of an extrachromosomal circular DNA element, the eccDNA replicon, that confers resistance to the herbicide glyphosate in amaranths. The Plant Cell (2020) https://doi.org/10.1105/tpc.20.00099 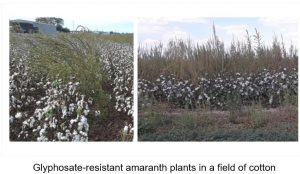 Background: The first genetically modified crops were introduced in 1996, with resistance to the herbicide glyphosate, commercialized as Roundup. This product changed agriculture by reducing herbicide usage to predominantly one product, targeting weeds during their most susceptible stage, and allowed further expansion of conservation tillage. It was amazing: the land was prepared, the crop was planted, the whole field (including weeds) was sprayed and the weeds died, but the resistant crop did not. It worked well for 10 years until Roundup-resistant weeds began to appear in sprayed fields, much like bacteria become resistant to an antibiotic. Now, older herbicides had to be re-introduced to control resistant weeds. One such resistant weed, pigweed (Amaranthus palmeri), was very prolific and aggressive, and spread to 27 states in the US, becoming a real threat to our agriculture.

Question: What changed in the pigweed genetic makeup that made it resistant to Roundup? Early evidence indicated that Roundup-resistant pigweed had developed the capacity to make more copies of the gene that roundup targets, but how?

Findings: The pigweed DNA from resistant plants had formed a very large, self-replicating and circular DNA, called the replicon, in addition to its normal chromosomes. The replicon carries the gene that encodes the protein attacked by Roundup, and makes high levels of the protein. This circular DNA also contains the elements that control its regulation and replication without interfering with cellular processes. Interestingly, human cancers can have circular DNAs that encode tumorigenesis genes that make tumors more aggressive. The pigweed circular DNA can be passed on to subsequent generations and proliferate in populations sprayed with Roundup. This report of a massive circular DNA appearing in response to external applied stress explains how weeds can evolve and adjust in response to human activity.

Next steps: We want to isolate and characterize this circular DNA, and use this information to engineer synthetic replicons to rapidly improve crops by expressing beneficial traits outside the nuclear genome.  This would circumvent some issues of conventional genome engineering and provide a more rapid delivery of improved crop traits to farmers to help feed the world. 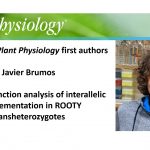 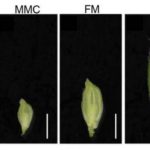