Fatty acid synthesis is a ubiquitous pathway in both prokaryotes and eukaryotes. Plants synthesize fatty acids for a variety of uses including membrane bilayers and seed energy reserves, but also for the production of lipoic acid, which is a cofactor for some enzymes. The multi-step biosynthetic process is catalyzed by the multi-protein fatty acid synthase (FAS) enzyme system. Type I FASs are mainly found in animals and fungi, whereas type II FASs are predominant in bacteria and plants (White et al., 2005).

Plants have fatty acid synthase systems in plastids, the endoplasmic reticulum and mitochondria. Plastid-localized Type II fatty acid synthases (ptFASs) mainly produce fatty acids that are needed as cellular lipid building blocks. By contrast, the mitochondrially-localized Type II fatty acid synthase system (mtFAS) uses malonic acid as a substrate to generate lipoic acid precursors, a cofactor in many enzyme complexes (Guan and Nikolau, 2016). Acyl carrier protein (ACP) is an essential cofactor protein for FAS. As the name suggests, ACP carries acyl intermediates between catalytic sites of the FAS systems (White et al., 2005). This activity cannot be achieved unless the protein is in an active holo form via post-translational attachment of a 4′-phosphopantetheine moiety to a conserved serine residue in a DSLD motif (Lambalot et al., 1996). There are eight ACP isoforms in Arabidopsis, five of which are localized in plastids and three of which are predicted to be in the mitochondria (Mekhedov et al., 2000). While certain enzyme components of the mtFAS system have been characterized before, little is known about the genes encoding mtACP.

In this issue of Plant Physiology, Fu et al. (2020) report an in-depth analysis of the three genes encoding mtACP and elucidate their functions and physiological importance. Phylogenetic analyses revealed that mtACP1 (At2g44620), mtACP2 (At1g65290) and mtACP3 (At5g47630) are evolutionarily distant from the five ptACPs, with just 33–42% similarity between the sequences. However, the DSLD motif that contains the phosphopantetheinylated serine residue is conserved amongst all eight ACPs. Subcellular localization of GFP-fused mtACP1-3 confirmed the in-silico predictions, that these genes are localized to the mitochondria. qRT-PCR analysis revealed that mtACP1 and mtACP2 are both expressed 10–50 times higher than mtACP3. Unlike mtACP1 and mtACP3, which have minimum variation in expression in most tissues, mtACP2 has highest expression in flowers and lowest in young seedling leaves.

Mutant analysis revealed that none of the single mutants had a change in biomass or morphological appearance or a compensatory higher expression of the other ACPs. However, the absence of any mtACP isoform is embryonic lethal, demonstrating that mtACPs are needed for plant embryogenesis. This corresponds with a recent observation that mutations in the gene encoding phosphopantetheinyl transferase, the enzyme that activates mtACP, also results in an embryo-lethal phenotype (Guan et al., 2015). Therefore, to investigate the functions of the mtACPs, analysis of the viable, but growth-affected mtacp1 mtacp2 double mutant was carried out.

One of the products of mitochondrial FAS is octanoate, a precursor for lipoic acid (Gueguen et al., 2000), which is a cofactor for several enzyme complexes, such as pyruvate dehydrogenase (PDH), α-ketoglutarate dehydrogenase (KGDH), branched-chain keto acid dehydrogenase and glycine decarboxylase (GDC). In the double mutant, the H subunit of GDC, and E2 subunit of mitochondrial PDH and KGDH had markedly reduced lipoylation compared to wild type. GC-MS further revealed a high accumulation of glycine in 16-d-old mtacp1 mtacp2 compared to wild type, suggesting that the reduction in lipoylation of the glycine-catabolizing enzyme GDC leads to an increase in glycine levels in the mutant.

During photorespiration, byproducts of the rubisco oxidation reaction are processed in the mitochondria.  GDC is one of the enzyme complexes involved in this process. It consists of four components, H, T, P and L, of which component H is lipoate dependent (Guan et al., 2017). To investigate the extent to which photorespiration affects the abnormal phenotype of the mtacp1 mtacp2 double mutant, plants were grown in 1% CO2 or 2% sucrose, conditions that minimize photorespiration. Metabolomic comparison showed that these growth conditions led to a decrease in glycine levels, and other metabolites were near wild-type levels. The growth phenotype of the double mutant plants was also partially rescued in elevated CO2. Perhaps the decreased lipoylation status (therefore activity) of PDH and KGDH is responsible for the incomplete recovery of the mutant, since their effects are not photorespiration dependent.

In summary, Fu et al. characterized the functional and physiological roles of mtACP, and highlighted the important contribution of the mitochondrial fatty acid synthase system in the generation of lipoic acid and its effects on other enzyme systems, revealing critical roles in embryogenesis and photorespiration. 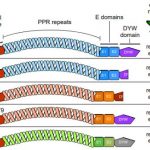 Plants (RNA) Editors: Testing for Conservation in RNA Editing in moss and a...
Scroll to top