Ornamental grasses with a sprawling growth habit may be welcome in the garden, but grasses such as maize (Zea mays) give the highest yields when they exhibit upright leaf architecture, allowing them to be planted at high density while maximizing their exposure to sunlight. The maize leaf is composed of a stem-gripping proximal sheath and a long distal blade joined together by an auricle and membranous ligule. This hinge-like region allows the blade and supporting midrib to bend away from the stem, thereby affecting plant architecture and yield. Extensive analyses of liguleless (lg) mutants have shed light on the roles of lg genes in establishing the blade­–sheath boundary (e.g., Johnston et al., 2014, but their downstream targets remain largely unknown. 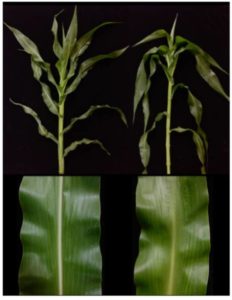 A search for new maize mutants with altered leaf architecture led Strable et al. (2017) to discover another highly informative maize mutant, drooping leaf1 (drl1). The leaves of drl1 droop downward due to reduced midrib development and exhibit increased leaf angle due to distal extension of the auricle along the blade–sheath boundary. In addition, drl1-R (the reference allele of drl1) has shorter, narrower leaf blades and longer proximal sheaths than wild type, as well as long, slender internodes. These phenotypes are especially pronounced in the presence of the unlinked genetic modifier drl2-Mo17. Transposon mutagenesis led to the discovery of a second allele of drl2, which interacts synergistically with drl1 (see figure) in a dose-sensitive manner. The maize drl1 and drl2 loci encode CRABS CLAW-like transcription factors in the YABBY family (Bowman and Smyth, 1999). YABBY genes (named after an Australian crayfish) play important roles in leaf lamina development in several eudicot and monocot species, but their role in maize has been unclear, although Juarez et al. (2004) suggested they help direct leaf blade outgrowth.

The phenotypes observed in drl1 and drl2 suggest that these genes control agronomically important leaf and stem architecture traits. The authors probed this association using data from the field. Specifically, they performed genome-wide association studies using a nested association mapping population (NAM) of ~5000 recombinant inbred lines to determine whether the drl1 and drl2 loci co-localize with agronomically important quantitative trait loci (QTL). Analysis of the association of SNPs (single nucleotide polymorphisms) with previously generated phenotypic data arising from natural variation in the NAM population indicated that drl1 and drl2 are indeed located in important QTL regions for stem and leaf traits and that several rare SNPs have large phenotypic effects on these traits.

Closer inspection of drl1 and drl2 via in situ hybridization revealed that the transcripts of these genes accumulate in lateral primordia, but not in vegetative meristems or developing stems. However, the drl mutants have reduced meristem size. Thus, drl1 and drl2 appear to function in a non-cell-autonomous manner. Specifically, the drl gene products might act in pathways that traverse boundary domains or peripheral layers of the primordium to regulate developmental programs at the shoot apex, thereby affecting a suite of leaf and stem architectural traits. The dose-sensitive effect of these genes suggests that threshold levels of drl gene products are crucial for their function.

Mining for drl alleles with strong effects in even larger NAM populations might help breeders produce maize plants with improved leaf and stem architecture. In addition, further analysis of drl1 and drl2 should shed light on the establishment of leaf form at the molecular level. Approaching the problem of stem architecture from both angles has already yielded exciting results.

BEN, ROB, and the Making of a Petunia Flower