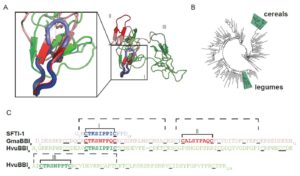 Many seeds produce protease inhibitors that are thought to help protect them from pathogens and predation. One class are the Bowman-Birk Inhibitors (BBIs), which form folded loops that specifically bind to and inhibit trypsin and/or chymotrypsin proteases. Originally characterized from legumes, BBIs were subsequently identified in cereals, although those in cereals lack the chymotrypsin-inhibitory loop. James et al. identified BBI sequences in the lycopod Selaginella maollendorffii and showed that these proteins have trypsin-inhibitory function. They subsequently identified BBI sequences in other angiosperm genomes, and they argue that BBIs have an ancient evolutionary origin but that the genes have been lost in many plant lineages. Plant Cell 10.1105/tpc.16.00831