In the legume-rhizobium root nodule, nitrogen fixing rhizobia are accommodated inside plant cells. In the Medicago – Sinorhizobium model system, the internalization of rhizobia into the host plant is triggered by Nod factors secreted from the symbiotic bacteria. The signals are perceived by the host receptor-like kinase NFP, which interacts with two other kinase receptors LYK3 and DMI2 to induce nuclear calcium oscillations, a hallmark of symbiotic interactions. The calcium spikes activate the transcription factor IPD3 via the calcium-calmodulin-dependent kinase DMI3, thus triggering root hair re-polarization and root nodule formation. Susceptible root hairs go through a transient growth retardation and deform subsequently into infection chambers and infection threads, which ultimately deliver the symbionts to the developing root nodules (Fournier et al., 2015). Significant actin re-arrangement has been shown to initiate root hair deformation and several genetic components involved in this deformation have been identified (Gavrin et al., 2015). By contrast, much less is known about the role of microtubule (MT) reorganization during rhizobial infection. 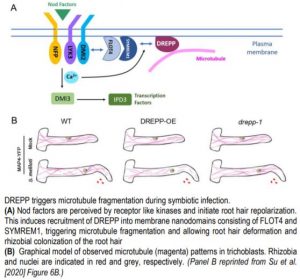 DREPP proteins regulate both actin and MTs in a calcium-dependent manner in Arabidopsis. A new study by Su et al. (2020) proposes that DREPP triggers MT fragmentation in functional membrane nanodomains during symbiotic infection in Medicago truncatula.

The authors found that the number of responsive root hairs and nodules was significantly reduced in drepp mutants during root infection by rhizobia, suggesting that DREPP is required for symbiotic infection and nodule formation. In uninoculated Medicago root hairs, DREPP-GFP localized to the plasma membrane (PM) via myristoylation and a strong polybasic cluster at the N-terminus. Application of calcium and Nod factors or inoculation with the symbiotic Sinorhizobium induced DREPP re-localization into punctate structures at the PM. The lateral segregation of DREPP into membrane nanodomains was abolished in the LYK3 and DMI2 receptor mutants, but was rescued by application of exogenous calcium, suggesting that calcium plays a major role in DREPP localization. Membrane nanodomains labeled with LYK3 and scaffolding proteins FLOT4 and SYMREM1 have recently been shown to be required for successful root colonization by rhizobia (Liang et al., 2018). The authors speculated that DREPP might also associate with FLOT4 and SYMREM1 upon inoculation with bacterial symbionts. Indeed, DREPP recruitment to nanodomains was impaired in both flot4 and symrem1 mutants and was not recovered by calcium treatment, indicating that FLOT4 and/or SYMREM1 are essential for DREPP re-localization into nanodomains (see Figure). Co-immunoprecipitation and Fluorescence Lifetime Imaging Microscopy suggest that DREPP directly interacts with FLOT4 and SYMREM1.

How does DREPP regulate MT organization during root hair repolarization? Using co- immunoprecipitation, DREPP was shown to interact with MTs at the plus end. 7 days after inoculation with the symbiotic Sinorhizobium, when DREPP re-localized into nanodomains, MTs were found to be occasionally fragmented. DREPP-overexpression induced pronounced MT fragmentation and DREPP-labeled nanodomains aligned with fragmented MTs. No MT fragmentation was observed in drepp mutants. Thus, as a newly discovered player during rhizobial infection, DREPP is recruited into membrane nanodomains and controls MT reorganization by interfering with the plus end. 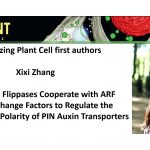 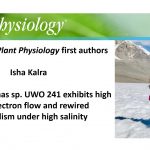