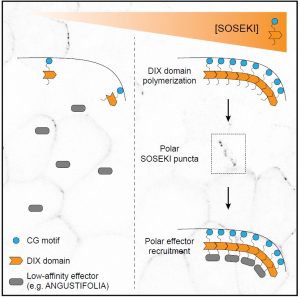 In multicellular organisms like plants, asymmetric cell division can arise from cell polarity. The signals that establish cell polarity relative to the body axis are unknown in plants. In Arabidopsis, SOSEK1 was previously identified as having a polar distribution. SOSEK1 has a DIX domain similar to the DIX oligomerization domain of the Disheveled protein involved in the establishment of polarity in animal cells. In this paper, Van Dop et al. determined the conservation and function of DIX domain-containing proteins across kingdoms. In Physcomitrella patens and Marchantia polymorpha, SOSEK1 is also localized polarly suggesting a conserved role. Structural and protein interaction analyses suggest that Arabidopsis SOSEK1 oligomerizes and this is crucial for polar localization. Pull-down assays of SOSEK1 expressed in Arabidopsis roots identified ANGUSTIFOLIA, which influences cell division. Polar localization of ANGUSTIFOLIA in Arabidopsis is altered when DIX-mediated oligomerization of SOSEK1 was hindered suggesting an important role of ANGUSTIFOLIA-SOSEK1 interaction in plant cell polarity. Thus the conservation of the DIX domain and its functional mechanism in plants is uncovered. (Summary by Suresh Damodaran) Cell  10.1016/j.cell.2020.01.011 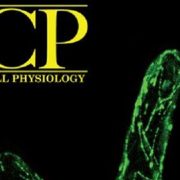 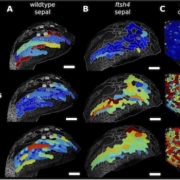 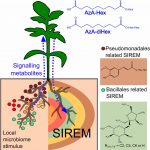 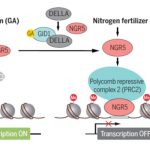